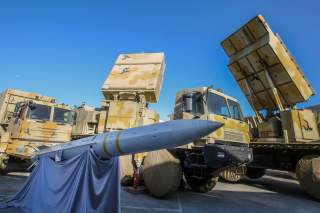 The Iranian missile strike on Al-Assad air base in January marked the first time in history that U.S. forces have been on the receiving end of a large-scale, long-range, precision-guided missile attack. Buried beneath the headlines, there is a hard truth that Department of Defense officials, Congress, and the American public must acknowledge: the monopoly on precision-guided munitions—and the “American way of war” that has enabled unfettered freedom of action since the end of the Cold War—is officially dead. This unprecedented attack on deployed U.S. troops should serve as a wake-up call, forcing leaders to address vulnerable basing postures in the Middle East and other contested regions.

Since the end of the Cold War, the United States has operated under the assumption that it could access and utilize bases worldwide—at a time and place of its own choosing—unmolested in times of crisis or war. Without the threat of reciprocity, the military could assemble large forces nearby and conduct undisrupted operations throughout the spectrum of military conflict.

Of the more than 60,000 U.S. troops currently deployed to the Middle East, most operate from headquarters at nearby bases in countries such as Bahrain, Kuwait, and Qatar. Many of these facilities, such as the Combined Air Operations Center at Al Udeid, house ever-growing concentrations of U.S. forces performing various non-combat support activities from highly centralized locations.

Having spent a significant portion of my twenty-year military career stationed overseas or deployed to the Middle East, I am intimately familiar with the posture of such bases. I’ve dined in the large facilities with hundreds of my closest friends. I’ve slept in the long rows of tents and trailers. I’ve used publicly available satellite imagery and GPS on my smartphone to find my way to work or the gym. This posture—presenting concentrations of support personnel in open, visible, and vulnerable areas—reflects a past where the threat of precision attacks did not exist. Iran just demonstrated both an ability and willingness to conduct such attacks.

Many of the technologies that enable PGM development and employment—microprocessors, space-based communication and navigation, access to satellite imagery—have been commercially available for years. It should come as no surprise that Iran—a country who ranks twenty-eight in GDP globally, between Nigeria and Austria—could incorporate these technologies into indigenously produced ballistic missiles, capable of delivering 1,500 pound warheads more than 500 miles and hitting targets with relative precision. What should come as a surprise is that the air base that launched the attack against Maj General Solemieni days prior was entirely unprepared for a counter-attack. Had the Iranians targeted other facilities and not provided warning to U.S. and Iraqi personnel hours before the strike, the casualties certainly would have been far worse.

This criticism is not directed at the brave men and women at Al-Assad or others forward deployed to the Middle East. Rather, the Iranian attack should serve as the proverbial canary in the coal mine, demonstrating that the operational landscape in the Middle East—and other regions where adversaries wield robust anti-access/area denial, or A2/AD, systems with long-range PGMs at their core—has fundamentally changed.

For more than a decade, defense analysts have criticized vulnerable overseas basing postures, urging leaders to adopt new operational concepts given the broad proliferation of adversary A2/AD systems. A 2011 study from the Center for Strategic and Budgetary Assessments, or CSBA, entitled “Outside In: Operating from Range to Defeat Iran’s Anti-Access and Area-Denial Threats” addresses this topic directly. A more recent 2017 study from the Center for New American Securities, or CNAS, warns of the far more vulnerable U.S. basing posture in the Western Pacific. The authors paint a grim picture of how China could inflict catastrophic casualties—far greater in size and scope than the Imperial Japanese attack on Pearl Harbor—if they launched a conventional missile attack on U.S. bases in the Pacific.

These studies—and many others in recent years—recommend posture realignment, diversifying and hardening forward bases, disaggregating concentrated forces and functions, deploying active and passive deception techniques such as camouflage, concealment, and deception, and fielding various emerging technologies such as directed energy weapons that provide terminal defense against cruise and ballistic missiles at negligible cost-per-shot. None of these initiatives have come to fruition.

The Iranian ballistic missile strike demonstrates that the era of uncontested military operations from nearby bases is officially over. Leaders have long acknowledged this shift in the operational landscape yet failed to implement meaningful change. This failure to adjust basing postures and implement new operational concepts, as well as field new technologies to harden base defenses, leaves forward-deployed U.S. forces vulnerable to precision attack from proven adversaries.

Cmdr. Kevin Chlan, U.S. Navy, is a Federal Executive Fellow at the Center for Strategic and Budgetary Assessments in Washington, D.C. He is a 19-year F/A-18 pilot with over 3,500 flight hours who recently commanded Strike Fighter Squadron 31.

Required disclaimer: The views expressed herein are those of the author and do not reflect the official policy or position of the U.S. Navy, U.S. Department of Defense, or the U.S. government.