Why the Kurds are Paying the Price for America's Mistakes 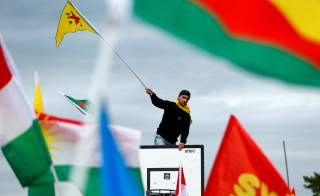 Less than a week after the start of Operation Peace Spring, Turkey’s military incursion into predominantly Kurdish northeast Syria, the balance of power in the protracted Syrian war has rapidly changed hands. The operation immediately garnered widespread criticism from the international community. While it is undeniable that civilians have once again been tragically exposed to conflict in Syria, observers have been inconsistent in their review of the context for Turkey’s actions as well as its likely objectives. Turkey’s president Recep Tayyip Erdogan had long sought U.S. support to establish a safe zone that would reach twenty miles inside Kurdish-run northeast Syria, clearing its southern border from a “terror corridor.” As recently as last month,  Erdogan even spelled out his intentions at a speech to the UN General Assembly.

Turkey’s military operation into northern Syria, the third in three years, is the culmination of Ankara’s lengthening string of objections to U.S. support for the Kurdish People’s Protection Units (YPG), the Syrian branch of the outlawed Kurdistan Workers’ Party (PKK), which has waged a three-decade long insurgency against Turkey and is designated a terrorist organization by the United States and much of the international community. Since the onset of the war in Syria, large swathes of northern Syria were run by the Democratic Union Party (PYD), the political wing of the YPG, amidst growing Turkish frustration with Washington’s misguided insistence that the two groups are separate entities.

Now, against the backdrop of cries of betrayal raised by the PYD-YPG and its supporters, the Trump administration’s latest decision is a reminder that the United States never actually made a promise of indefinite military sponsorship nor pledged to secure an autonomy arrangement on behalf of the Kurds. To varying degrees, the United States sought to support the YPG as a combat ready force against ISIS sleeper cells; assert leverage over the Assad regime; and contain Iranian and Russian influence in Syria. However, the major reversal in U.S. foreign policy as set out by Trump has now put these goals in question.

So, what did the United States get wrong in its policy approach in northern Syria?

First, for too long Washington believed it could get away with creating a false distinction between the YPG and PKK even as Turkey showed mounting evidence of its security concerns. The United States has been arming the YPG, a valuable asset in the battle against ISIS, since 2014. Later, an umbrella structure known as the Syrian Democratic Forces was created to include Arab and other elements, but it was still dominated by the Kurdish militia.  Washington’s two-sided approach stemmed from a tension between President Donald Trump, who in December 2018 defended pulling out American troops following the defeat of the so-called Islamic State, also known as ISIS, and those who lobbied for continued U.S. presence in northern Syria.

For Turkey, this only confirmed its fears about an America’s plan to hide the PKK/YPG militia in plain sight. As a result, Turkey is now exercising its legitimate right under international law to militarily deter what it sees as a hostile, armed non-state actor harboring long-term irredentist desires along its southern border. Turkey pointed to YPG guarded fortifications, tunnels, weapon stockpiles and control posts in areas along its border, but its grievances fell on deaf ears.

Unfortunately, as the war in Syria was winding down and ISIS was effectively defeated, the United States missed an opportunity to recalibrate its balancing act between Turkey, a longstanding ally in the conventional sense on one hand, and the PYD/YPG on the other. U.S. policymakers could have done more much sooner to shift their strategy to influence the PYD to conduct its affairs like a Syrian Kurdish party acting within the borders of the Syrian state rather than a conduit of the PKK command structure nestled in the Qandil mountains in northern Iraq.  To be sure, this was never an easy task.

Over the course of joint coalition military operations in the anti-ISIS battle, the United States deepened its considerable clout over the PYD/YPG. At the same time, it was clear that the PYD-run administration was unlikely to survive an attack by the Turkish Armed Forces and doomed to suffer militarily without the protection of American air cover. Motivated to maintain its grip on its territory, its arsenal of military assets and leverage U.S. sponsorship to strike an autonomy deal with Damascus that would outlast the war, certain factions within the PYD may have been prepared to make greater concessions to limit its umbilical ties with the PKK.

Additionally, the strategic-military value assigned to the YPG-dominated SDF by the United States, perhaps counterintuitively, enabled the PYD to install one-party rule in areas under its control, pushing out rival political factions and lending legitimacy to the claim that the party-militia was the only voice representing Kurdish interests in Syria.

Stuck between a rock and a hard place, within days of the start of Operation Peace Spring the PYD/YPG agreed to a deal with the Assad regime that looks to be brokered by Russia. As a result, Syrian army tanks and heavy weaponry have entered PYD-run enclaves for the first time since the start of the war.  Unconfirmed terms of the agreement suggest that the Kurds were promised recognition of their national identity and a constitutionally sanctioned form of autonomy; however, much can change during challenging negotiations over the new postwar Syrian constitution. Through a series of missteps, the United States has created uncertainty for the Kurdish population in Syria.

In another example of its muddled policy in Syria, Washington is preparing to impose crippling economic sanctions on Turkey for conducting an operation that the U.S. president green-lighted. Indeed, over the past week the conversation in the U.S. media over Turkey’s conduct during the operation has been one-sided. Turkey has been falsely accused by critics of committing “ethnic cleansing,” even genocide, in northern Syria. Regurgitating such long debunked “ancient hatred” arguments about the Turks and Kurds does a great deal of disservice to the people of the region who in fact live peacefully together. Moreover, media reporting has been inextricably interconnected with the looming momentum for impeachment of Trump, creating an opportunity for his critics to lambast the administration. This has meant that Turkey’s actions against the militia, which U.S. Special Envoy for Syria James Jeffrey previously called a “tactical and temporary ally,” have been especially amplified.

Whilst the Kurdish fighters were at the forefront of the brutal fight against barbaric ISIS fighters, observers racing to reprimand Turkey fail to mention that the YPG/PYD do not have a clean track record in their bid to govern northern Syria. The PYD and its armed militia committed violence against civilians, a fact substantiated by reports in Arab-populated areas that have been documented by Human Rights Watch. These reports describe human-rights abuses against civilians and minorities—including Assyrian and Turcoman communities and political opponents—and forced deportation. To be sure, Turkey will need to give credible commitments to address the grievances of its own Kurdish citizens through the protection of human rights, political participation and democracy. Indeed, its shortcomings in upholding Kurdish rights at home is one of the reasons Ankara is now losing the international public relations war. But holding Turkey hostage to the threat of violence from across its borders in Syria and Iraq does not advance this goal.  According to Turkish officials, twenty civilians have been killed and many injured as a result of shelling from the Syrian side of the border into Akcakale and other Turkish towns.

To be sure, there are severe challenges to influencing a PYD-PKK split, but now the Kurds in Syria are faced with the reality that whatever gains they believed themselves to have won may be lost for good. The split will take place, even if superficially, under the oversight of the Syrian government. Unconfirmed details of the new agreement reveal that the YPG will be disbanded and reconstituted as Syria's Fifth Army.

Had a viable shift in the YPG-PKK dynamic occurred, perhaps through backdoor U.S.-Turkey agreement on the merits of such a joint policy goal rather than misleading messages promising long-term American commitment, then the Kurds in Syria could have enjoyed greater stability at the end of the Syrian war. While many in Washington rue the loss of their Kurdish allies in Syria, the greater injury is the reality that the United States has lost its strategic foothold in Syria in what looks like a post-America Middle East as Russia continues to deepen its influence in the region.

Burcu Ozcelik is a research fellow in the Department of Politics and International Studies at the University of Cambridge.