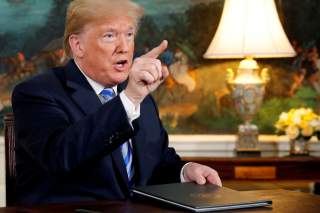 Iranians have long achieved political self-assertion with respect to foreign powers. Secretary Pompeo's meeting with largely fringe and fragmented Iranian opposition figures does not change the fact that the administration's approach hurts ordinary Iranians, sabotages the political opposition in Iran and empowers the most diehard theocrats in Tehran.

If Washington is sincere in supporting the aspirations of the Iranian people for improved civil liberties, human rights, and prosperity, it must recognize such progress can only be realized through grassroots organic political change—not on the heels of Trump and his autocratic regional allies.

Sina Toossi is a Research Associate at the National Iranian American Council (NIAC).

Image: FILE PHOTO: U.S. President Donald Trump speaks to reporters after signing a proclamation declaring his intention to withdraw from the JCPOA Iran nuclear agreement in the Diplomatic Room at the White House in Washington, U.S. May 8, 2018. REUTERS/Jonathan Ernst/File Photo​