Will America and Iran's 'Drone War' Turn Into a Real War? 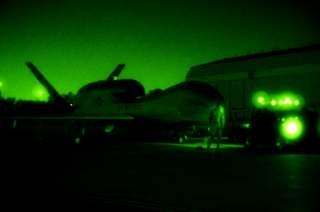 The Trump administration claims to have destroyed an Iranian drone that was “threatening” a U.S. warship off the coast of Iran on Thursday, but it did not clarify whether the drone was armed. The incident was the latest in a series of incidents between the United States and Iran in the strategic Strait of Hormuz, pushing both countries to the brink of war. Unlike in past incidents, however, both sides carefully described the alleged drone shootdown.

President Donald Trump claimed that the U.S. Navy destroyed “an Iranian drone which had closed into a very, very near distance, approximately one thousand yards” from the USS Boxer in the Strait of Hormuz. Trump calling it “the latest of many provocative and hostile actions by Iran against vessels operating in international waters.” The president claimed that the Iranian drone was “ignoring multiple calls to stand down and was threatening the safety of the ship and the ship’s crew,” but was “immediately destroyed.”

Pentagon Spokesman Jonathan Hoffman reiterated Trump’s claims: “At approximately 10 a.m. local time, the amphibious ship USS Boxer was in international waters conducting a planned inbound transit of the Strait of Hormuz. A fixed-wing unmanned aerial system (UAS) approached Boxer and closed within a threatening range. The ship took defensive action against the UAS to ensure the safety of the ship and its crew.”

Iranian foreign minister Javad Zarif seemed to deny the incident outright. In an exclusive interview, he told National Interest editor Jacob Heilbrunn that “we do not have any information about having lost a drone today.”

A few hours later, both Iran’s regular armed forces and the Islamic Revolutionary Guard Corps denied losing any drones in separate statements to the semi-official Fars news agency, although the latter admitted that its drone had approached the USS Boxer. “Images will show that the drone of the [Islamic Revolutionary Guards] Corps Aerospace Force had been in the area carrying out its current mission before the arrival of the American frigate to the Straits of Hormuz,” an unnamed Revolutionary Guard spokesman told the news agency. “Including observation and surveillance images of the aforementioned frigate it was transmitting back to base, before and even after the time of the Americans’ allegations. [The drone] returned back to base safely." Deputy foreign minister Abbas Araghchi even suggested on Twitter that the “USS Boxer has shot down their own UAS by mistake!”

U.S. forces in the Persian Gulf have a “tacit agreement” with their Iranian counterparts to announce themselves in Persian, said Sina Toossi, research associate at the National Iranian American Council. “I know in the past that some of the incidents where the Revolutionary Guard harasses U.S. ships in the Persian Gulf, this usually is a case of these ships not announcing themselves or not communicating with the Revolutionary Guard, so they harass them until they get that communication.”

In a phone call with the National Interest, Toossi said that he does not know whether this is true of the incident involving the USS Boxer, but that this has “generally been the history on these kinds of instances.”

The Strait of Hormuz is crucial to the world economy, as twenty-one million barrels of crude oil (equal to around 21 percent of global oil consumption) pass through every day. Iran has previously threatened to close the strait if it cannot export oil. Under the Obama administration, the United States had agreed to lift economic sanctions on Iran in exchange for Iran allowing international inspectors to observe its nuclear program. Trump announced his intention to break the deal in May 2017, beginning a “maximum pressure” campaign to force U.S. allies not to buy Iranian oil.

“Iran is ready. It is switching to a sort of tit-for-tat strategy,” Toossi had told the National Interest last week. “Over the past year, they were in the nuclear deal. They exercised restraint, trying to negotiate with the Europeans. For the past month, month and a half, we're seeing these escalations from Iran.”

The United States accuses Iranian forces of attempting to blow up two tankers in the Strait of Hormuz on June 13, which Iran denies. It has provided fragments resembling Iranian-made limpet mines and circumstantial evidence of Iranian military speedboats in the area, but some doubt the U.S. account.

A different incident involving a drone brought the United States and Iran to the brink of war last month. Iranian forces shot down a $200 million U.S. surveillance drone near the Strait of Hormuz, claiming that the aircraft had penetrated Iranian airspace. The U.S. government, meanwhile, asserted that Iran had launched an unprovoked attack on a U.S. aircraft in international waters. That night, Trump reportedly ordered airstrikes against Iran in retaliation, but changed his mind at the last minute, claiming that lethal force was not a “proportionate” response.

This time around, both sides were eager to move past the incident. Trump’s tone seemed more regretful than angry, and his statement ended with a call for countries to protect their own shipping in the Persian Gulf. Other than Zarif’s ambiguous denial, Iranian media did not make public any statements from senior officials in the hours following the incident.

It is, “in some ways, reassuring for this to be the U.S. response, in that it is measured, it is another unmanned drone,” Toossi said. “Iran shot down the U.S. drone, now the U.S. shot down the Iran drone, and hopefully this leads to a scenario where tensions dissipate somewhat as opposed to escalating more.”