Will America Be Safer After the Assassination of General Suleimani? 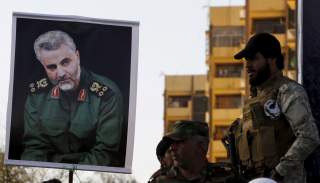 In the aftermath of President Donald Trump’s decision on Thursday to assassinate Gen. Qassim Suleimani, the most prominent military figure in Iran since the 1979 Revolution and the second most powerful person in Iran after the supreme leader, the essential question is: what happens now?

To answer this question, rewind back to the 1980 presidential debate between Ronald Reagan, who was the governor of California at the time, and President Jimmy Carter. In his concluding remarks, Reagan asked one simple question: Are you better off now than you were four years ago?

To assess Trump’s decision to assassinate Suleimani, Reagan’s question forty years ago is still pertinent. We should ask a similar question: are we better off now than we were before the assassination? Considering the hierarchy of American national security interests, we should disaggregate this question. First, is the American homeland safer? Second, are Americans living, traveling, or working abroad and our troops stationed abroad safer? And third, are American allies safer? The answer to all three questions is decisively no.

First, the American homeland is less safe. Trump’s decision is analogous to Iran assassinating Vice President Mike Pence, Secretary of Defense Mark Esper, or the Chairman of the Joint Chiefs of Staff Army Gen. Mark Milley. Despite the profound and complex political divisions inside Iran, virtually all major government figures—from reformists to hardliners—have now rallied around the same line: retaliation. On Friday, Iran’s Supreme Leader Ayatollah Ali Khamenei declared: “A severe revenge awaits the criminals who stained their hands with his and the other martyrs’ blood last night.” Meanwhile, President Hassan Rouhani echoed these remarks: “With no doubt, Iran and other countries in the region will take his revenge.” Or as Foreign Minister Javad Zarif, one of the architects of the Iran nuclear deal, said, “The brutality and stupidity of American terrorist forces assassinating Commander Suleimani will undoubtedly make the tree of resistance in the region and the world more prosperous.” In response to these and other threats, major American cities like New York and Los Angeles have beefed up security.

Although Iran has amplified its rhetoric and symbolically raised the red flag of vengeance over its religious sites for the first time in the Islamic Republic’s history, the overall probability of an Iranian attack on the American homeland remains low. Iran’s leaders are not suicidal and will not launch a major attack on the soil of a nuclear superpower. The real threat, however, is that Iran will view the assassination of its top military commander as the “last straw” in a saga of humiliation since Trump withdrew from the Obama administration’s signature Iran nuclear deal. Indeed, Iran’s hardliners now have all the domestic political capital they need to pressure its leaders to withdraw from the deal and put the country back on track toward a nuclear weapon. Compare the sentiment of the Iranian public last month to today. Just a few weeks ago, tens of thousands of Iranians protested against the regime in mass demonstrations demanding change. Today, the tide has turned, as millions of Iranians march the streets of Tehran protesting against the United States and Israel.

If Iran reboots its nuclear weapons program, then America will be in a double-bind. If Iran gets the bomb—even if it lacks an ICBM to strike the American homeland—it can still sell nukes to terrorists or proxies who can detonate them in major American cities. If the Trump administration launches a preventive attack to delay Iran’s ability to build the bomb, then the result will be a general war in the Middle East. Compared to the Iraq War, which took fifteen years and cost five thousand American lives, hundreds of thousands of Iraqi lives, and $4 trillion, a war with Iran would be an unmitigated catastrophe. Iran is four times the size of Iraq, has twice the population, has ballistic missiles deployed across the Middle East, and has proxies in Lebanon, Syria, Iraq, and Yemen. In sum, the assassination significantly increases the likelihood that Iran will try to escape from the nuclear penalty box, thus making war more likely than not.

Second, American citizens, diplomats, and troops stationed abroad are far less safe. Although Secretary of State Mike Pompeo said on Friday that “Suleimani was actively plotting in the region to take actions that would have put dozens if not hundreds of American lives at risk,” the costs of the assassination clearly outweigh the claimed benefits. Even if Pompeo was correct in saying that Suleimani was “actively plotting in the region,” assassinating Iran’s top military leader increases the probability that such plots materialize. In other words, to prevent a future attack by Iran, the Trump administration took action that made the likelihood of an attack higher. Furthermore, it is unclear how killing one military leader of a state actor materially weakens such plots. Khamenei has already appointed another military commander to take Suleimani’s place as the leader of the Islamic Revolutionary Guard Corps (IRGC)’s Quds Force. Moreover, the IRGC has sufficient institutional knowledge to continue its regional operations in the absence of Suleimani.

The only effect of Suleimani’s assassination is igniting the animosity of IRGC members and Iranian-backed proxies toward America. The easiest target? Americans living abroad. Reprisals against U.S. troops in Iraq are all but guaranteed. The Chief U.S. Negotiator for the Iran Nuclear Agreement, Ambassador Wendy Sherman, has warned that “There will be terrible reprisals. They will likely happen in the Middle East, but they could likely happen anywhere in the world. And we have people all over the world that could become targets.”

Third, American allies are less safe. Although Israeli prime minister Benjamin Netanyahu views Suleimani’s assassination as a welcome distraction from the corruption and bribery charges hanging over his head, Netanyahu does not equal Israel by any stretch of the imagination. While Netanyahu celebrates, Israeli security officials will need to be on extremely high alert. Although Israel is a nuclear weapons state, Iran has thousands of ballistic missiles deployed in Gaza, Lebanon, Syria, and Iraq. Given Israel’s small population and tiny strategic depth, a general war in the Middle East would impose unacceptable costs on Israel no matter how much Netanyahu places his own political ambitions above Israel’s security. Moreover, given fears of an impending attack, NATO has suspended its training of Iraqi Forces to counter ISIS. In addition, France’s deputy minister for foreign affairs, Amelie de Montchalin, has said that Suleimani’s assassination has made the world “more dangerous” and a spokesperson for German Chancellor Angela Merkel stated that the crisis has reached “a dangerous point of escalation.”

Unless the Trump administration initiates talks with Iran (perhaps in secret or through third-party intermediaries), the current crisis will spiral into an unnecessary general war in the Middle East. Absent robust efforts to de-escalate the situation, Trump, who criticized President George W. Bush’s decision to invade Iraq in 2003 as the “worst single mistake in U.S. history,” is about to one-up his predecessor. In sum, the decision to assassinate Suleimani has made Americans worse off than we were just a few days ago. But let us not make it worse before it gets worse.

Daniel K. Khalessi is a Research Associate at the Harvard Weatherhead Center’s Project on Shi’ism and Global Affairs. He is a J.D. Candidate at Stanford Law School and holds an M.A. from Yale’s Jackson Institute for Global Affairs, an M.A. from Peking University, and a B.A. from Stanford, where he was the first graduate in Iranian Studies.