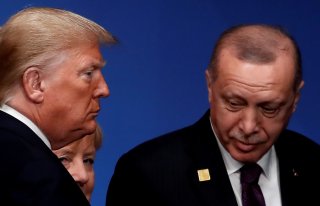 It is no secret that America’s alliance with Turkey is hanging on by a thread, but it is time to let go.

U.S. foreign policy officials desperately want to believe it is dealing with the Turkey of the past. The model of the Middle East, the European Union candidate, the reliable NATO partner no longer exists. American decisionmakers should not wait to hope to restore ties once Erdogan is out of the picture. To put America’s national security interest first, we must realize that Turkey is not coming back.

Erdogan's earliest strategy included a “zero problems with the neighbors” policy. This idealistic approach was likely to fail from the start. Erdogan’s desire for expansion and the restoration of Ottoman lands across the Middle East and North Africa was his biggest obstacle.

It was Erdogan who said, “democracy is like a train: when you reach your destination, you get off.”

Today Turkey is riddled with many problems with nearly all its neighbors.

If we glance at a map, it is not too difficult to pinpoint Turkey’s tensions in the region.

In Syria, Turkey was known to have links with the Islamic State. In a study conducted by a team of Columbia University researchers in 2014, they revealed Ankara’s deep ties with the terror organization. Turkish soldiers allowing ISIS terrorists to cross the Turkish-Syrian borders with the permission of Ankara. ISIS terrorists were also taken to Turkish hospitals when wounded. Turkey assisted in ISIS recruitment. Turkey smuggled Syrian oil from the now toppled Caliphate. And more. To make matters worse, it is known that Turkey knew the whereabouts of Abu Bakr al-Baghdadi, the Caliphate’s leader. Yet Turkey did not reveal this information to the United States. Due to distrust, the United States did not notify Turkey when it decided to kill Baghdadi. Instead, the U.S. worked closely with its Kurdish partners. Turkey has also conducted full military campaigns against American allies the Kurds. Most recently when American troops withdrew in October 2019.

In Iraq, Turkey continues to conduct air and ground invasions violating Iraq’s sovereignty. Turkey claims it is attacking Kurdish militants, the Kurdistan Workers Party. But it seems only civilians are being killed. Turkey recently targeted refugee camps in northern Iraq. The Yezidi minorities once targeted by ISIS now fell victim to Turkey's aggression. The Iraqi government called for Turkey to leave but it is too weak to enforce its demands. Turkey is now planning more military bases in the country. Turkey claims the majority of Iraq is old Ottoman territory thus belonging to Turks.

With Iran, Turkish cooperation has increased. Under Erdogan, the Turkish economy quickly grew. This required vast amounts of energy resources, which Turkey lacks. Iran has plenty to provide. Despite U.S. sanctions on Iran, Turkey has vowed to increase economic ties. Iran is Turkey’s second-largest supplier of natural gas and an important oil supplier. Erdogan has promised to continue purchasing natural resources from Iran. Saying “it is impossible for us to cancel relations with Iran with regard to oil and natural gas. We will continue to buy our natural gas from there.” Turkey’s foreign minister also promised to increase trade ties to $30 billion.

It doesn’t stop at economic ties. Both countries have significantly increased their military cooperation targeting Kurdish fighters. Including conducting military operations in the autonomous Kurdistan Region of Iraq. Erdogan has also met with Iranian President Hassan Rouhani on many occasions. Such relations undermine American presence in the region and in Syria.

In the Gulf, Turkey has only but one ally––Qatar. Turkish-Qatari relations are held together by the Muslim Brotherhood ideology. Gulf countries, Bahrain, Saudi Arabia, and the United Arab Emirates are wary of Erdogan’s expansionism. Since the Arab Spring in 2011, Turkey has aimed to fill the vacuum in the region. Turkey aided and boosted Qatar when the island state faced a siege from its neighbors. At one point, Turkish lawmakers even proposed deploying the Turkish military to Qatar. Qatar has also pledged $15 billion in investment and credit lines to assist Turkey’s faltering economy. Perhaps the price of Turkey’s early aid during the siege.

With Egypt, Turkey has ruptured its relations since the Arab Spring. The ousting of the late Muslim Brotherhood president Mohammad Morsi worsened relations. Turkey’s ideal scenario for Egypt is for current President Abdul Fattah al-Sisi to be replaced with a Morsi-like government. According to secret wiretaps, Erdogan’s chief of staff Hasan Dogan said “God willing, I predict that this [ouster of Morsi] will lead to an explosion, a bigger and more dynamic change in Egypt within three to five years.” But unlike Syria, Egypt does not have a civil war. Turkey has little room to inject its influence or to conduct military operations on Egyptian soil. Relations have deteriorated economically too.

Turkey is also sidelined in the eastern Mediterranean. Gas discoveries have formed a partnership between Egypt, Greece, Cyprus, and Israel. In response, Turkey vows to drill in areas outside of its territorial waters.

Due to Turkey’s military intervention in Libya, Cairo has signaled it is prepared to intervene militarily. Sisi has stated if the Libyan people “asked us to intervene, this would be a signal to the world that Egypt and Libya are one country, one interest.”

In a warning to the Arab world, the former secretary-general of the Arab League and former Egyptian Foreign Minister Amr Moussa stated that Turkey “is more dangerous to the Arab world than Iran due to its strategic capabilities, as it is a member of the NATO, and has a huge strategic relationship with the United States and the same with Russia, and also has interlocking interests with the European Union.”

Turkey has also tarnished its ties with Israel. Turkey views itself as the true custodian of Jerusalem, not Jordan. Turkey has been the most outspoken on Israel moving its capital from Tel Aviv to Jerusalem. At one point Erdogan vowed to unite an “army of Islam” to conquer the historical city. Most recently, Turkey’s minister of religious affairs Ali Erbas vowed to mobilize an Islamic Ummah against Israel. Erbas continued “our struggle will continue until Jerusalem is completely free.” Under Erdogan, Turkey has also openly solidified ties with Hamas, a designated terror organization. Erdogan is even allowing Hamas to plot attacks on Israel from Istanbul, Turkey’s largest city.

Turkey’s defiance and military expansion in the Middle East comes at a time when American appetite for staying in the region is at its lowest. Under the current U.S. administration, Turkey has been emboldened. Knowing America will not obstruct its ambitions. But this is a mistake. Americans must look at Turkey for what it is and not what it used to be. To limit Turkey’s aggression, America must put in place a “maximum pressure” campaign on its economy as we did to Iran. The more passes we give to Turkey, the more difficult it will be to constrain it in the future.

Diliman Abdulkader is the co-founder and spokesman for American Friends of Kurdistan, a Washington-based advocacy and education organization working to strengthen American-Kurdish relations.