Will Iran Move from Stand-Off to Stand Down? 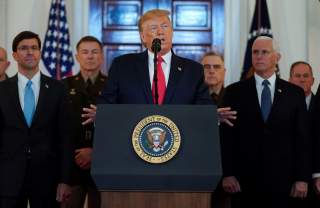 The fierce rhetoric from senior Iranian officials after last night’s rain of missiles into Iraq seems completely at odds with the results of the strike. The “revenge” attack—a response to the killing of Maj. Gen. Qassim Suleimani—appears to have been ineffectual. Rather than make the mullahs look tough, the missile escapade raises the possibility that the regime may be mired in a quagmire of its own making.

U.S. military officials must be wondering what Iran was playing at last night. The missiles it launched into Iraq are “area” weapons; they are not designed to hit a specific spot. Moreover, they had to fly about four hundred miles before reaching fairly small targets; the two bases cover only a few square miles.

If the Iranians were really serious about trying to kill Americans, they could have come up with much more effective tactics. As of this writing, neither the United States, other coalition forces nor the Iraqis report suffering any casualties.

Tehran appears to have settled on delivering a fireworks display rather than Armageddon.

Following the assault, regime officials were quick to publicly declare that the attack had concluded and that, if the United States did not attack Iranian soil, their offensive was over. This reinforced the conclusion of many that the Iranian strike was intended to be mostly symbolic. The first reaction of U.S. officials seems to have concluded the same.

At home, however, Iran declared that they had inflicted a terrible blow on America. State-run television aired videos of old, more impressive attacks (dutifully aired stateside by CNN), claiming it to be actual footage of the night’s glorious activities. The people were called into the streets, and the supreme leader gave a pep talk.

The regime concluded the day hoping it had checked the domestic box for delivering face-saving retribution. But the real question is: Were they any better off by day’s end?

Consider this from the Iraqi point of view. Iran attacked their sovereign territory. It targeted bases manned by far more Iraqis than Americans. For the many Iraqis who don’t want to see their country become a suburb of Iran, this will only steel their resolve. The vote in the Iraqi Parliament ordering U.S. forces to leave was completely symbolic. When push comes to shove, many don’t really want the U.S. to leave.

And then consider that the attack was not an isolated move. It came on the heels of President Hassan Rouhani’s announcement that it was withdrawing its commitment to key parts of the 2015 deal to restrain its nuclear program.

That decision can only help further isolate the regime. Countries in the region will be only more wary of Iranian aggression. The Europeans are quickly losing patience with Tehran.  All the Russians and Chinese can do is call for restraint and de-escalation. Even North Korea is quiet.

Meanwhile, at home, the Iranian economy is a shambles. More anti-regime protests are still a possibility. The death of Suleimani doesn’t seem to have the rallying force the regime had hoped for; the mass funeral marches were largely staged events.

Further, if the Iranians are following the U.S. response at all, they must realize that all their sturm und drang isn’t breaking Trump’s resolve or hurting him politically.

So what will Iran do next?

They could try to lay low and ride out their increasingly uncomfortable position until the U.S. election, hoping it will deliver a more “flexible” administration to deal with.

They could try more reckless belligerence. But that might make Trump even more popular.

They certainly don’t want to overreach. They can’t afford a shooting war with the United States.

They have no path to sanctions relief without negotiation—and those negotiations would require major concessions from the mullahs—an especially bitter pill right now.

Now that the dust has settled from last night’s fireworks display, one thing is clear: Tehran has a lot of not good short-term choices.