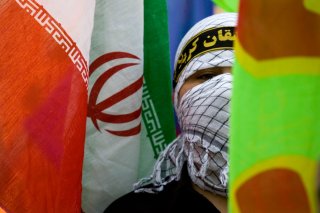 The Islamic Republic of Iran, Henry Kissinger once remarked, must decide whether it is a nation or a cause. But the regime’s choice has been clear since its founding four decades ago: it is a revolutionary project—and an imperial one at that. And Tehran now aims to spread its empire to Israel’s doorstep.

Violence is rising in the Palestinian Authority-controlled (PA) West Bank, also known as Judea and Samaria. But many members of the press and policymakers are failing to ask why.

Fatah, the movement that dominates the PA, is deeply unpopular. Mahmoud Abbas, Fatah’s head and the president of the PA, is in the seventeenth year of a single four-year term. A March 2022 poll by the Palestinian Center for Policy and Survey Research found that nearly three-quarters of respondents want Abbas to resign.

Abbas, who will turn eighty-seven this November, has become increasingly autocratic, imprisoning—and reportedly even torturing—journalists and critics. Indeed, Abbas has centralized power in a manner exceeding that of his more infamous predecessor, Yasser Arafat.

Yet, Abbas’s grip is unsteady, and Fatah’s rivals are making inroads in key PA areas. As the journalist Khaled Abu Toameh, among others, has chronicled, entire portions of the PA-ruled West Bank are falling from Abbas’s grasp. Pro-Hamas demonstrations have become common. Battles between rival families and clans and widespread disorder have even led to some families calling for the Hashemite Kingdom of Jordan to intervene.

Nablus. Jenin. Hebron. All of these cities are teetering on the brink and have been focal points for recent Israeli counterterrorist operations. Since the spring of 2022, the Israel Defense Forces (IDF) have detained more than 1,500 terrorists in near daily raids. The operation, dubbed Breakwater, has seen Israeli troops routinely come under attack. The pace of the raids is ominous.

On Sept. 8, 2022 remarks, Israeli prime minister Yair Lapid warned of a “changing reality” in the West Bank. Earlier in the week, Aviv Kochavi, the chief of staff of the IDF, said: “Part of the increase in terrorism stems from the helplessness of the Palestinian Authority security forces, leading to a lack of governance in certain areas of Judea and Samaria, and these are fertile grounds for terrorism.”

The PA blames Israel. Ahmad Majdalani, a member of the Palestine Liberation Organization’s (PLO) Executive Committee, has said that there is “no reason” the PA should continue security cooperation with Israel. The PLO, like Fatah and the PA itself, is controlled by Abbas.

The PA’s Ministry of Foreign Affairs denounced Israel’s counterterror operations, calling them “persecution” and “oppression.” But this is two-faced. The PA’s security cooperation with Israel, while limited, has been unpopular with many Palestinians. Fatah is unlikely to shed any tears when Israel conducts operations that take out its rivals for power. But it may seek to compete with them.

Indeed, as Iranian proxies like Hamas, Palestinian Islamic Jihad, and the Popular Resistance Committees continue to make gains in PA-ruled territory, Fatah’s motto seems to be “if you can’t beat them, join them.”

As Joe Truzman, a research analyst at the Foundation for Defense of Democracies (FDD), has documented, several members of the PA security services have recently attacked and threatened Israeli troops carrying out counterterror operations. The PA, Fatah, and the PLO have long praised—even incited—terrorist attacks, and Abbas himself has refused U.S. demands to quit paying tax-deductible salaries to those who murder and maim Jews. There have even been instances in the past of PA security operatives carrying out attacks. Yet, as Truzman pointed out in FDD’s Long War Journal, the uptick suggests that “the PA is ostensibly losing control of its security services.” The PA, he warned, is witnessing “the erosion of its authority in pockets of the West Bank.”

The decline of the PA’s influence, and the commensurate rise of Iranian-sponsored rivals, is newsworthy.

The PA was created because of the U.S.-backed Oslo peace process nearly three decades ago. In return for promising to renounce terrorism and to cooperate with Israeli officials, the PA has received considerable international aid. Despite the PA’s rejection of several U.S. and Israeli offers for peace in exchange for the creation of an independent Palestinian state, support for the PA has, for better or worse, remained a linchpin of U.S. Middle East strategy ever since.

The PA used to control the Gaza Strip—only to lose elections, and a subsequent brief war, to Hamas in 2006 and 2007, respectively. These events shocked many Western observers, many of whom had believed that the more overtly Islamist Hamas represented the past, not the future.

Iran hopes to have its proxies control the West Bank, as well. As FDD’s Mark Dubowitz and David Maxwell have argued, Iran seeks to engulf Israel in a “ring of fire.” With Hezbollah ensconced in Lebanon and Syria, Hamas controlling Gaza and a weak Hashemite monarchy in Jordan, the West Bank is the final remaining outpost. Should Iranian proxies take it, Tehran would be better positioned to accomplish its stated ambition: Israel’s destruction.

The Committee for Accuracy in Middle East Reporting and Analysis (CAMERA) has been warning of growing Iranian influence in Fatah-ruled territories for years. And while Abbas has been steadfastly anti-Iran, this should not be taken for granted.

Arafat played a key role in supporting Iran’s 1979 Islamic Revolution and maintained ties to the regime for decades. Indeed, the 2002 Karine A affair, in which the IDF intercepted 50 tons of Iranian weapons bound for Arafat, played a key role in the George W. Bush administration’s decision to forswear support for the PLO chieftain. And as CAMERA has documented, in recent years, several top Fatah officials, such as Abbas Zaki, have called for renewing ties to Tehran.

For now, more violence and instability seem likely, with some analysts warning that the upcoming Jewish High Holidays, in late September and early October, will bring more terrorist attacks.

In Ernest Hemingway’s The Sun Also Rises, a character is asked how he went bankrupt. “Gradually, then suddenly,” he replies. In the West Bank, the United States might soon find itself in a similar predicament.