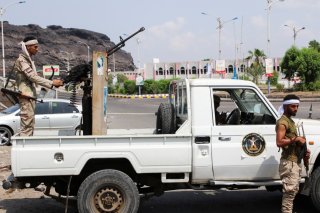 Rashad al-Alimi, the leader of Yemen’s Presidential Leadership Council (PLC) collective head of state, ordered the Southern Transitional Council (STC)—a faction of the PLC which nominally supports the internationally-recognized Yemeni government but has sought independence for Yemen’s southern regions—to cease its military operations against other pro-government forces within the south.

Alimi’s notice, issued to fellow council member and STC leader Aidarous al-Zubaidi on Monday, appears intended to stop an ongoing campaign by STC forces against the Islah Party, a second faction within the PLC widely believed to be associated with the international Muslim Brotherhood movement. In the order, Alimi claimed that all military operations in the south should be suspended pending the implementation of the 2019 power-sharing agreement, in which both sides agreed to redeploy troops within their respective areas.

The recent fighting between STC and Islah forces underpins the fragile nature of the PLC’s alliance, even as all factions within it are opposed to the Iran-aligned Houthi rebel movement in the country’s north. A truce between the Houthis and the internationally-recognized government has remained intact against all odds since April—creating Yemen’s most prolonged period of peace since the beginning of the war in 2014. However, it has not precluded clashes within the PLC, notably between the STC and Islah in the southern governorates of Shabwah and Abyan. The STC claimed on Tuesday that the fighting within Abyan was intended to cleanse the region of “terrorist organizations,” including Al-Qaeda in the Arabian Peninsula (AQAP), which has maintained an active presence in the country since before the beginning of the war.

Although Islah has long dominated Shabwah, the STC has recently made progress in the governorate. In 2020, after a surprise Houthi assault captured areas of northern Shabwah, the STC accused Islah of failing to defend the province and pushed the Houthis back with its own forces. It also engineered the removal of Shabwah’s pro-Islah regional governor, Muhammed Saleh bin Adio, in December 2021.

The STC’s animosity towards Islah originates partly from its main foreign backer, the United Arab Emirates, which has fiercely opposed the Muslim Brotherhood and views Islah as an extension of the group. The STC had previously fought against the Yemeni government and sought complete independence for its southernmost regions but agreed to join the PLC in April after the resignation of longtime Yemeni leader Abdrabbuh Mansour Hadi.