Yes the Coronavirus Pandemic Could Come for the Gulf States Next 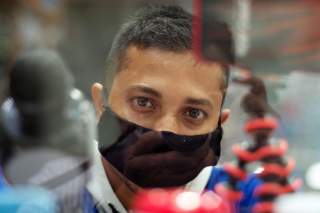 They have the busiest airport in the world, key hubs of international commerce and are a conduit for twenty percent of the world’s oil supply. Now the Gulf states and all their rapid economic success in recent years are threatened by the advance of the coronavirus pandemic. Amid the concerns about shutdowns in Europe and the United States, as well as death tolls in Iran and China, the Gulf countries’ challenges facing the pandemic have been underreported. The ramifications of what is happening in the Persian Gulf will reverberate globally as the virus spreads.

The Gulf states consist of a group of small monarchies, most of them U.S. allies where U.S. troops, CENTCOM and the Fifth Fleet are based. Along with Saudi Arabia, these states are also members of the Gulf Cooperation Council and they play a key role connecting the West to Asia, both in terms of air traffic, and in foreign policy. Now they also stand out as hard-hit by the pandemic, with Bahrain and Qatar having some of the highest per-capita infection rates. Saudi Arabia is so concerned it has canceled pilgrimages and locked down its Qatif region.

For the United Arab Emirates, the implications are staggering. Dubai International Airport saw 81 million passengers walk its halls in 2019, making it the busiest international airport. Now, like most countries, the UAE is enacting quarantine provisions for those arriving from coronavirus-affected states and has begun conducting enhanced screening. Major Gulf airlines, Emirates, Etihad and Air Arabia, are slashing prices as interest in air travel is drying up and people are forced to change destinations from places like America, China, Italy or elsewhere. Many countries are advising against unnecessary travel and restrictions on entering—such as mandatory quarantines—are making travel unlikely. For instance, Air India, which operates a popular route to the Gulf, has canceled its flights. Moreover, Dubai Airports had to downplay rumors that all flights would be canceled and the UAE has warned against the circulation of other rumors amid general pandemic jitters.

The Gulf’s vulnerability to the pandemic is two-fold. First, the economy of the Gulf states are built on a kind of ivory tower, far removed from the conflicts and poverty in the surrounding region. This vulnerability has been clear in recent instances where tensions with Iran threatened to spill over. The mining of ships in the Gulf of Oman in May and June 2019, and an Iranian drone attack on Saudi Arabia’s Abqaiq oil facility, caused the Gulf states to seek to ease tensions with Iran.

Second, the Gulf is vulnerable because a majority population of many of the smaller states are made up of expats. Even in countries with larger local populations, such as Oman and Saudi Arabia, foreigners number in the millions. This includes foreign laborers and domestic workers from Pakistan, India, Philippines, Bangladesh and other countries. Furthermore, their workforce is particularly vulnerable to a pandemic and the testing of workers is likely underreported or non-existent. For instance, one of the coronavirus cases in the UAE is a recently-arrived Indian national.

The source of most of the coronavirus outbreak in the Gulf, which stood at almost 1,100 cases on March 17, is primarily from travelers who returned from Iran. In Kuwait and Bahrain, citizens who returned from Iran spread the virus in February. Meanwhile, Qatar announced an additional 238 cases on March 11, most reportedly connected to Iran. Saudi Arabia also fears that Shi’ites in Qatif Province were also exposed through travel to Iran. In small Gulf city states, an outbreak like this is more acutely felt in daily life. The pandemic also has potential for long-term damage on all the brands and companies that use the Gulf for major activities, from sporting championships to cultural events. On a positive note, most of these countries have advanced technology and are small enough to track most cases and shut themselves off from neighbors. Many, like Kuwait, Bahrain and Qatar, are already cutting themselves off, and larger states such as the UAE, Saudi Arabia and Oman are doing the same.

But there are questions about the long-term cost. The Expo 2020 in Dubai is supposed to attract three million visitors in October. If countries are still on lockdown and world travel comes to a halt it’s hard to imagine how it will remain on track. Although the Gulf had already grown used to the land border crisis between Qatar and Saudi Arabia that began in 2017, the new travel restrictions turn each Gulf state into a kind of island, bereft of the international connections they are used to.

The looming impact on the Gulf could expose the fragility of their economies and their attempts in the last decade to have more robust foreign policies. For instance, many of these countries are involved in regional conflicts, including Saudi Arabia and the UAE’s role in the Yemen conflict and the role of the UAE and Qatar in Libya. Using their wealth, these states have made both media and cash tools to project power and influence. Qatar, for instance, plays a role funding Hamas-run Gaza, while both Saudi Arabia and the UAE have pushed a robust policy to challenge the Muslim Brotherhood in the region and speak out against Iranian proxies. The coronavirus pandemic may curtail this support for foreign policies and proxies, changing the role that the Gulf has played over the last several decades and making the countries more inward looking.

While the number of coronavirus cases has increased daily since late February—when there were fifty cases across six countries—the Gulf states may have closed their borders quickly enough to isolate themselves from the pandemic. However, this has also impacted vulnerable foreign workers. In the background, increasing U.S.-Iran tensions—marked by rocket attacks on U.S. forces in Iraq—and rolling cancelations of international travel due to the pandemic will continue to overshadow the way of life these countries have become used to.