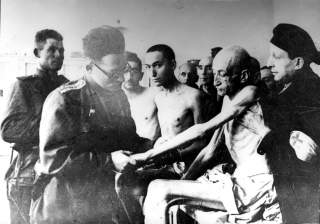 Monday is International Holocaust Remembrance Day. World dignitaries will gather together in Israel to mark the coinciding seventy-fifth anniversary of the liberation of the Auschwitz death camp. As personal tragedy often brings people together, driving out the petty with the profound, so the memory of historic tragedy can do the same if we are determined to use it for good.

We must, therefore, renew our determination to educate all young people about the Nazi genocide of six million Jews, and of the murder of so many others amid a human catastrophe that took more than fifteen million lives in Europe alone between 1939 and 1945. We must do this because the memories and the lessons attached to those memories are fading.

Alas, the intricate texture of historical memory inevitably decays with the passage of time. What people see with their own eyes, and process with their own hearts, cannot possibly be as emotionally resonant to those who must learn about such events from after-the-fact testimonials. This is why we make extra efforts to preserve the memory of those events, like the Holocaust, that bear critical lessons—for memory is the only tool we have to capture time.

It is not enough, however, to remember the Holocaust. We must remember it with special nuance because its lessons are not all obvious.

The Holocaust was something genuinely new in the annals of human evil. It represented the pairing of the methodology of the industrial revolution to the dark tradition of mass murder. It showed how technologized propaganda methods dehumanized other people so as to make actual acts of industrialized mass murder possible.

Remembering the Holocaust teaches us not only about evil but about the conditions that enable evil motives to seed evil deeds. At a time when the world is rushing madly ahead on a new wave of unprecedented technological change, we dare not lose the lessons that show us how to connect means and ends, motives and deeds.

The passage of time is not the only obstacle to memory. All historical memory is embedded in specific social contexts. Sometimes, too, historical memory is instrumentalized to serve the interests of the present. Jews do not remember the Holocaust the same way Germans do, or Poles or Russians or French. And what of the Arabs?

The Arabs are a special case. How can Arabs remember usefully an event that many were never taught the truth about to begin with?

For decades, millions of Arabs have lived under autocracies that have manipulated history to serve their appetites for power, and to hide the fact that their anti-colonialist nationalisms had once made many of them the fans of German war efforts. Many Arab historians have colluded in the falsification of Holocaust history—minimizing or outright denying it—out of fear of social ostracism or punishment at the hands of authorities. The result is that entire chapters of history are missing from the programs that Arab governments teach their students.

Into the vacuum have poured the diatribes of religious extremists, spread in recent years through certain satellite television channels that are often protected if not supported by governments, that distort history as they spread hatred. In these diatribes, Palestinians and other Arabs are the only victims of history, as Jews and Israelis are predictably turned into Nazis. Young Arabs are told that the Nakba of 1947–48 was a wholly one-sided crime, while twisted lessons on the Holocaust depict the Jews as having been responsible for their own much-exaggerated difficulties.

In most of the world the Holocaust is fading from memory with the passage of time; but, in much of the Arab world, falsified memories of the Holocaust are, if anything, spreading. This is disastrous. Distortion of Holocaust history is being pressed into the service of a destructive and counterproductive political nihilism. It is nurturing a grievance culture that yields only self-loathing and paralysis. And it is separating the image of Arabs from that of all other civilized peoples, making them into an international embarrassment.

Arab youth must be taught the truth about the Holocaust, for its lessons are universal. Some of those lessons apply acutely to Arabs and Muslims right now because many Muslims are no safer today from bigotry and violence than were European Jews in 1939. Not to teach them about human-rights violations during World War II undermines their capacity to fully grasp the Rohingya tragedy, the building of concentration camps for Uighurs in Xinjiang, and the meaning of new anti-Muslim immigration restrictions in India.

The Holocaust can also teach today’s Arab youth how to deal with fanaticism, through the stories of brave individuals in Nazi-occupied Europe who resisted the power of the crowd and risked their lives to save their Jewish neighbors. There is much to learn from examining the motivations and behavior of the perpetrators and collaborators, as well as passers-by, protesters, and heroes.

Learning real history, even of great tragedies, also shows that reconciliation, justice, and peace really are possible. No people have atoned more sincerely than the German people, who have sought persistently and sincerely to reconcile with their European neighbors and who acknowledge a special bond with—and responsibility toward—Israel. Knowing this bears a truly precious lesson: Peace is achievable between Israel and the Arabs.

I am fortunate to be a Moroccan. Distortions of history thrive when counterevidence is unavailable, but the well-known history of Jewish-Muslim relations in Morocco over many centuries immunizes nearly all Moroccans against the sirens of calumny, hatred, and fanaticism. All of us know how King Mohammed V worked to protect Moroccan Jews during the war, and how he resisted de facto calls for the boycott and isolation of Israel after 1948. We know that King Mohammed VI recently visited the newly opened house of Moroccan-Jewish heritage Essaouira, and years ago resolved to raise awareness of the Holocaust in Morocco, both through his own historic statement and through a range of cultural and educational interventions.

On this anniversary, more Arabs must join in the cause of sharing the hard-won lessons of the Holocaust. These lessons belong to the world, and one of those lessons, stated as a question, stands out above all others: If we cannot empathize with the pain of other human beings, how much less human and less deserving of human kindness does that make us?