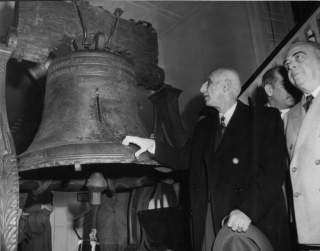 Reviewing Oliver Stone’s controversial film JFK in 1991, the late critic Roger Ebert stated that Stone’s film “is not a documentary, not a historical study and not a courtroom presentation, but a movie that weaves a myth around the Kennedy assassination—a myth in which the slain leader was the victim of a monstrous conspiracy.” Ebert wrote that polls of the general public and even many of Stone’s detractors showed doubts around “the official establishment myth.” “Is it such a terrible thing Stone has done,” asked Ebert, “to weave a countermyth?”

Public knowledge, in this view, rarely approaches reality enough to be called “true” or “false.” Oversimplifications and pious frauds are inevitable. Facts are secondary to narratives. Ebert may have been on to something. Consider the case of the long, troubled history of relations between the United States and Iran. Ask a reasonably informed American—someone who watches the nightly news, say—about where things went wrong, and you’ll get one of two stories. The first, the more popular one, starts in late 1979. Radical students, chanting “Death to America!” storm the U.S. embassy in Tehran and take dozens of diplomats hostage in the name of a bearded, black-turbaned extremist named Khomeini. The hostages are eventually released, but Iran remains under the rule of a band of terror-sponsoring religious fanatics to this day. America, in this view, is an innocent victim of Iran’s irrational and baseless hatreds.

The second story—the countermyth—starts in 1953. Acting in the service of international oil interests, American agents overthrow the democratically elected, reform-minded Iranian prime minister Mohammad Mossadegh, replacing him with Iran’s monarch—the Shah, Mohammad Reza Pahlavi. This constitutes a radical turning point in Iranian history, as the Shah sets up a fascist dictatorship, fills his prisons with dissidents, and lives in outrageous opulence while his people starve. Having crushed democratic opposition, the Shah’s only remaining challengers are religious factions, led by the same Khomeini. Khomeini’s followers bring down the Shah and form the Islamic Republic—which America then relentlessly opposes for the following decades. America’s sin in 1953, in this view, is the root of all evils in Iran. Washington gets what it deserves, or at least what it should have expected; repentance is the only way out. Conciliatory policies toward today’s Iran must be our penance.

The countermyth has been gaining currency in certain relatively elite circles. Given the harsh remedies it prescribes, it should be no surprise that it has spun off counter-countermyths. A recent column by Josh Gelernter for National Review is an excellent example. Gelernter rightly demolishes much of the Mossadegh mythology. Mossadegh was not democratically elected, but a beneficiary of a suspended election; his reform policies were radical; his confrontation with Britain was a disaster, and the United Kingdom had a right to be outraged by his nationalization of the Anglo-Iranian Oil Company. (Gelernter could have gone further, too—for an alleged budding autocrat, Mossadegh was fatally ineffective at gathering the reins of the state to himself when the Shah fled; he also had a penchant for histrionics, often confining himself to bed or threatening to resign when things weren’t going his way.) Mossadegh was a flawed hero—as much a melodramatic populist as a bearer of democratic awakening.

Gelernter also shows that the Shah was not a cartoon villain, particularly when compared to the Islamic Republic that followed. His prisons were far less deadly. His revenge on Mossadegh was minimal. He presided over large reforms of his own, and Iran’s economy grew like gangbusters during much of his rule. He had some diplomatic successes and was a fairly good friend to the United States, one whose strength enabled a Vietnam-singed nation to focus its energies more efficiently.

Yet Gelernter’s column, like its target, isn’t perfect. Most egregiously, he repeatedly refers to the Shah, Mohammad Reza Pahlavi, as “Reza Pahlavi.” Reza Pahlavi is, in fact, the Shah’s son, born seven years after Mossadegh was deposed. Yet the broader problem is not that Gelernter renders the facts incorrectly, but that he renders them selectively. Iran had legitimate grievances, for example, with the Anglo-Iranian Oil Company. As Christopher de Bellaigue wrote in his evenhanded 2012 biography of Mossadegh, Patriot of Persia, “Under the concession agreement, [Anglo-Iranian] was bound to provide housing, healthcare and other amenities for its Iranian workers, but in 1949 some five-sixths of them (more than 40,000 men) had no official housing of any sort, and many lived in hovels.” Anglo-Iranian “was training only about half the number of Iranians” that it had agreed to train, and its British employees arrogated to themselves the privileges of a colonial elite: “The Britons were ‘sahibs’ and their wives ‘memsahibs.’ Back in England they were nice middle-class people. Out here, under the blazing sun, they were kings.” All this led to widespread tension, to which AIOC’s usual response was to “redouble its propaganda efforts.” “The biggest obstacle to Anglo-Iranian’s success in its endeavours, and as a consequence the biggest factor in its unpopularity,” concludes de Bellaigue, “was Anglo-Iranian itself.”

Mossadegh, too, gets shorter shrift than he deserves. Despite his many flaws, he was the most vigorous heir to Iran’s constitutional tradition; the Majles he sought to empower was Iran’s best hope for the institutional continuity, independence, and participation that democracy requires. His own principles—chiefly his belief in the law and in independence from foreign powers—made him a check against the political culture of expediency in which arbitrary power thrives. He was also honest, refusing many of the luxuries and indulgences that accompanied political office—and expecting the same probity from those who drew from the public purse. Constitutional, non-extortionate politics requires armies of men like this, but Mossadegh often found himself alone in the corridors of power. Combine that with his strong personality and his significant popular support, and it is not hard to see how the flaws in Mossadegh’s politics—the demagoguery, the threats of resignation, the obsession with principles, and his final struggles with the Shah and rivals in the Majles—would result. It would be naive to say that Mossadegh would have brought Iran to functioning democracy had he not been overthrown. But the notion that he was taking Iran in a direction that was ultimately positive is not incredible.

Gelernter also goes too easy on the Shah. Mohammad Reza Pahlavi may not have been as brutal as Khomeini’s men, he may have declined to take vengeance on Mossadegh, and he may have presided over years of growth and reform. Had he kept his throne for another dozen years, Iran may have benefited from the great wave of peaceful democratization that swept over the world as Communism faded. But his loss of power was not “because the United States refused to defend progress from Islamism,” as Gelernter charges, but because of his own misrule. He’d blown the nation’s oil windfall on weapons systems that his military could not use and did not need—for example, what good would the advanced blue-water navy he was building in Iran’s south have done against a Soviet ground attack into Iran’s north? He also presided over the transformation of Iran into a one-party state. (That broke promises of political pluralism he’d made in a book written a decade earlier; his agents duly removed the book from libraries and stores.) He left Iran’s constitutional tradition in shambles, turning many relative liberals against him. And those grand reforms he presided over? They helped accelerate the social dislocation and religious dissent that ultimately led to the revolution. Ruhollah Khomeini himself rose to fame as an opponent of the reforms. (It’s disappointing that a writer for a conservative publication like National Review wouldn’t be attuned to the possibility that grand reforms backed by arbitrary power in the service of a progressive vision might produce some unintended consequences. It’s safe to say that had Vox been around in the early Sixties, they’d have been big fans of Mohammad Reza Pahlavi.)

Yet the Shah’s greatest flaw was simple: he was willing to exercise power like a dictator, yet unwilling to defend his power like one. He provoked a revolution he lacked the guts to crush.

The Shah’s many errors bring us to the root problem in the American discussion of Mossadegh, whether myth or countermyth: there is no straight line from Mossadegh’s fall to the rise of the Islamic Republic. A quarter of a century stands between those two events, and that period saw earth-shaking changes in Iran’s economy and society that had no connection to Mossadegh’s rule. At the political level, the Shah changed tack many times, too. The current regime does not trace its roots to Mossadegh and downplays his legacy. His tomb remains where it was under the Shah, tucked behind the doors of his home outside Tehran. The coup of August 1953 tells us very little about Iran today or about how America should approach it.

When we talk about Mossadegh, we’re usually talking about ourselves. Mossadegh and the coup become a kind of parable. In the leftist telling, it’s a parable of American guilt and selfishness. In the noninterventionist telling, it’s about the unintended consequences of intervention. And in rightist tellings like Gelernter’s, it’s about American innocence, and about defending America’s legacy from leftist calumnies. Understanding Mossadegh is not the point for any of the mythmakers. Iran’s story becomes an American story.