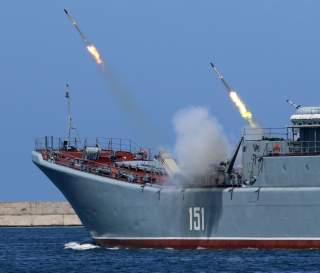 The Russian and Chinese navies have become increasingly active in the North Atlantic over the last five years, necessitating a return to a “competitive mindset” among U.S. Navy commanders, Chief of Naval Operations Adm. John Richardson said Monday.

“We’re talking about more [activity] than we’ve seen in 25 years,” Richardson said of Russian naval movements in the North Atlantic in an interview with Voice of America, adding that the Chinese Navy “is certainly a pacing competition for us in terms of the naval threat.”

Vice Adm. Charles A. Richard, the new head of U.S. Submarine Forces and Allied Submarine Command, put it more bluntly when he assumed command on August 3: “Prepare for battle!”

“This was Admiral Tofalo’s direction, and it is mine as well,” said Richard, referring to his predecessor, Vice Adm. Joseph E. Tofalo. “It is only by being prepared for battle that we can hope to avoid it. If we cannot, our nation expects and demands victory. We shall not fail!”

The admirals’ warnings reflect threats described in the 2018 National Defense Strategy, which calls upon the U.S. military to make “great power” competition with nations like Russia and China its primary focus rather than combating terrorism.

In May, the Navy announced the reactivation of the 2nd Fleet to oversee naval operations along the East Coast of the United States and across the Northern Atlantic to counter the growing threat of Moscow’s territorial ambitions pose to NATO allies.

The Navy says tackling this threat requires a shift in mentality across the force.

“Our Navy leaders are clearly communicating the need for every Sailor to take a more competitive mindset,” the Navy told Task & Purpose. “In order to maintain America’s maritime superiority, it’s imperative that we’re laser-focused on increasing our warfighting lethality and readiness not only within our Navy, but also with our joint sister services and our allies and partners.”

Despite the broad threat of Chinese subs operating in the North Atlantic, it’s the bellicose Russian military that the Navy is particularly worried about. In 2016, Adm. James Foggo III described tensions between Russia and the U.S. as the “fourth battle of the Atlantic” after the surface and sub encounters that marked World War I, World War II, and the Cold War.

“Once again, an effective, skilled, and technologically advanced Russian submarine force is challenging us,” Foggo said. “Russian submarines are prowling the Atlantic, testing our defenses, confronting our command of the seas, and preparing the complex underwater battlespace to give them an edge in any future conflict.”

‘Complex underwater battlespace’ is an understatement. In his VOA interview, Richardson noted that Americans sailors are increasingly dealing with advanced jamming equipment. “This is an emerging part of our business now,” he said. “Those disruptive technologies…are really going to be decisive in the future fight, and we’ve got to make sure that we’re investing in those as well.”

And that’s not to downplay the rising threat of the China’s People’s Liberation Army Navy, which has rapidly expanded its submarine fleet over the last decade and expects to boast 70 subs by 2020, according to the Department of Defense.

There is, however, at least one Pentagon official who doesn’t seem phased by all the recent commotion in the Atlantic . When asked about Richardson’s VOA interview on Tuesday, Secretary of Defense James Mattis brushed off the question.

“We watch all submarine activity,” he said. “[I’m] not concerned about it.”