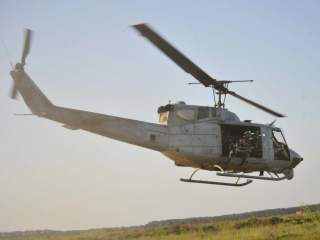 The Minuteman missiles are a big deal. So why is missile-field security the responsibility of some of the oldest, slowest helicopters in the entire Defense Department inventory?

The network of silos housing the Minutemen stretches over a 33,600 square-mile spanning five states in the northern Great Plains region.

Spreading the silos over a large area made great sense during the Cold War because that made it nearly impossible for the Soviet Union to take out all of the silos in one massive attack.

The downside is that protecting individual sites from sabotage poses huge logistical problems. You need helicopters to speed teams long distances from silo to silo. Ideally, the copters would be fast, reliable and capable of lifting heavily-armed security teams and all their equipment over long distances.

The Air Force’s sixty-two Hueys, operated by the 582nd Helicopter Group at F.E. Warren Air Force Base in Wyoming, have been in service since 1970, around the same time that the Army began retiring its own UH-1s in favor of more modern UH-60 Blackhawks.

A Blackhawk cruises at 151 knots, compared to the Huey’s cruising speed of just 121 knots. A UH-60 can usually fly at least 276 miles with a combat load, while the Huey runs out of fuel at 172 miles.

Since at least 2004, the Air Force has been asking for funding to replace the Hueys—without much luck. Part of the problem may be the flying branch’s own preference for fixed-wing planes. Another issue is that the Air Force tried to combine the Huey replacement initiative with other, large Defense Department helicopter programs that all ended up getting cancelled.

Time drags on and the four-decade-old UH-1s soldier on, demonstrating worse and worse results in exercises. In mid-2015, the 20th Air Force—the headquarters that “owns” the ballistic missiles and the Hueys—organized a silo-security war game called Mighty Guardian.

The Hueys performed abysmally. Rep. Ryan Zinke, a Montana Republican and former Navy SEAL, said the Hueys lacked the range to reach some of the more distant silos in time to respond to an attack. If they did make it that far, they weren’t able to stay at the destination for very long. The UH-1s are also limited when operating at night or during inclement weather, which is common in the region.

“Every time they use the Hueys, they fail,” Zinke said.

To be fair, nobody expected the UH-1s to even last this long. The Air Force’s UH-1Ns were built in 1969 with a planned service life of 4,000 flight hours. Most of the helicopters flown by the 37th Helicopter Squadron, a missile-security unit, have logged more than 16,000 flight hours.

The Huey owes it durability to its mechanical rather than computerized design, said Ben Postma, an aircraft mechanic with M1 Support Services, which maintains the 20th Air Force’s Hueys. The mechanical design makes repairs easier to identify and address and reduces time spent “chasing” computer errors.

“It is, for the most part, cost-effective for flight hours versus maintenance hours, and that’s one of those things you can’t beat,” Postma said. But it’s no use being mechanically reliable if you can’t fly far or fast enough to do the job.

One goal of activating the 582nd was to allow its Huey crews to report to leaders who understand the equipment they were dealing with. The change was also intended to help improve effectiveness and streamline operations for the helicopter squadrons by placing them under one chain of command.

But the missile security forces still need new aircraft. The process of finally replacing the Hueys could begin this year, but would start with a modest outlay of just $2.5 million to establish an office for the replacement program. Additional funding to actually purchase new equipment—possibly UH-60s—would be part of a five-year spending plan: $52 million for the 2017 fiscal year, $127.5 million in 2018, $127.4 million in 2019 and $127.1 million in 2020, with “future costs to be determined,” according to Air Force Times.

No doubt a lot of Air Force officials have their fingers crossed.

Darien Cavanaugh is a contributor to War is Boring, where this article first appeared.