Obama, the Senkaku/Diaoyu Islands, and the US-Japan Security Treaty 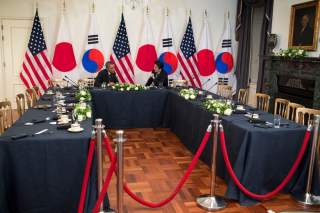 The main talking point of President Barack Obama's visit to Japan on April 23-24 has been his declaration that the Senkaku/Diaoyu Islands are subject to Article 5 of the Japan-US Security Treaty. Article 5 of the treaty declares the two states would act against an attack on "territories under the administration of Japan."  This is an important development in US-Japan security relations, as Obama became the first sitting US president to make this coverage explicit and perhaps even challenge the traditional US position of not taking sides in territorial disputes.

Why was Obama willing to make this bold statement? This question is important as the Sino-Japanese relationship is probably at its lowest point in recent history and the statement risks antagonizing China and destabilizing US-China relations that have been on an even keel since the Obama-Xi California Summit in June 2013.

The statement by Obama was a calculation that attempted to gain leverage in bilateral issues involving Japan and restore stability in the East China Sea by eradicating ambiguity regarding the US role in support of Japan in the event of a conflict on the East China Sea.

Obama's statement was exactly what the Japanese leadership has been wishing for since the escalation of tensions in the East China Sea that began in September 2010. For Japan, the strengthening of the US-Japan security alliance is a critical factor in dealing with tensions related to the Senkaku/Diaoyu Islands, along with expanding its defensive capabilities. Though this process started under former Prime Minister Noda Yoshihiko, efforts to strengthen the alliance saw a significant boost when Prime Minister Shinzo Abe came to power. Abe has taken bold steps to seek resolution of outstanding bilateral issues, such as the relocation of the Marine Corp. Futenma Air Base, started a national debate on revising restrictions on the exercise of the right of collective self-defence so that Japan's Self-Defense Force could assist the US in regional contingencies even when Japan's national security is not challenged, and announced Japan's participation in the Trans-Pacific Partnership (TPP) negotiations. Obama statement could be seen as a reward for these significant advancements.

At the same time, he also sought Japanese concessions on two issues. The first concerns Japan's hardened approach to the history issue. The US expressed disappointment when Abe visited Yasukuni Shrine in December 2013. This explicit expression of opposition surprised many in the Japanese leadership. Obama's clear statement regarding Article 5's application to the Senkaku/Diaoyu Islands could be a way for the US to seek a compromise with the Abe government by encouraging them to not raise tensions caused by unresolved history issues. The serious deterioration of Japan-South Korea relations due to the history issue is a serious concern for the US. As "quasi-allies," both states play critical roles alongside the US in ensuring regional stability. To encourage dialogue, Obama initiated a trilateral summit with Prime Minister Abe and President Park Geun-hye at The Hague in March 2014.

Second, the statement also aimed to extract a compromise from Japan to overcome the stalemate in the TPP negotiations. Japan and the US have not reached agreement in the negotiations. Tokyo hasn't agreed to lower tariffs to levels acceptable to the US on two products - beef and pork. According to reports, some headway was made, but no resolution was achieved by the end of Obama's trip to Japan. Significantly, the US has strengthened its leverage in the negotiation process following Obama's announcement.

This statement also contributes to stability in the region even though China has expressed opposition to it. It promotes stability by removing the ambiguity in the US position regarding what it will do in the event of a conflict in the East China Sea. To be sure, Obama's statement was a reaffirmation of statements already made by his two secretaries of State, Hillary Clinton and John Kerry, and secretaries of Defence, Leon Panetta and Chuck Hagel. Even though it does not imply a shift in US policy toward Japan, Obama's endorsement removes any ambiguity in this policy.

This statement also contributes to stability as it removed lingering doubts that were prevalent in Japan about the US commitment to Japan and Asia, and its ability to realize the rebalancing strategy toward Asia. The US preoccupation with the Middle East and seeming weakness revealed when dealing with the Syrian and Crimean crises raised questions related to the US role as a security guarantor. Obama's statement makes explicit three points critical to Japanese defense planners: it reaffirms the US commitment to Japan, underscores that Japan continues to be the primary ally of the US in the region, and sends a strong signal that the US is serious about rebalancing to Asia. This applies to other US allies as well. The bold statement about US commitment and will to fulfil its treaty obligations was a much needed message.

Bhubhindar Singh is Associate Professor and Coordinator of the Multilateralism and Regionalism Programme at the S. Rajaratnam School of International Studies, Singapore. The following piece was first published by CSIS: PACNET here.