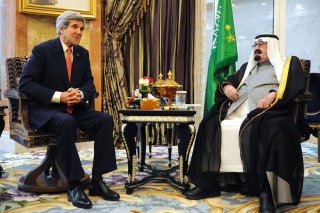 A leader does not have to be a truly great person to play a historically significant role if placed in a situation that is sufficiently fragile and weird to force such importance on the individual in charge. King Abdullah bin Abdul Aziz, who died overnight at age 90, was in such a situation by being in charge in Saudi Arabia, a family-run kingdom that is both weird and fragile—an anachronism in the twenty-first century. Although the Saudi monarchy is still almost absolute, the individual king is not, since he has to contend with factionalism and ambitions within the royal family. But the family politics are just another of the complications that pose a challenge to the man at the top who has to hold the whole thing together, baling wire and all. Abdullah occupied that role for 20 years, the first ten as crown prince and de facto regent when the disabled King Fahd was still alive, and the last ten as king himself. During this time he personally affected many things of importance to the Middle East and to U.S. interests there.

The people of Saudi Arabia are probably better off for having had Abdullah as king than would have been their lot with most other rulers. He recognized the need for the country's society to modernize and moved in that direction about as much as he could within the severe limits posed by tradition, the religious establishment, and the necessity for consensus. This was particularly true regarding the role of women, however painfully slow progress in this area has been by the standards of those of us in the West who do not have to deal with those same limits. Probably the clearest manifestations of Abdullah's intentions in this regard are to be found at the mixed-gender university for science and technology that bears his name.

Abdullah governed in ways that were generally congenial to U.S. interests. This was in large part due not to any particular initiative or insight by the leader but rather because of natural convergence of some Saudi and U.S. interests. This has been true regarding oil prices insofar as a lower price is on balance good for the U.S. economy and Saudi Arabia, with its large oil reserves, does not want prices high enough to accelerate the move to alternative fuels. It was during Abdullah's rule that the kingdom stopped trying to export its extremist problem and instead began dealing with it seriously and directly, and that change clearly was in U.S. interests. The change, however, owed less to conspicuously inspired leadership than to the hard knocks of terrorist attacks within the kingdom.

The feature of Saudi foreign policy that probably did owe the most to initiative by Abdullah was his proposal for linking resolution of the Israeli-Palestinian conflict to full recognition of, and making of peace with, Israel by all the Arab states. He persuaded those other Arab states of the wisdom of this concept, and the concept is known today as the Arab League peace plan. It is still out there—and reaffirmed just the other day by the Arab League—ready to be taken up by anyone who genuinely wants peace between Israel and all its Arab neighbors.

Saudi Arabia has a system of political succession that by its very nature cannot continue indefinitely. The kingdom's founder, King Abdul Aziz, made it thus when he determined that he should be succeeded by his many sons, one after the other, rather than using the usual vertical monarchical succession based on primogeniture. The succession has not reached the end of that line of brothers and half-brothers yet, but with Abdullah's passing it is getting closer. The succession to the throne of 79-year-old Prince Salman is not reassuring; Salman already has shown signs of losing his faculties.

Abdullah did make a move a couple of years ago that lessens the political uncertainty; he effectively designated as next in the succession after Salman the 69-year-old Prince Muqrin, the youngest surviving son of Abdul Aziz. Muqrin,who now is the crown prince, seems to have a fair amount on the ball. If he becomes the principal decision-maker, with or without Salman alive, during the next few years that probably would be good for the kingdom.

Things in Saudi Arabia, still a strange place, could have been much worse than they have been under King Abdullah.