Additional Weirdness in Opposition to the Iran Nuclear Agreement 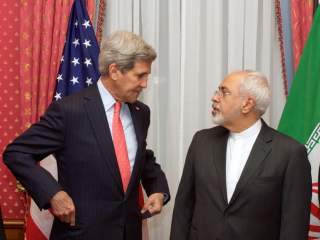 The never-say-die efforts to kill the Iranian nuclear agreement have been taking some strange turns lately. Two in particular.

One is that some of the same opponents who, before the agreement was adopted, spent much energy berating the terms of the agreement are now focusing instead on criticizing certain actions by the U.S. administration toward Iran that the opponents assert are not among the terms of the agreement, and that the opponents say should not be taken for that very reason. The assertions are incorrect. The issues at hand mostly concern the stickiness of the U.S. sanctions system and the persistence of fears among European banks and others about doing any business with Iran—even business that is permitted under the sanctions relief granted as part of the nuclear agreement. Efforts by U.S. officials to undo some of the stickiness are not beyond the obligations of the agreement; they are a necessary part of implementing terms that are an intrinsic and fundamental aspect of the bargain incorporated in the agreement. Another, lesser, issue that has received comment concerns U.S. purchase of some of the heavy water that, under the agreement, Iran must remove from its stockpiles. Any such purchase is a direct facilitation of the carrying out by Iran of obligations that lessen its nuclear capabilities.

The opponents cannot have it both ways: first saying the terms were terrible and then saying what's terrible is not to adhere strictly to the terms—or rather, to the opponents' newest interpretation of the terms. If the agreement really says what the opponents now say it says, they should have been delighted with the document that emerged from the negotiations—one that, according to their interpretation, would have imposed all of the same limitations and scrutiny on Iran's nuclear program that the actual accord does, but with almost no economic benefit accruing to Iran and even with the Iranians incurring additional economic loss in the form of expensively produced heavy water being poured down the sewer.

Another strange turn has come within the last week in the form of attention to a profile of presidential aide Ben Rhodes written by David Samuels and appearing in the New York Times Sunday magazine. If this piece was written to be exploitable by opponents of the nuclear agreement, that is not surprising given that the writer is a confirmed opponent himself. The picture that Samuels conveys is of Rhodes as a master manipulator of public perceptions who got the press that was covering the Iran negotiations to eat out of his hand in a way that conveyed false impressions of what the White House was up to. Now, whatever one may think of Ben Rhodes, and even if one were to believe that the press covering U.S. foreign relations and security policy were as dumb and dependent as portrayed, there is no there there. There were no impressions, manipulated or otherwise, that ought to cause anyone any heartburn.

One of the supposed instances of manipulated and false impressions is that the administration contended it didn't do anything on this issue until after Hassan Rouhani was elected president of Iran in September 2013 despite there having been some earlier secret U.S.-Iranian talks. In fact, the earlier talks have been well known for some time and had been reported long ago by that supposedly gullible press. Moreover, it would have been surprising, and disappointing to anyone who would like the makers of U.S. foreign policy to be diligently looking ahead and considering all possibilities for advancing U.S. interests, if the administration had not tried to reconnoiter what the possibilities were for negotiating restrictions on the Iranian nuclear program. And Rouhani's election did make a significant difference, both in bringing into office on the Iranian side a team with the knowledge and commitment to reach such an agreement, and in rendering irrelevant on the American side the political difficulty of any major dealings with the loathsome Mahmoud Ahmadinejad. So where's the deception, and what's the problem?

The Samuels piece also suggests that the manipulator Rhodes got people to believe that the administration's main purpose in negotiating the agreement was nuclear proliferation but that it really had other objectives in mind having to do with broader Middle Eastern matters. But the Obama administration wasn't the one going out of its way to talk up an Iranian nuclear threat, even though other administrations have been known to talk up such threats to pursue other agendas. This time there was plenty of agitation from other sources about the danger of an Iranian nuke. The agreement certainly needs to be assessed, pro or con, primarily in terms of nuclear nonproliferation, and it is in such terms that nonproliferation specialists have overwhelmingly endorsed the agreement. The agreement also needs to be assessed, pro or con, in terms of other effects it may have on regional politics and stability. And it was so assessed in the public debate; certainly the con side addressed it especially vigorously in such terms—you know, all that talk we heard about how Iran supposedly would be “emboldened” to do all sorts of “nefarious” things in the region. So where's the deception, and how did it affect in any way the debate on the agreement?

The suggestion of duplicity with Ben Rhodes pulling strings from his West Wing office reminds one of those teasers for the eleven o'clock news that are phrased as a question: “Is there...[some shocking development, if it existed]?” only to find out, if one stays up and tunes in to the news broadcast, that the answer is: no, there isn't.

Each of these strange turns in the tactics of the would-be agreement-killers is an additional example of what we saw so much of when debate on the agreement was most intensive last year: a grasping by the opposition for any straw to raise any kind of doubt about the agreement, however little sense the arguments made.