Aid to Syrian Rebels: How Does It End? 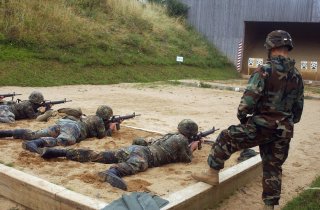 The Obama administration's proposal to spend $500 million on training and equipping “appropriately vetted elements of the moderate Syrian armed opposition” leaves unanswered some of the same questions that always have surrounded proposals to give lethal aid to Syrian rebels. Some of those questions involve the challenges in determining who qualifies as a “moderate.” “Vetting” sounds so much easier to do than it actually is to do. It is very difficult to do with anything that is even half as jumbled, confused, and extremist-ridden as is the current armed opposition to the Syrian regime. It is interesting how many of those in Washington who are quick to lambaste the national security bureaucracy for supposedly being unable to perceive and predict accurately who is doing what in the Middle East seem to have ample confidence in the ability of that same bureaucracy to “vet” Syrian rebels.

“Moderate” presumably refers to long-term political objectives rather than to current methods, given that anyone who is engaging in armed rebellion is by definition using non-moderate methods. The principal difficulty in identifying those political objectives stems not from faulty information or analysis today but rather from the impossibility of predicting the directions that groups or leaders, facing changed circumstances, will take in the future. History is replete with examples of leaders whose trajectories once in power could not have been extrapolated from what they did or said while they were still rebels.

Another complication is that fighters and the arms they carry have a way of moving from group to group. There already has been some of this movement in the Syrian civil war.

One hears the argument that the presence of many nasty and immoderate people in the Syrian opposition is all the more reason to aid moderate groups, so that fighters will gravitate toward the moderate groups rather than the extreme ones. But if allegiance and political inclination can be transferred or bought this easily, this calls into question the validity of any “vetting.”

The most fundamental question about any aid to Syrian rebels is exactly how this type of support advances whatever is our own political objective for Syria, or at least makes more likely an outcome of the war that is more rather than less consistent with U.S. interests. The White House statement about the aid proposal says the assistance is intended to “help defend the Syrian people, stabilize areas under opposition control, facilitate the provision of essential services, counter terrorist threats, and promote conditions for a negotiated settlement.” That sounds reasonable enough, although the nature of the objective concerning a negotiated settlement is unclear given that we never appear to have rescinded explicitly the previously stated objective that Assad must go.

Perhaps some aid to the rebellion would shift the momentum on the battlefield enough for some figures in the regime's camp to support a negotiated settlement more than they do now. If that is to happen, however, rather than aid to rebels being just one step in a new spiral of escalation, a more complete pro-negotiation strategy will have to become apparent, with everything that entails particularly for the roles of Russia and Iran.

We also should be wary of a dynamic we observed with some of our client groups in Afghanistan. When a group realizes that it is being aided only because of its role in an ongoing war, it has an incentive to keep the war ongoing. And that means it is more likely to oppose negotiations, at least under any terms that are reasonable and feasible, than to support them.

Meanwhile, we have the irony of the Syrian regime of Bashar Assad reportedly conducting air strikes against positions of the hated ISIS group in Iraq. The Iraqi prime minister says he didn't ask for the strikes but welcomes them. Some of the same Washington hawks who have been most gung-ho about toppling Assad have also been gung-ho about doing what Assad's own forces are doing in Western Iraq. You can't tell the players in the Middle East without a scorecard. Or rather, the line-ups are so confused even with a scorecard that we need to think again about trying to play whatever is the game that's going on.

It is unclear how much of what the Obama administration has been doing lately in Iraq and Syria, including this proposal to give lethal aid to Syrian rebels, it would have done without the political pressure from critics to “do something” in those countries. Both the administration and its critics need to keep end games and broad strategy in mind and continually to ask themselves—as well as making more clear for the rest of us—how any move today will make more probable a desired end state in either country.