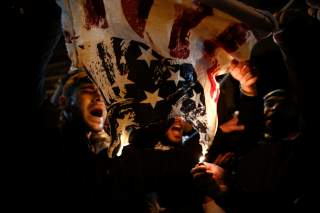 The congressionally mandated national security strategies have for the most part not merited the term “strategy”.  They are public documents meant for public consumption rather than as guides to decision-making about individual foreign policy problems.  They are essentially an additional opportunity, along with presidential speeches and other vehicles, for expressing to the public an administration’s favored themes.

This observation applies at least as much to Donald Trump's newly released national security strategy as to those of other administrations.  Although some of Trump’s senior subordinates are quite capable of thinking strategically, the president himself has given scant indication of having a strategic bone in his body when in comes to national security.   Trump’s utterances on the subject have shown evidence less of any deep thinking than of inconsistency, ignorance stemming from inexperience, and a demagogue’s concern with applause lines.

Moreover, a document published under the name of a president who has taken lying to a level far beyond that of most other politicians is, unsurprisingly, duplicitous as well.  The duplicity extends not just to individual mischaracterizations but to absconding of entire concepts—or more precisely, to the use of terms that refer to such concepts without making policy that conforms with them.  The administration’s document claims to be a “strategy of principled realism,” while the Trump foreign policy has not been realist at all, especially given its tendency to divide the world rigidly into friends and foes. The document also favorably refers to the realist concept of “balance of power,” but Trump’s foreign policy has been far different from one that would observe the principles and reap the benefits of a balance of power.

The administration’s document brazenly claims to be pursuing objectives that it instead is trashing.  It says that “diplomacy is indispensable to identify and implement solutions” and that “we must upgrade our diplomatic capabilities” at the same time that it is running the State Department into the ground and, on issue after issue, blowing off the department’s diplomatic mission.  The document declares that “the national debt, now over $20 trillion, presents a grave threat to America’s long-term prosperity and, by extension, our national security” as the president is about to sign, with celebration and no reluctance, one of the biggest deficit-ballooning pieces of legislation in recent history.

The over-arching theme of the strategy document is the now-familiar slogan of “America first”.  An outward-looking sub-theme involves American leadership abroad.  White House economic adviser Gary Cohn and national security adviser H.R. McMaster, in a much-noticed op ed earlier this year, explained that “America First does not mean America alone.”  But in its first eleven months, the Trump administration has descended more quickly into self-generated isolation than has any other U.S. administration in memory.  Much of this descent stems from Trump’s insistence on doing the opposite of whatever his predecessor did. The United States is the sole country on the planet that disavows the Paris climate change agreement aimed at saving the planet—now that the last two other previous holdouts, the Assad regime in Syria and the Sandinista regime in Nicaragua, have signed on.  Trump’s withdrawal from the Trans-Pacific Partnership has left the other participants to proceed without the United States, as well as giving new opportunities for regional influence to China.  Trump’s efforts to undermine the Joint Comprehensive Plan of Action, a.k.a. the Iran nuclear agreement, which seven countries negotiated, have left the United States, not Iran, as the isolated party.  And just this week, Nikki Haley cast the first U.S. veto in six years at the United Nations Security Council, against an otherwise unanimously supported resolution opposing the Trump administration’s declaration about Jerusalem.

The Jerusalem move illustrates another of the Trump administration’s proclivities that run directly against the idea of “America first”.  This tendency is the subcontracting of policy to certain favored foreign regimes, rather than independently pursuing U.S. interests.  Bowing to the preferences of the right-wing government of Israel is the most glaring example, with the decision on Jerusalem going farther in this direction than even previous U.S. administrations had gone.  Not as far-reaching but just as obvious over the past year has been the bowing to preferences of the Saudi regime regarding rivalries and tensions in the Persian Gulf.

The strategy document, and much of Trump’s other rhetoric, suggest that “America first” also implies a need to attend to the strength of America at home, and so it should.  But again the chasm between rhetoric and policy is gaping.  The illustrations of this are numerous, but consider just some of what has been in the news the past several days.  The Republican tax bill heads the list.  It (along with ostensibly deficit-hawkish resistance to Barack Obama’s stimulus program when the United States was still struggling out of the Great Recession) stands sound fiscal policy on its head.  It rewards owners and inheritors over workers and strivers.  The heavy blow it delivers to the public finances will make more difficult, politically as well as economically, many ways of strengthening America to better enable it to advance its interests in a turbulent world, from improving the health of its citizens to rebuilding decrepit infrastructure.  Donald Trump talked a good game about infrastructure, but he has done little or nothing to make good on the talk and in the post-tax bill world is even less likely to make good on it.  One infrastructural deficiency—the unwillingness to pay for the installation of proven technology that prevents speeding by trains—allowed this week's fatal train crash in Washington state.

At least as important in defining a strong America as a competitor on the world stage is the strength and integrity of American democracy.  Here, too, the recent trend has not been good.  In addition to voter suppression laws and gerrymandering, the biggest additional issue since Trump’s rise has been Russian interference in U.S. elections.  Rather than leading, as any U.S. president should, a principled effort to uphold the integrity of representative democracy in the United States, Trump has tried to deny the whole problem.  With his kind of leadership, members of his party are trying to discredit and derail the one investigation with the best chance of getting to the bottom of it all.

Honest and open discourse and debate are essential to the healthy functioning of any democracy.  Trump’s constant dismissal of inconvenient truths and his raising of lies to the same level as any truth have been corrupting that discourse and debate all year long.  Here the relevant development of the past few days is another turn in the administration’s Orwellian attempts at thought control by banishing certain terms or concepts from any part of the discourse it can censor.  Its previous efforts expunged discussion of climate change—the most blatant big omission from the national security strategy document.  The latest censorship was the attempt to impose on the Centers for Disease Control a list of banned terms such as “evidence-based”.

As an example for the world, the America of Donald Trump is becoming less the shining city on a hill of Ronald Reagan’s (and John Winthrop’s) America and more an embarrassment.

Don’t expect to find real strategy in the latest national security strategy.  Do grieve at the discrepancy between favorable-sounding words in that document and the reality being wrought by the man whose name appears on it.

Image: People burn a t-shirt depicting an American flag during a protest against Donald Trump's decision to recognise Jerusalem as the capital of Israel, outside the U.S. Embassy in Athens, Greece, December 8, 2017. REUTERS/Costas Baltas