Is America Stuck With Its Dysfunctional Party System? 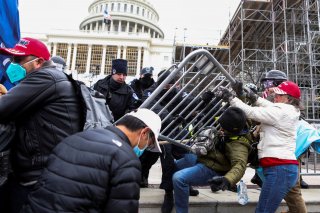 The past four years have repeatedly seen normalization of the abnormal. Outrages from Donald Trump have slipped from public attention when they have been eclipsed by something Trump says or does that seems even more outrageous. The most troubling example of this has come in the closing weeks of Trump’s term. The nation has been badly shaken, and rightly so, by what happened at the Capitol on Jan. 6. But that mob action was a violent symptom, not the underlying disease.

Conservative columnist Jonah Goldberg has it right when he observes that even if the crowd on the Mall had been peaceful and “simply went on a nice little march around the Capitol and did nothing else, it still would have been outrageous because what Donald Trump was trying to do was put pressure on Mike Pence and the Senate Republicans to, in effect, steal an election illegitimately and unconstitutionally.”

Respecting the results of free and fair elections, with acceptance of defeats and support for smooth transfers of power, is at least as fundamental as any other principle of representative democracy. Thus the biggest of all Donald Trump’s outrages has been his rejection of this principle and attempt to cling to power by any available means, however illegal and illegitimate. He has based this attempt on a big lie—which he still has not given up—that widespread election fraud denied him victory.

A more appropriate impeachment resolution than the one the House of Representatives passed would have focused sharply on this offense as Article One. Inciting a riot could have been relegated to an Article Two. The mob never would have assembled and the riot never would have occurred without Trump’s big lie and persistent attempt to overturn the election result.

Not Just Trump, but Trump’s Party

No expressed regrets about the assault on the Capitol or eleventh-hour resignations can hide the extent to which other members of Trump’s party have supported the big lie and the attempt to overturn the election. Most Republicans in the House of Representatives, including their floor leader, voted to reject the certification of electoral votes that formalized Joe Biden’s victory. They did so even after multiple counts, recounts, audits, and judicial dismissal of dozens of baseless lawsuits confirmed that the notion of widespread fraud was a lie and that, far beyond any reasonable doubt, Biden had won the presidential election fair and square.

Rejection of the election result persists among GOP members of Congress and also in large parts of the Republican Party outside Washington. Republican state attorneys general not only pushed the election fraud myth in a lawsuit but also, as an organization, promoted the rally on the Mall that became an insurrection at the Capitol.

Persistent promotion of the big lie about fraud has embedded it in the minds of many of the party faithful. A Washington Post-ABC News poll taken on Jan. 10–13 shows that nearly two-thirds of self-identified Republicans still believe there is “solid evidence” of widespread voter fraud in last year’s election.

In sum, a large part—by some measures, the largest part—of the Republican Party does not believe in representative democracy. Occasionally that posture gets expressed explicitly. More often the word “democracy” may be invoked without respecting the substance behind the word. As former Republican consultant Stuart Stevens notes, “A large portion of the Republican Party has decided they are for democracy if it means they win, and they're against it if it means they lose, which is to say you don't believe in democracy.”

This pattern predates Trump. It is reflected in a now substantial history of Republican attempts to retain power not just by winning votes but by suppressing them. The voter suppression efforts, like Trump’s lie about last year’s election, have been based on claims of fraud.

A representative democracy cannot endure if one of two major political parties doesn’t believe in democracy. To be a healthy polity, America needs a responsible conservative party. It does not now have one. It is radical, not conservative, to try to overturn the sort of free elections by which the nation has lived for two centuries and to grasp power through whatever irregular means are handy. It is a further rejection of conservative principles to use power at the center to run roughshod over the rights and duties of state governments, including duties involving electors and elections.

Split of a Party

Some current prescriptions, from Thomas Friedman and others, envision a fracturing of the Republican Party, with members who still believe in democracy and those who don’t going their separate ways under separate party labels. There is much to be said for the kind of multiparty system that might emerge in such a scenario. The irreconcilables might assume a place similar to parties such as Vox in Spain or the Alternative for Germany—not constructive contributors to public policy, but not a serious threat to the entire system and one that mainstream parties can work around.

The first-past-the-post electoral system used in most U.S. elections, however, works against any such transition and tends to entrench a two-party system. The result of the kind of split Friedman talks about might resemble what happened in Britain when prominent moderates in the Labour Party who opposed hard-left (and Euroskeptic) tendencies in the party split from it in 1981 to form a new Social Democratic Party. The Social Democrats never fully established themselves as an independent political force and later merged with the liberals to form the current Liberal Democratic Party. The Liberal Democrats still suffer from the first-past-the-post bias against third parties and currently hold only eleven seats in the 650-seat House of Commons.

Greater use of preferential voting, as already used in Maine and in some primary elections elsewhere in the United States, would give incipient third parties more of a chance and reduce the hyperpartisan bipolar division in American politics. Even better would be a combination of preferential voting and multi-member districts—the system that elects the Irish parliament and that John Stuart Mill recommended a century and a half ago. But given the stake that politicians who were elected under any given system have in perpetuating that system, prospects are dim for this major change in the structure of American elections.

Besides, even though a Congress elected through an Irish-type single transferable vote system would be less polarized, more moderate, and almost certainly more productive than the Congress the United States has now, that leaves the question of how any such electoral reform would apply to the separate election of a president without changes to the Constitution in how presidents are selected. If a new multi-party alignment repeatedly resulted in three- or four-way splits in the electoral vote and elections being thrown to a one-vote-per-state House of Representatives, that would be even worse than what the country has now.

Dissolution and Replacement of a Party

Hopes for rescuing American democracy are better placed not in a split of the Republican Party but instead in its dissolution, with its replacement having no direct lineage in terms of party labels and loyalties and thus having a better chance of escaping the stains of Trumpism and anti-democracy tendencies. Such a replacement of one-half of a two-party system, through the death of one of the existing parties, has occurred twice before in American history. The second time entailed the demise of the Whig Party in the 1850s due to irreconcilable differences over slavery—an overriding issue that has no current analogue.

The first time—involving the death of the Federalist Party some four decades earlier—is more relevant and instructive. The single biggest factor in the collapse of that party was the War of 1812 and the perception of Federalist disloyalty in the fight against Britain. Federalist opponents of the war, concentrated in New England, traded actively with the enemy during the conflict and refused to provide militias to fight for the United States. There were even rumblings of secession amid a secret meeting of dissident Federalists at Hartford in the war’s last months.

The Federalists had earlier presented themselves as the law-and-order party of the day, as underscored by the controversial Alien and Sedition Acts which they had enacted in 1798. But the politically fatal discrediting of the party was due to it being associated with sedition during the later war against Britain. The present-day Republican Party, also quick to strike a law-and-order pose, has now become associated with the most serious act of sedition in decades The analogy can be extended by noting that prior to this month’s ransacking of the Capitol by the pro-Trump mob, the greatest damage to that citadel of democracy was when the British burned it in the War of 1812.

The disappearance of the Federalist Party and its eventual replacement by the Whigs did not mean losing the articulation of important interests, a political function necessary for a healthy democracy. The “American System” of Whig leader Henry Clay, with an emphasis on infrastructure improvements, the expansion of commerce, and a strong economic role for the federal government, was a natural and worthy successor to ideas that the Federalist Alexander Hamilton had promoted. The interests still got articulated but without the seditious baggage of the Federalist Party.