The American Way of War and Delusions of ‘Victory’ 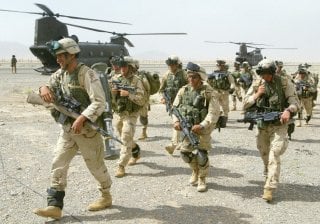 The recriminations and anguish that are dominating discourse in America in response to events in Afghanistan have roots in distinctly American ways of viewing war and peace.  Those ways are part of a larger lens through which Americans have tended to perceive the outside world.  That lens has been shaped by the unique history and circumstances of the United States, such as how two ocean moats have insulated it from most of the world’s threats and insecurities.

The traditional American notion of war and peace is non-Clausewitzian.  It rejects the Prussian theorist’s concept of war as an extension of politics by other means.  The American conception instead has been that war and peace are two distinct and separate states of affairs.  According to this view, a bright line marking a transition from war to peace should be characterized by a clear-cut U.S. victory, after which Americans put down their swords and return to their plows.

This view has especially characterized what Walter Russell Mead has called the Jacksonian tradition of American thinking about foreign relations, which has tended to be the most influential strain of thinking about war and peace throughout most of American history.  In the traditional Jacksonian view, war is something resorted to only infrequently, when a foreign threat arises that is sufficiently serious for the citizenry to rise up in anger and vanquish the threat.  It is no accident that Donald Trump—always attuned to the most visceral inclinations of that portion of the American citizenry to whom he appealed—hung a portrait of Andrew Jackson in the Oval Office.

Most of America’s history of wars has nurtured such conceptual habits.  The Revolutionary War was considered a victory—after all, the colonies did win their independence—even though most of what the Continental Army accomplished was merely to survive until events in Europe turned the colonials’ way.  The War of 1812 was a draw, but many Americans thought of it as a victory because the last battle of the war—fought after the peace treaty had been signed on the other side of the ocean—was Jackson’s smashing victory at New Orleans.  The Mexican War was a big U.S. conquest, and the Spanish-American War was an even quicker and easier U.S. win.  In World War I, American doughboys were decisive in turning the tide of war and leading Germany to sue for peace.  Then World War II became a model war for many Americans, ending with what is usually described as an unconditional surrender by the hated Axis powers.

After World War II, there arose a different American strain of thinking, accentuated further when the Cold War ended, which was to view the United States as the indispensable superpower.  This led to near-continuous American involvement, including military involvement, around the world, from the “police action” in Korea to the “forever wars” of today.  This conception has now been around long enough and has influenced policy decisions enough that it has become as firmly entrenched in much American thinking as the Jacksonian conception.

The basic problem has involved the resulting mash-up between the traditional and newer patterns of thinking.  American use of military force overseas has become far more frequent than under the Jacksonian idea of an infrequent resort to arms to eliminate only serious threats.  And yet the Jacksonian standard of achieving something that can be called “victory” continues.  The oxymoronic result is illustrated by Douglas MacArthur’s declaration during the police action in Korea that “in war, there is no substitute for victory”—an attitude that helped provoke Chinese intervention and extend that conflict for two more years.

Several other ill consequences may ensue from the conceptual mash-up.  Sometimes the United States seems to pursue objectives that, although they might count as indicators of victory if they could be achieved, are unobtainable.  The North Vietnamese regime that was the adversary in the Vietnam War was never going to fall to its knees and cry uncle.  Afghanistan was never going to be made into a western-style liberal democracy.

Sometimes U.S. leaders, aware of what is unobtainable but still feeling obliged to pursue something that could be called a win, are uncertain about their objectives and as a result lack a clear strategy.  Such a lack is the number one conclusion of the lessons-learned report just issued by the Special Inspector General for Afghanistan Reconstruction.

Often there is blindness to the need for compromises, including even with loathed wartime enemies, in order to terminate a conflict or at least to terminate U.S. involvement in the conflict.  The Trump administration was correct to negotiate with the Taliban—notwithstanding the much-criticized subsequent history of the deal that was negotiated—because the Taliban represent a significant element, politically as well as militarily, that unavoidably is part of the future of Afghanistan.

And sometimes, looking for an elusive Jacksonian victory but unable to find it, U.S. leaders just keep a conflict going on and on.  That is what happened over twenty years in Afghanistan—until President Biden’s politically courageous decision to end what should have been ended long ago.

Clausewitz was right: war ought to be thought of not as an isolated phenomenon with its own standards of success and failure but instead as one more instrument for pursuing national objectives that also get pursued through diplomacy or other instruments.  As with any other political matter, the pursuit rarely involves absolutes of victory and defeat but rather compromises, negotiation, recognition of competing interests, calculations of costs versus benefits, course corrections, cutting of losses, and partial fulfillment of objectives.

Warfare, and terminating wars, always involves bargains.  Even what are described as unconditional surrenders are rarely unconditional.  The surrendering side bargains away its ability to resist with all its remaining strength.  Japan at the end of World War II had considerable such ability remaining, and an invasion of the home islands against a still-resisting Japan would have been extremely costly to the United States.  In the bargain that was struck, the Japanese laid down their arms in return for no more atomic bombs and a benevolent occupation in which they kept their emperor.

When the United States ends most wars, it is the dominant American patterns of thought rather than the wisdom of Clausewitz that prevails.  And so there will likely be, years into the future, cries of “who lost Afghanistan” even though Afghanistan was never America’s to lose.