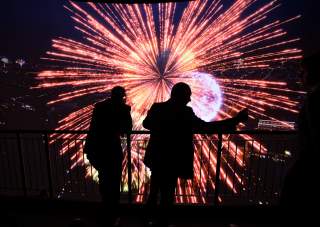 Russian interference in domestic American politics is a large and complicated story, full understanding of which is only beginning to be reached by the media and independent analysts.  Some of the lessons and implications of that story, especially as it relates to the 2016 election, can only follow completion of the relevant investigations.  But one aspect of the story need not await the official inquiries.  This aspect concerns how many of the accusations and themes that Russia promoted through social media merely replayed what had originated with American sources.  In stoking division and discord in U.S. politics and society, Russia was saying things not much different from what some Americans already were saying about other Americans.

This technique is somewhat different from the classic type of dirty trick—of which Russia has been a past master but by no means the only practitioner—by one state to manipulate the internal affairs of another country.  The classic method involved fabrication of falsehoods before they were inserted into the public discourse of the targeted country.  Much of the material the Russians have used recently in targeting the United States contained falsehoods, too, but in this instance the foreign manipulator was often not the fabricator.

This story also represents a new twist on the old concept of blowback, which usually refers to messages intended for foreign audiences coming back to reach the ears of domestic ones.  The United States has laws and procedures intended to prevent this sort of thing, by restricting the activity of some of its agencies that operate overseas.  In the current instance we have a sort of double blowback, in which messages that started in domestic discourse were picked up by a foreign power and then reinserted into domestic American discourse in ways intended to serve Russian interests and damage U.S. interests.

What makes this type of Russia technique possible are the coarseness, intemperance, and inflexibility that have suffused American politics over the past couple of decades.  The process has been one in which large parts of the American political class have given party and ideology higher priority than values that all Americans can share.  The process has involved increasingly frequent instances of ends—again, defined in terms of party and ideology—being used to justify extreme and irregular means.  It would be impossible to identify a single origin of this process, but probably the closest thing to a prime energizer of it was the political warfare that Newt Gingrich launched following the 1994 election.

This trend in American politics has caused significant damage to the republic even if foreign interference were not an issue.  The damage has included the now-familiar policy paralysis and ineffectiveness of Congress, as well as serious damage to the integrity of American democracy as it relates to exercise of the right to vote and whether elected institutions are representative of the popular will.  That all of this enhances an opportunity for the Russian government to muck around in U.S. politics is an added piece of damage.  The situation is similar to how a body weakened by disease is more vulnerable to predators, parasites, and other maladies from the outside.

Add the Russian interference to any tally of the ways in which domestic political dysfunction has consequences involving foreign relations of the United States.  The other ways include loss of the soft power that comes from being a positive example of an effective democracy.  They also include loss of credibility when internal political divisions become so sharp and spiteful that a change of power means trying to erase every commitment made by a previous incumbent.

The Russian offensive has raised the issue of the political role of social media and whether measures should be taken to reduce the opportunities for similar foreign manipulation in the future.  The issue deserves consideration, and one can envision useful steps involving, for example, greater transparency regarding the true owners of accounts.  But at least as deserving of attention as the methods of propagating material are the reasons that the material took the form that it did in the first place.

As for what role the Russians played in giving the United States a President Donald Trump, the fullest conclusion needs to take account of more than whatever shenanigans specific to the 2016 election the special counsel or other inquiries may uncover.  The Russians hardly were the originators of, but did help to sustain, the sort of hateful and intolerant politics that already had infected the United States and were a major factor in putting such a demagogue in the White House.