Assad Will Have to Stay for Awhile 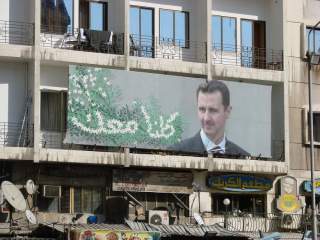 The intractable, multidimensional civil war in Syria is as intractable, and immune to clean solutions, as it ever has been. The basic conundrum is that we loathe two players in the conflict—the Assad regime and ISIS—and would like to be rid of them both, but they are the two strongest players and each constitutes the most significant opposition to the other. This multilateral structure of the war, however frustrating and policy-complicating it may be, is for the foreseeable future inescapable.

We are reminded, especially by those in what passes for a secular opposition in Syria, that the regime is genuinely brutal, with its barrel-bombing of civilian areas and similarly inexcusable tactics. But making sound policy, by the United States or any other outside power, is not a simple matter of reading a brutality meter—and that was true even before the most recent act of unspeakable brutality by ISIS. The most prudent, and least bad, U.S. policies toward Syria need to be based on the assumption that Bashar Assad is not likely to go away any time soon. There are at least three reasons that policy should be based on that assumption.

One reason involves a pragmatic recognition of reality, in that Assad's departure is simply beyond the ability of the United States or any player inside Syria to bring about any time soon (barring a full-scale U.S. military intervention, which would be folly for a host of other reasons). There are soft and brittle parts in this regime, but it would be useful to recall how many predictions of the regime's demise since the Syrian war began have proven to be wrong.

A second reason is that in most conflicts it would be a prescription for failure, and/or for embarking on an incredibly costly enterprise, to take on simultaneously two different antagonists who are fighting against each other. Think about what World War II in Europe would be like if the United States had tried to take on Nazi Germany and the Stalinist USSR at the same time.

The repeatedly expressed hopes placed in a Syrian “moderate opposition” as an alternative winning horse to back in this contest have repeatedly been shown to be held in vain. This situation is not something that can be corrected with more voluminous aid or more alacrity in dispensing it. If the dispensing has been measured and hesitant, that is an appropriate recognition of how with the fluid line-up of protagonists in this civil war, men and materiel easily move from one participant to another and get into what we would consider the wrong hands.

A third reason is that collapse of the current Syria regime under the pressure of war could easily mean the loss of the only structure separating Syria from anarchy that would be even worse than what exists there now. We should have learned some lessons in this regard from what happened in de-Baathicized Iraq and what is still happening today in Libya.

In recent months the Obama administration appears to have accepted an understanding of these realities and talks less than it did earlier about the ouster of Assad as a policy priority. Because of that, it has been criticized by some other governments in the region who have different priorities. The United States needs to consider its own interests in setting its own priorities rather than bowing to the priorities of others. The Turks, for example, have their own particular issues with Assad and Turkey-specific concerns about any cooperation with the Syrian Kurds. Many Arabs, especially in the Arabian Peninsula, think of Syrian affairs the same way they think of many Middle Eastern affairs, viewing them in terms of sectarian conflicts and asking first of all, “What's good for the Sunnis?” That is not the sort of question that should guide U.S. policy.

In the longer run, significant political change in Syria will be necessary for that country to have any hope of stability. Bashar Assad will not be atop any Syrian political order that is reasonably just and stable. But the near term is what we face now, and what needs to be navigated successfully before we ever get to the long term.