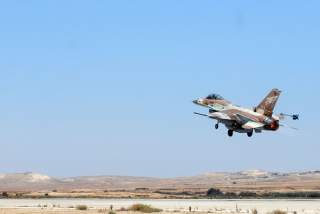 The score, as of late Friday, in the contest being waged in the Gaza Strip and Israel was 114-0, with the side in the lead continuing to run up the score. This is not some nightmare of a Brazilian soccer fan, but instead the deaths of men, women, and children, more than three-quarters of them civilians, according to the United Nations humanitarian affairs office. All of them are Palestinians in the Gaza Strip; so far in this match no Palestinian rockets have killed any Israelis.

The term asymmetric warfare is commonly used, of course, but to refer to different techniques for inflicting violence for political purposes. What is going on now in Gaza is highly asymmetric in terms of the amount of death, injury, destruction, and overall misery being inflicted by one side on the other. Perhaps the usual use of the term asymmetric warfare has contributed to warping our ability to evaluate what has been going on in this conflict. There is a tendency to think of death inflicted overtly by an F-16, at least if it is operated by someone labeled an ally, as somehow more legitimate than whatever a clandestinely deployed rocket can inflict.

We have curious habits in how we regard symmetry and asymmetry in armed conflicts and especially the unending series of conflagrations between Israel and Palestinians. In contrast to the assumed asymmetry about the legitimacy of different ways of inflicting violence, in other respects we speak as if there is perfect symmetry. It has become de rigueur to criticize excesses on both sides, which of course there have been, and to appeal for reasonableness on both sides, which of course there should be.

In major, glaring respects, however, this conflict is highly asymmetric, and not only in one side's physical ability to inflict far greater destruction on the other side. The larger Israeli-Palestinian conflict is one in which the far more powerful actor is occupying (in the case of the West Bank) or strangling (in the case of the Gaza Strip) the other side. It is also a conflict in which for many years now, one side and its Arab backers have repeatedly indicated their willingness to make a complete peace as long as this side can have its own state on the small part of Palestine left after Israel's war of independence, while the other side, through its actions on the ground as well as statements of its leaders, indicates its intention to hold on to all the land it has captured through force of arms, save perhaps for some carefully controlled bantustans.

Speaking in symmetrical terms carries a sense, even if a false sense, of fairness and equanimity, and of getting beyond squabbles and trying to achieve peace and stability. Parents exhibit this tendency when they tell squabbling children that they don't care who started the argument and instead just want both kids to behave. One can sympathize with John Kerry, and other diplomats who have tried to do something about the Israeli-Palestinian conflict, if they feel the same way as parents.

But who started a fight does matter in how we should judge it and react to it, especially if it is a fight in which scores of innocent people are getting killed. Any careful and objective review of events leading up to the current conflagration (the timeline compiled by John Judis is one of the best) leads to the inescapable conclusion that this war is being fought because the government of Benjamin Netanyahu chose to launch it, capitalizing on grief over the kidnapping and murder of three Israeli teenagers to strike another blow against Hamas and even more so against its most recent unity agreement with Fatah, as well as providing another excuse for occupying the West Bank indefinitely. The conclusion is supported not only by the sequence of events but also by Netanyahu's immediate blaming of Hamas for the crime without—still—providing any evidence; all indications are that the perpetrators of the kidnapping were rogue actors who may have had their own reasons to try to subvert the unity deal. The conclusion also is supported by the Israeli government's extraordinary tactic of not informing the Israeli public or even the families of the victims when it knew the teenagers were dead—all the better to try to justify the government's wholesale actions in the West Bank in which several Palestinians were killed and, in what amounts to a reneging on a previous prisoner exchange deal reached with Hamas, hundreds more have been incarcerated.

By contrast, before all this started Hamas was giving no indication that it was looking for an armed conflict. Besides reaching the unity deal under which it would support Mahmoud Abbas's negotiating approach toward resolving the conflict with Israel, Hamas was observing a cease-fire. Until the Israeli government's forceful moves after the kidnapping/murders last month, Hamas had not fired any rockets into Israel since that cease-fire was reached in November 2012, despite several earlier Israeli provocations that Hamas considered to be violations of the cease-fire. Hamas even tried to restrain other groups from firing rockets after Israel had begun its wholesale incarcerations in the West Bank.

American habits in perceiving the Israeli-Palestinian conflict dull not only American policy judgment but also Americans' moral sense. The Netanyahu government's wreaking of death and destruction today in the Gaza Strip is condemnable. It is wrong, in multiple senses of the word, for the U.S. House of Representatives to endorse that infliction of death and destruction, as it did on Friday.

Pretending to be fair by treating something as symmetrical when it is not impairs the ability to distinguish right from wrong, of which there is plenty of both in the world.