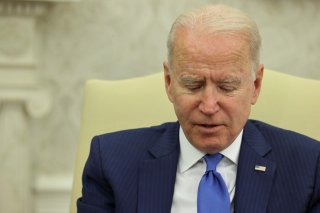 National interests often do not correlate with headlines.  Some things that produce bad news may still be for the greater good, just as surgery produces pain and scars even if it improves the health of the body.  Conversely, trying to avoid discouraging headlines is often not the best way of serving the nation’s larger interests.

The distinction involved is partly one between the short term and the long term.  Daily or weekly news cycles are on a different time scale from a proper assessment of whether the nation’s interests are being advanced or set back.  It also is a matter of what is highly visible—especially highly visible bad news—being different from less visible and less tangible but nonetheless important aspects of the well-being of the nation.

Regarding foreign policy, another relevant distinction is between all that is ugly in the world and whatever subset of the ugliness is in the power and the interests of the United States to improve. There is no shortage of happenings abroad that understandably make caring Americans cringe, but only a few of those happenings are sufficiently damaging to U.S. interests to warrant the costs and risks involved in overcoming them—if the United States is able to overcome them at all.

The civil war in Afghanistan is apt to generate many unfavorable headlines in the weeks and months ahead.  This is not a firm forecast, and anyone making such forecasts about the mid-term future of Afghanistan ought to remember how the Soviet-supported regime of Mohammad Najibullah hung on much longer than almost every observer expected when the Soviets withdrew their forces from Afghanistan in 1989.  Nonetheless, the weaknesses of the current Afghan regime that have long been apparent are still very much present.  The most likely scenarios for Afghanistan during the coming year involve either a takeover by the Taliban of most or all of the country, or Afghan-style bargaining that gives the Taliban major influence in a new political and social order.

A new order will include features that most Western observers would consider unattractive or even barbaric.  That unattractiveness does not negate the correctness of the military withdrawal that multiple U.S. administrations failed to accomplish and that the Biden administration finally is achieving.  That correctness rests fundamentally on two concepts that proponents of extending the U.S. war have never been able to refute.

One is that there is no task that the U.S. military can convincingly accomplish in the coming years that it was unable to accomplish in the previous twenty years.  If twenty years is not enough, then how many more years would be enough? And what will change that would make success any more likely in the future than it was in the past?

The other concept is that among all the places in the world with generous shares of ugliness and instability, Afghanistan is hardly unique.  The legacy of 9/11 causes Americans to see it as unique with regard to terrorism, but it is not.  If terrorists who would do harm to the United States really needed to pitch a tent in some unstable faraway place, there are plenty of other such places they could pitch it.  And the distance that still separates Afghanistan from being a liberal democracy is not more harmful to U.S. interests than is the case with many other countries that are just as far from being liberal democracies.

The one special U.S. responsibility in Afghanistan concerns the safety and welfare of those Afghans who worked directly for the United States.  After a slow start, the Biden administration now is moving to fulfill that responsibility.

As bad headlines about Afghanistan appear, President Joe Biden will be roundly criticized for his decision to withdraw.  His political opponents will, of course, milk the issue for whatever political advantage they can get from it.  One can almost hear already the cries of “who lost Afghanistan” in the 2022 and 2024 election campaigns.

Even many of those who tend to support Biden on most issues will recoil from much of what is likely to unfold in Afghanistan in the months ahead.  The Washington Post’s editorial page, which probably is representative of this perspective, concluded a recent editorial on the subject this way: “The descent from stalemate to defeat could be steep and grim. We wonder whether he [Biden] has fully considered the consequences.”

The answer to that last question is: he almost certainly has.  Biden has immersed himself in the Afghanistan issue at least as deeply as any other American politician of the last few decades.  His understanding of the issue and the country is strong (as I was able to observe firsthand in the past, including in a discussion of Afghanistan with him when he was vice president).  That understanding extends to what will likely ensue following the U.S. troop withdrawal.  Biden will have considered the consequences, and he will not be surprised by them.

As an empathetic and caring man, Biden will cringe as much as other Americans over some of what Afghans are likely to endure in the months ahead.  As an experienced politician, he knows he can expect sharp criticism as a result.  And he has still concluded, rightly, that bringing this 20-year-old military expedition to a conclusion is in the best interests of the United States.

In short, Biden has decided to take the heat because it is the right thing to do, notwithstanding the political costs to himself.

A major part of responsible political leadership is to lead the country in the right direction even when in the short term it generates discouraging headlines rather than encouraging ones.  Biden will be criticized, but he is exercising stronger leadership on Afghanistan than his predecessors ever did.