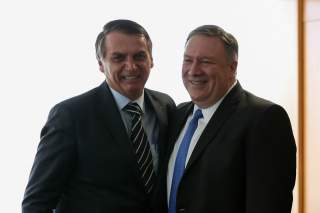 Newly inaugurated Brazilian president Jair Bolsonaro is starting to live up to the label “Trump of the tropics.” The similarity that is likely to have the broadest and most destructive effects is his disregard of the danger of planetary catastrophe through climate change. The presidency of Brazil is an especially important office in this regard because of its power over the fate of most of the Amazon rainforest.

Bolsonaro has long made clear his intention to destroy more of the forest, supposedly in the name of economic development and with visions of ever more cattle ranches and soybean farms. He has wasted no time in using his powers to that end. On his first full day in office, he issued an executive order giving the agriculture ministry authority to dispose of lands claimed by indigenous peoples. This measure clearly is a first step toward greater exploitation of the Amazon region by agribusiness. Besides reflecting Bolsonaro’s lack of concern for the environment, it also reflected his disdain for the native peoples of the region. He sees no value in protecting their cultures and way of life.

The Amazon is the world’s largest rainforest. It is an enormous carbon sink that breathes in carbon dioxide and breathes out twenty percent of the world’s oxygen. There is no other single ecosystem that is as important in preventing a runaway planetary greenhouse effect. Although parts of the rainforest are in other South American countries, sixty percent of it is in Brazil.

Much destruction preceded Bolsonaro. Earlier deforestation has meant that the great carbon sink already is absorbing significantly less carbon than it did as recently as a decade ago. Some previous Brazilian administrations gave serious attention to the problem and slowed the pace of deforestation. But in more recent years enforcement against deforestation has lapsed amid political turmoil that included the impeachment of former president Dilma Rousseff.

The current precariousness of the Amazon rainforest stems not only from the cutting and burning that already has taken place but also from feedback loops in which reduction of the forest sets in train natural processes that lead to further reduction. As the term “rainforest” might suggest, the jungle makes much of its own weather. Less rainforest means less rain. Further deforestation is likely to lead to dry savanna, not to something that is as green and wet as the existing jungle.

The lushness of the rainforest disguises how fragile the ecosystem is in other respects. The biological richness is confined to a thin layer, and the soil underneath is mostly poor and infertile. Would-be growers of crops and of grass for livestock come to realize that. But by the time such realization is great enough to have political impact, it may be too late to save the rainforest.

Earlier experience has provided some lessons in this regard that should have been heeded, including lessons involving North Americans. In the 1920s the industrialist Henry Ford established an operation in the Brazilian rainforest intended to produce rubber for the tires on automobiles the Fort Motor Company manufactured. The company cleared jungle to construct an entire town, known as Fordlandia. Among the problems the company encountered was the difficulty in industrializing the relevant botanical process. Rubber trees in the wild do well when widely scattered among other species; when put close together on Ford’s plantation they were easy prey for pests and disease. Ford abandoned the project after just a few years, without producing any rubber for those tires back in the United States.

Trumps of both the tropics and temperate zones have assaulted in odious ways what is often called the international order, and the assault has been destructive. But that order, important as it is, does not offer an effective means of global governance when it comes to planetary patrimony such as the Brazilian rainforest, which history and line-drawing have placed under the control of a single government. Unfortunately, Bolsonaro answers politically not to the planet or to all its current and future inhabitants, but rather to a far smaller political base that his populist rhetoric sufficiently swayed to win him the presidency.

The “butterfly in Brazil” concept comes from the branch of mathematics known as chaos theory and concerns how small changes in initial conditions can lead to much larger systemic effects. The idea is that a butterfly flapping its wings in Brazil could be part of what leads to a tornado in Texas. Bolsonaro in Brazil threatens to have climatic effects a lot worse than one tornado in Texas.