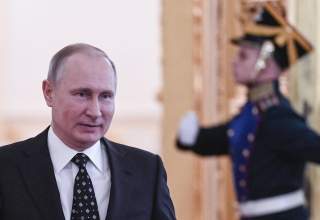 Late this month Russia will host and broker a new round of Syrian peace talks in the Black Sea resort town of Sochi.  The Sochi talks will be an extension of talks that had earlier taken place in Astana, Kazakhstan, under the joint sponsorship of Russia, Turkey, and Iran.  If there is to be any diplomatic momentum in the weeks ahead regarding the Syrian conflict, that momentum most likely will be found in Sochi and Russia.  Although some Syrian opposition elements are still hoping the United States will snatch diplomatic leadership on the issue away from Moscow, other relevant players regard Sochi as the place to be rather than a place to avoid.  This evidently includes Saudi Arabia, a principal bankroller of the Syrian opposition, and United Nations special envoy Staffan de Mistura, who has had his own intermittent Syrian negotiations in Geneva.  Russian officials describe their efforts as complementing rather than replacing the U.N. talks in Geneva, and they have expressed hope there will be another Geneva round before the Sochi meeting.

These developments further move Russia into, and the United States out of, a leading diplomatic role in the Middle East.  They come on the heels of the Trump administration, with its announcement regarding Jerusalem and the U.S. embassy to Israel, going beyond any of its predecessors in not even pretending to be an honest broker in another major Middle East conflict, the one between Israel and Palestinians.  Stung by its self-induced isolation from that move, the administration has since tried to bludgeon its way back into a diplomatic role on that conflict by threatening the Palestinians with an end to relief for refugees if the Palestinians do not approach peace-making the way the Trump administration wants them to.  This clumsy threat is a tacit admission that the United States under this administration has forfeited the confidence necessary to be a diplomatic leader.

Reflection on past U.S. leadership in peace-making in the Middle East—think of Henry Kissinger and shuttle diplomacy, Jimmy Carter and the Camp David Accords, or James Baker and the Madrid conference—shows how far Washington under Trump has fallen in this business.  The fall has multiple causes, one of which clearly is the overall disdain the current administration has for diplomacy and the ability to practice it.

Other causes are not unique to the Trump administration and instead are tendencies that have appeared before it, while still influencing much thinking in Washington today.  One is an aversion to doing any business, diplomatic or otherwise, with certain despised parties.  In the Middle East today this mostly means Iran, the exclusion of which would make difficult any progress toward resolution of the conflict in Syria.  Another is a proclivity for taking peremptory substantive positions (such as Jerusalem as capital of, and only of, Israel, or “Assad must go” in Syria) that, formally or not, function as preconditions that greatly narrow the available bargaining space.  Yet another is the equating of leadership or involvement with military action.  Much is said about how the absence of a significant U.S. military presence somewhere creates a “vacuum” that will be filled by adversaries, but seldom is this same metaphor applied to an absence of significant and effective U.S. diplomacy.

An irony is that some of the same participants in U.S. policy debates who exhibit these tendencies also lament that Russia is becoming a bigger player in Middle Eastern affairs.

The United States does not have to be the impresario for every significant peace negotiation.  Sometimes someone else is better equipped to play that role well.  Regarding the Israeli-Palestinian conflict, the United States has shown itself to be so hog-tied by its own domestic politics (as demonstrated in extreme form under Trump) that others, such as the European Union, probably should step up to more of a leading role.  But in general, for the United States to forgo the role of impresario is also to forgo certain advantages to the country that plays that role.

Russia can contribute positively to diplomacy on conflicts in the Middle East, and the most positive results would result from Russia and the United States working together.  But simply forfeiting diplomatic leadership to Moscow helps neither the cause of peace in the Middle East nor U.S. interests.

Image: Russian President Vladimir Putin walks past an honour guard as he attends a meeting of the State Council at the Kremlin in Moscow, Russia December 27, 2017. REUTERS/Alexander Nemenov/Pool