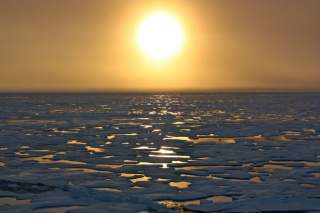 The Department of Defense recently released a "Climate Change Adaptation Roadmap" that relates the department's business to global warming and the accompanying climatic changes. The document is welcome in a couple of respects beyond assuring us that the department is properly tending to the various respects in which climate change is affecting its own operations and missions. First, it is a straightforward, unquestioning recognition of the reality and problem of climate change, by the largest executive branch department in the U.S. government. Second, by linking the problem to national security it may help to get the attention of at least some people who have no respect for tree huggers but get a rise out of any use of the U.S. military.

The document relates climate change to national security in two basic ways, as stated in the covering statement by Secretary of Defense Hagel. One is that climate change is a “threat multiplier” that can exacerbate problems that are already well known and which can lead to situations in which overseas involvement of the U.S. military may become an issue. Droughts and other climate-related resource scarcity, for example, may intensify conflicts over resources. The other way, which is what most of the document is about, is that climate change has numerous impacts on the U.S. military's operations, training, and facilities. The heavy concentration of military installations in Virginia's Hampton Roads region, for example, will mean a high impact on the military of the danger that low-lying region faces as one of the U.S. coastal areas most affected by rising sea levels.

These all are important matters, and it is appropriate for the Department of Defense to focus upon them. A document such as this carries the hazard, however, of suggesting that climate change is a national security issue only insofar as as it impinges on matters most traditionally considered to involve national security, especially matters involving the military. That is an artificially narrow conception of national security, consistent perhaps with some ideas of the past but not reflecting the fundamental meaning of national security.

Central to that meaning is the physical well-being of the nation's citizens. That well-being can be endangered by human action either directly, as with an invasion force or a terrorist group bombing people in the United States, or indirectly, as with the multiple physical effects of global warming. Increasing flooding endangers the security of the citizens of Hampton Roads whether there were any military bases in their neighborhood or not.

The security implications of climate change for Americans entail several causal paths, some more direct than others. They include the risk of being killed by extreme weather events, the impairment of food supplies, the loss of forest resources through northward migration of pests, and much else. But the implications do not even have to depend on these sorts of secondary events. The sheer heating up of the homeland matters, too. The health and attractiveness of the United States, and ultimately its strength, depend greatly on the country's fortunate geographic and climatological circumstances. Any impairment of those circumstances is in a real sense a loss of security, too.

As long as we remember those things then it is good to see a document such as the DoD roadmap, which might help to engage some people who have a narrower concept of national security. We need all the help on this we can get, given the continued prominence of American political figures whose views on climate change sound more in tune with the days when Earth was thought to be flat.