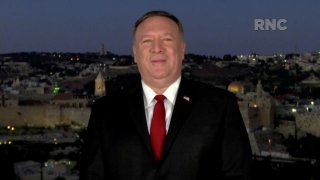 Secretary of State Mike Pompeo’s speaking role in the Republican National Convention was contrary to the practice of other secretaries of state, in both Republican and Democratic administrations, as well as violating his own department’s code of conduct. Even prior secretaries such as Hillary Clinton who, like Pompeo, had aspirations for higher office stayed far away from any involvement in their parties’ conventions.

Pompeo’s appearance in the Republican show was consistent with his conduct throughout Donald Trump’s presidency. Pompeo, when he was a congressman, initially got Trump’s attention by exploiting a tragic turn of events in Libya to aggressively attack Clinton. That performance won him the job of CIA director, a position that ought to be kept even farther away from partisanship than the secretary of state’s job.

Pompeo’s subsequent promotion to the foremost cabinet position—unlike the many other senior officials in this administration whom Trump has discarded once they became the least bit inconvenient or annoying to him—testifies to the extent to which he has shaped his conduct to appeal to Trump and to Trump’s political base, which he hopes to inherit. The blurring of partisan politics and official duties that Pompeo’s convention speech entailed meshes with the similar recurrent blurring by Trump himself, which the president continued on the same night that Pompeo spoke.

Such conflation impairs good government across a wide range of issues. The costs are especially severe with a secretary of state because foreign governments get involved in the resulting messiness and amplify it in ways that hurt the U.S. national interest.

Pompeo’s role in wrecking good governance starts with the damage done to the Department of State itself, as reflected in disrespect for the Foreign Service and everything that implies regarding morale and recruitment. The damage will take many years to repair. Probably the low point of this sad process was Pompeo’s abandonment of U.S. Ambassador to Ukraine Marie Yovanovich, a respected diplomat whose only offense was to do her job properly, including opposing corruption, and in so doing got in the way of Trump’s and Rudolph Giuliani’s dirt-digging caper in Ukraine. The damage has been compounded by Trump administration ambassadorial appointments, which have featured an unusually large number of unusually unqualified political supporters of the president.

Having an unrelenting partisan warrior such as Pompeo as secretary of state corrupts U.S. foreign policy with narrow political motives more than it otherwise would be. In any senior policy discussions, there is no one to argue, as a secretary of state should, for the best ways to advance the interests of the nation as a whole.

That Pompeo spoke to the Republican convention while on a foreign trip supposedly devoted to diplomatic business compounds this and the other problems that his appearance involved. Based on his itinerary, he evidently is trying to milk as much as he can from the recently announced establishment of diplomatic relations between Israel and the United Arab Emirates. This arrangement between two states that were not warring against each other brings peace to no one and instead sharpens lines of conflict between the Gulf Arabs and not just Iran but also Turkey, in disputes mired in different views about political Islam and the Muslim Brotherhood. Pompeo’s use of Jerusalem as a prop leaves unstated how the Israeli-Palestinian conflict is very much unresolved and how the development with the UAE makes resolution less likely because it reduces further any Israeli government incentive to resolve it.

The Trump administration’s enticement of the Emiratis to upgrade their relationship with Israel is another in a series of gifts that the administration has given the Netanyahu government. Other gifts have included recognition of Jerusalem as Israel’s capital and of Israeli annexation of the Golan Heights. The United States has gotten absolutely nothing in return for the gifts. It is only the political fortunes of Trump and the Republican Party that—or so Trump hopes—get any return payment.

In one of Trump’s occasional candid blurts about his political motives, he said that the move of the U.S. embassy to Jerusalem was “for the evangelicals”—while expressing disappointment that American Jews did not seem as excited about the move as the evangelicals were. This is not the sort of consideration that ought to motivate important U.S. foreign policy decisions. Such decisions ought to serve the interests of the entire nation and not to cater to one subset of it, including subsets defined by the eschatological beliefs of a particular revealed religion.

Pompeo, an evangelical Christian himself, must have felt in his element standing on a Jerusalem rooftop while preaching to the political faithful back home. But a secretary of state who takes seriously the responsibilities and constraints of his office would not have done anything of the sort.

When foreign policy is blatantly conducted to appeal to a subset of voters at home, foreign governments get a vote too. Those governments are apt to react in any of several ways detrimental to U.S. interests.

When the foreign policy coming out of Washington is the narrowly based policy of only one faction, foreign governments are conditioned to expect much inconsistency from one U.S. administration to another. The foreigners might be reluctant to make commitments or reach agreements with the United States if the drivers of current U.S. policy are parochial and ephemeral. They may decide their best approach is to wait for the next U.S. election. This is basically Iran’s current approach.

Alternatively, a foreign government may try to appeal to the fancies of whoever is in power in Washington at the moment while shoving aside more fundamental and long-term U.S. objectives. Such reaction may be largely harmless ego-polishing, such as talk about Trump Heights in the Golan or Fort Trump in Poland. But it is a diversion from diplomacy that would advance real U.S. interests.

Worst of all is when a highly partisan approach to foreign relations in Washington encourages foreign governments to indulge in the same partisanship. Thus, Russian president Vladimir Putin has even more of an incentive to interfere in this year’s U.S. election than he did, as confirmed by the Senate intelligence committee’s report on the subject, in 2016. That makes Putin all the more of a problem for the United States.

Pompeo’s Jerusalem performance encourages additional interference by Israel, the foreign state that has interfered in U.S. politics more than any other. The Trump/Pompeo handling of Israel-related issues has moved matters even farther from what would be a healthy U.S.-Israeli relationship to what instead is a Likud-Republican partisan alliance, with each side using the other’s cities as props in election campaigns.

The Founding Fathers were very concerned about the deleterious effects of partisanship on the new republic’s foreign relations. James Madison wrote in The Federalist Number 42, “If we are to be one nation in any respect, it clearly ought to be in respect to other nations.” The United States may be as far away from that ideal as it has ever been.