Deep-Six the Notion of a "Deep State" 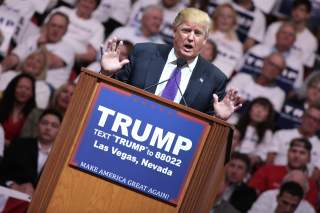 The concept does correspond somewhat to situations in some foreign countries, with political systems much different from the one in the United States.  In such countries, the idea of a deep state is a statement about who exercises preeminent power, rather than about a challenge from some part of a security apparatus to those who do exercise it.  The concept could apply, for example, to Algeria, where, ever since revolution and independence, the greatest concentration of decision-making power has been with leadership of the military and security services, as implied by the label le pouvoir that has long been applied to that leadership.  Even more to the point is Russia, which is ruled at the top by ex-KGB man Vladimir Putin, assisted by numerous other security service types known as siloviki who occupy many influential positions throughout the regime and Russian economy that are not part of the security services at all.  Fortunately, the U.S. political system doesn’t look or operate anything like that.

A supposed American deep state is purported to involve intelligence agencies and perhaps other parts of the national security bureaucracy that collectively, and without checks or accountability from above or anywhere else, surreptitiously influence U.S. politics or policy for that bureaucracy’s own parochial reasons.  Anyone who has worked in that bureaucracy will recognize such a concept as fantasy rather than reality.  For those who have not worked there, the fundamental point to bear in mind in understanding why the deep state concept is fantasy concerns the raison d’être of the agencies involved and of the jobs of people who work there.  It’s all about objective and nonpartisan service, involving tasks such as collection or analysis of intelligence, under whatever political leadership the American people have elected.  If there were to be any straying from that ethic—which is as well-entrenched as any occupationally related culture—then the agencies involved and the individuals within them would become far more vulnerable than they are now.  There would be reason for each new political leadership to be able to fire the whole bunch.  Employees of the security agencies have no incentive to move things in that direction.

Those employees are self-selected; nobody gets conscripted into those agencies.  The work force in those places thus consists of people who are happiest to work apolitically for many years on their challenging but intriguing problems of collection or analysis or other tasks involved in securing the nation, and in return to forgo, as long as they are in the service, other ways of trying to influence national policy.  Those who do seek to practice other ways of influencing politics and policy find that they are misplaced and generally leave in favor of other careers.

The presumption that the bureaucracies concerned have a collective political intent, which is part of the notion of a deep state, runs up against two problems.  One is that political preferences are not worn on sleeves in these places, and not discussed in the course of doing the work, because there is no good reason to discuss them.  If there were some community of political intent within those bureaucracies, it would be hard for the people who supposedly are part of such a community to discover the community in the first place.  The second problem is that to the extent one can glean political preferences indirectly—through things, such as bumper stickers on cars in agency parking lots, that do not violate the Hatch Act—one would see that people who work in these agencies, like other Americans, exhibit a diversity of preferences.

The influence of agencies that are part of the national security bureaucracy tends to vary directly with how well they have performed their prescribed, proper mission.  Richard Helms, who was director of central intelligence during Lyndon Johnson’s administration, reportedly won a seat at Johnson’s influential Tuesday lunch table after the president was favorably impressed by the CIA’s accurate analysis, produced before the 1967 Middle East war, about the impending outbreak and likely outcome of the war.  The connection between influence and doing one’s proper job well is just one reason, and not necessarily the most important reason, why doing that job well, and not letting it be corrupted by manipulation that serves some other purpose, is the overriding objective of those who work in the intelligence and security agencies.  Professional pride and a sense of responsibility certainly are reasons.  So is ambition and a desire for personal success.  For intelligence officers, making a correct call wins kudos; making a bad one means a black eye.

Accusations about leaking have been a customary part of rhetoric about a deep state, and such accusations lose sight of two relevant realities.  One is that the leaker is not necessarily to be found in whatever department or agency originated the document or information that was leaked.  Intelligence products are distributed widely throughout the government; a leak of intelligence or an intelligence judgment did not necessarily come out of an intelligence agency.  The other is that employees of intelligence agencies have more to fear for their jobs and careers, and thus more of a deterrent against any temptation to leak, than do most other government employees, given the special security scrutiny, including periodic polygraph examinations, to which they are subjected regarding their handling of classified information.

A traditional purveyor of the deep state notion for years has been a body of opinion, concentrated mainly on the political left, that holds that the national security bureaucracy and the intelligence community in particular distorts its judgments and hypes threats in order to sustain or increase their budgets.  Most recently, this idea has been applied to the intelligence judgments regarding the Russian interference in the U.S. election, with the specific idea being that this is a hyping of a Russian threat for budget-sustaining reasons.  Besides all of the reasons given above that this idea is invalid, the accusation also does not square with historical experience.  The intelligence community did not seem to be hyping, for example, any Russian (then Soviet) threat in the 1970s, when the main challenge to its judgments about Soviet strategic forces came from those who thought intelligence community estimates on that subject were not alarmist enough and got President Ford to establish a “Team B” to come up with a different estimate.  More generally, the ebb and flow of national security spending has had far less to do with the tone or details of intelligence community judgments than with other forces or events, such as what a terrorist group does (leading to the U.S. intervention in the Afghanistan War) or what intelligence community-hating neoconservatives do (leading to the Iraq War).  Besides, there is no clear and direct connection that should exist, any more than it does exist, between an intelligence judgment about any specific threat and the overall need for spending on intelligence.  It is less the level of threat from Moscow or any other place than it is the uncertainty of threats that implies a need for intelligence.  With threats that are clear enough for us to understand based on other sources of information, we don’t need intelligence.

Now the idea of a deep state is being promoted from an additional direction: President Trump and defenders.  Here we are seeing another application of Trump’s technique, which he learned at the feet of Roy Cohn, Joseph McCarthy’s sidekick, always to strike back at any source of embarrassing information and never to admit or apologize for anything.  Amid the battering the president and the administration have taken over the multifaceted issue of relations with the Russians, attacking the intelligence community as the core of a supposed deep state is just one more application of this technique.