Democracy is Sustained in Turkey—Sort Of 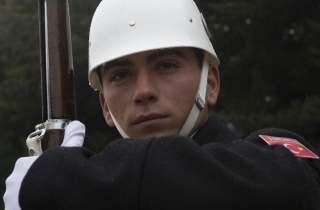 Before this week it had come to be broadly accepted conventional wisdom that the days of Turkish military coups were over. After a post-World War II history in which the military had taken over the government about once every ten years, in the last couple of decades the return to the barracks appeared to be final. One of the most successful and powerful civilian politicians that modern Turkey has produced, current president Recep Tayyip Erdogan, seemed to have stared down the generals enough to keep them out of politics.

Last night's coup attempt does not necessarily denote a reversal of this more recent pattern. The short-lived attempt appears to have failed. And unlike past coups, this unsuccessful one evidently was instigated not by the top brass but instead by some other not yet identified elements within the military.

The abortive coup does signal, however, fragility in Turkish democracy, in a couple of respects. One is the fact that any such coup was attempted at all. Another concerns probable reasons the attempt was made. Those reasons most likely are related to the autocratic tendencies that Erdogan has increasingly displayed in recent years. Maybe the plotters thought they were acting patriotically to protect Turkey against those tendencies. Maybe they were thinking in more self-centered fashion about how military officers might increasingly become targets of, and suffer consequences from, Erdogan's drive to concentrate more power in his own hands. Perhaps we will learn something more directly about the plotters' motives in the weeks ahead. But it is a good bet that they included some version of the above considerations, and perhaps also a desire to uphold the secularism of the Ataturk tradition against the Islamist inclinations of Erdogan's AK party.

Bearing in mind Erdogan's increasingly evident authoritarian streak, defeat of the coup is not entirely a victory for liberal democracy. It is likely that this episode will incline Erdogan to make that streak even bolder. That seems more in line with his habits than for him to conclude—which would be a reasonable conclusion—that he had overplayed his political hand and that this overplaying helped to stimulate the coup attempt. The implications for independence of the press and the judiciary in Turkey are not good.

Erdogan and his followers now can point to an actual instance of subversion and disloyalty, not just another of the fabricated ones that have been prominent in Turkey in recent years. There was the “Sledgehammer” case, in which 200 military officers were accused of a plot against the government before being acquitted last year. Even more prominent has been the “Ergenekon” case, involving another alleged plot involving many officers in the military and security establishment; three months ago an appeals court overturned the convictions in the case. Those alleged plots may have been mostly phony; this week's coup attempt was for real.

This whole episode holds nothing good for U.S. interests. At a minimum it will be a major distraction for the Turks away from security cooperation with the United States. There already has been an interruption in operations at Incirlik air base, which plays an important role in air operations over Syria. The distraction comes just when the Turkish government was shifting its priorities regarding the conflict in Syria in a direction that would make them more helpful partners in countering the extremist groups ISIS and al-Nusra. A more hard-boiled Erdogan in the wake of the coup attempt probably will be less inclined than before to take a constructive and forward-looking posture toward the Kurds, and this will be another complication in dealing with the war in northern Syria. Any harsh crackdown within Turkey, notwithstanding whatever short-term security benefits it buys, may stimulate violent radicalism and terrorism that can touch U.S. interests, reminiscent of last month's attack at the Istanbul airport.

Not surprisingly, Erdogan has wasted no time in blaming the attempted coup on his former allies and now arch-adversaries in the Gulenist movement. This involves the United States because Fethullah Gulen himself lives in exile in the Poconos. Erdogan's government earlier had accused the Gulenists of using their positions in the judiciary and prosecutors' offices to push the Ergenekon case. Expect the official line out of Ankara now to be that the Gulenists were trying to frame others for subversion while they themselves were the real subversives.

Lest there be any thought about Erdogan overlooking the U.S. connection: when the Turkish president made his first statement upon landing in Istanbul Saturday morning, he framed his accusation that Gulen had committed treason as a “message for Pennsylvania.”