Diplomatic Drawdown: Why America Has an Ineffective Department of State 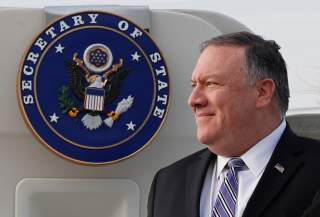 Earlier this year the Trump administration, while stoking an atmosphere of crisis with Iran, withdrew “nonemergency” personnel from the U.S. embassy in Baghdad and elsewhere in Iraq. It is unclear what specific development, if any, triggered this move. Insofar as the administration was contemplating a military attack on Iran and given the certainty that in response to any such attack Iran would strike back at U.S. interests, it may have been prudent to evacuate Americans from the neighboring state of Iraq. But skepticism is appropriate regarding this White House’s interpretation of security hazards in that part of the world. During violent disturbances last September in the southern Iraqi city of Basra, some mortar rounds striking in the neighborhood of the U.S. consulate were enough for National Security Advisor John Bolton to tell the Pentagon to draw up plans to attack Iran. The consulate was unharmed—the shells fell harmlessly in a vacant lot. It was the Iranian consulate in Basra that was set afire during the same disturbances.

Now it appears that the drawdown of U.S. diplomatic personnel in Iraq has in effect become permanent. To the extent the original evacuation was an adjunct to the administration’s saber-rattling against Iran, this latest development is not surprising. To return the evacuated diplomats back to Baghdad would mess up the messaging. It would be taken as a sign that tensions had eased even though the administration’s preferred theme continues to be “maximum pressure” against Iran, saber-rattling and all. This situation is one more example of how the administration’s Iran policy has pushed it into an unproductive cul-de-sac.

Extending the evacuation means wasting the talents of hastily relocated U.S. diplomats. It means wasting much of that big embassy compound that the United States constructed after its war of choice in Iraq. Most obviously, it means some U.S. business in Iraq will either not get done or not be done as well as it otherwise would have been.

Amid a fluid political and economic situation in an important Arab state, there is still much business for the U.S. government to do. If one listens to the Trump administration itself, then part of that business is to counter Iranian influence in Iraq. Operating an embassy with reduced staff is not an effective way to do that.

This situation is yet another of the many consequences of launching the war in 2003 with little thought to what would come after Saddam Hussein, beyond impossibly rosy expectations that we would have had a peaceful and liberal democratic Zurich-on-the-Tigris long before now. Much of what rocks Iraq today are the aftershocks of that U.S. invasion. These include—among many other things inside and outside Iraq—those disturbances in Basra, the rise and fall of the Islamic State, and the increased opportunities for Iranian influence.

The perpetuation of the diplomatic drawdown in Iraq comes alongside news that the Trump administration, as part of its anti-Iran messaging, is dispatching more troops to Saudi Arabia. These two developments together illustrate a persistent fallacy that is evident in, but by no means limited to, the Trump administration, which is that engagement in a region such as the Middle East is to be equated with a U.S. military presence or U.S. military operations. Too often in discussion back in Washington the alternative to military involvement is considered to be isolationism. In fact, the most effective alternative is more often a vigorous upholding of U.S. interests using all the instruments of statecraft, with diplomacy being first and foremost among them.

To quote a whimsical Marine Corps twist on an old FedEx advertising slogan, when something absolutely, positively has to be destroyed overnight, military force is the way to do it. But when U.S. interests involve constructing things and not just destroying them, other instruments of statecraft are likely to be more useful. Skillful, vigorous diplomacy is especially useful—indeed, essential—in upholding U.S. interests amid fluid, multidimensional political conflicts such as persist in Iraq today.

The Trump administration’s attitude involving military force was illustrated on Independence Day, when President Donald Trump’s idea of celebrating America’s strength was to park a couple of tanks next to the Lincoln Memorial. The administration’s degradation of diplomacy has appeared in multiple ways, including vacancies at the State Department, setting new records for nominating grievously unqualified people for important ambassadorial posts, and the disavowing of agreements carefully negotiated under previous administrations.

The empty positions at the U.S. embassy in Baghdad that are a byproduct of the administration’s anti-Iran campaign are not simply making the U.S. government’s business in Iraq more difficult. They also are emblematic of a larger problem.