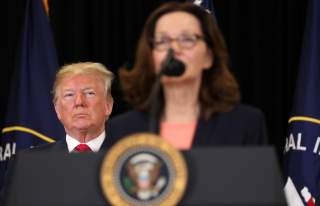 But it was highly improper for the head of an intelligence agency to express openly such support for policy positions, let alone domestic ones, some of which are quite partisan and controversial. Most CIA directors have stayed away from the state of the union address to avoid the pressure to express such support. John Brennan never attended while he held the post under Barack Obama, and Michael Hayden said he never attended the speech while heading the CIA because “it’s not my job.” The fact that a career officer such as Haspel, not just a political appointee and partisan figure such as her predecessor Pompeo, departed from that previous pattern makes the succumbing to Trump’s intimidation all the more apparent.

Those are the visible indications. We ought to worry even more about the effects of the intimidation that we cannot see but might be affecting the work of the intelligence agencies. It is the sort of worry that former deputy secretary of state William Burns expresses when he writes about the state of the foreign service, which has been subjected to at least as much abuse from Trump as the intelligence services have. “The risk,” writes Burns, “is that the temptation to go along to get along will become irresistible—that well-meaning officials will become unaware of their own complicity in feeding the callousness of this administration and distorting and undermining the principles that inspire public service in the first place.” For intelligence officers, going along to get along means shading intelligence judgments in the direction they know the administration wants.

A recent example where this kind of pressure and response may have come into play was the rocket attack on a military base in Iraq in December that killed an American contractor and wounded six other people. The Trump administration claims an Iranian-supported militia called Khataib Hezbollah was responsible. The administration’s subsequent escalation included the assassination of senior Iranian general Qasem Soleimani and brought the United States and Iran close to all-out war. The administration has never released evidence in support of its claim about who was responsible for the rocket attack. Subsequent press reporting indicates that Iraqi military and intelligence officials believe with good reason that Islamic State, not Khataib Hezbollah, conducted the attack.

We in the public do not have enough information to sort out these conflicting conclusions. But it is easy to reconstruct the pressures felt by U.S. analysts who had the intelligence task of assessing the nature and provenance of an unclaimed attack in a far-off place. Similar situations have arisen in the past. In August 1964, intelligence analysts charged with assessing ambiguous data about a nighttime encounter in the Gulf of Tonkin knew that the Johnson administration was eager to blame North Vietnam for an attack at sea. The analysts concluded—incorrectly—that such an attack had occurred. Analysts assessing the attack in Iraq have been working under an administration that they know is eager to blame Iran for every bit of mayhem in the Middle East. The conclusion that Khataib Hezbollah was responsible has not led—yet—to the consequence of a much larger war as happened in Vietnam but the risks are obvious.