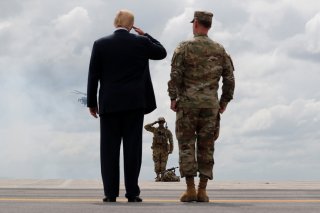 The Trump administration’s antipathy toward international organizations and international law is not news, but one of its latest moves along this line is an especially extreme example of that antipathy.

Escalating a campaign against the International Criminal Court (ICC) that it began earlier this year, the administration has now individually sanctioned Fatou Bensouda, the court’s chief prosecutor, and Phakiso Mochochoko, who helped to establish the court and is currently the director of its Jurisdiction, Complementarity, and Cooperation Division.

By placing these two senior officials on the Treasury Department’s “specially designated nationals” list—blocking their assets and prohibiting U.S. citizens from dealing with them—the administration is subjecting them to treatment designed for terrorists and drug traffickers. Or to put it differently, two of the international officials most responsible for holding war criminals to account are being treated as if they were war criminals themselves.

The ICC, which began operations in 2002 and is headquartered in the Netherlands, is the first and only permanent international court created to prosecute war crimes, genocide, crimes against humanity, and crimes of aggression. Most nations of the world—123 at last count—are members. Its jurisdiction is carefully limited in several respects, including the principle that it takes up a case only if the relevant state is unwilling or unable to do so.

American antagonism toward the ICC did not start with Donald Trump. There has been a longstanding aversion, especially among Republicans, to even the remote possibility that an international court might someday render judgment in a case in which the United States had a direct interest. That aversion was embodied in a law, appropriately nicknamed the Hague Invasion Act, which Jesse Helms and Tom DeLay sponsored and that President George W. Bush signed in 2002. It not only prohibits U.S. cooperation with the court but also authorizes the president to use “all means necessary and appropriate” to spring free any U.S. or allied persons being detained by the ICC.  But not even Helms and DeLay went so far as to treat ICC officials as if they were criminals.

The Trump administration has been vague about its objections to the court, beyond claiming that it incorporates a bias against the United States and Israel. The work of the ICC has not reflected such bias. Indeed, the overwhelming majority of prosecutions so far have been of Africans—so much so that African states have complained about a different sort of bias and about what they see as a double standard working against Africans.

Given the magnitude and breadth of lethal U.S. military operations during the two decades the ICC has been at work, it would be surprising if there were not—amid the honorable service of the great majority of men and women engaged in those operations—some dishonorable actions worth investigating and prosecuting. The administration position, as articulated in a speech by then-national security adviser John Bolton, has been that action by the ICC is “superfluous” because “domestic judicial systems already hold American citizens to the highest legal and ethical standards.”

International observers have been given reason to be skeptical about that assurance. A salient point in that regard is the Eddie Gallagher case. Gallagher, a Navy Seal, was court-martialed but then pardoned by Trump—putting a seal of approval from the top on Gallagher’s criminal behavior in Iraq.

The lack of investigations has prevented even the compilation of accurate data—let alone accountability and restitution. For 2019, United Nations numbers of civilian casualties from U.S. aerial bombing in Afghanistan are about five times as high as the numbers the Pentagon has compiled.

With regard to Israel, the need for an international investigation of possible war crimes—which the ICC would investigate along with possible war crimes by Palestinians—is reflected in a long history of civilian suffering. That history includes, for example, the 1982 massacre at the Sabra and Shatila refugee camps, conducted by Lebanese militias and facilitated by their Israeli military allies. It includes several rounds of fighting in the Gaza Strip with disproportionate civilian Palestinian casualties. It includes everyday abuses of civilians in the West Bank, which, insofar as they involve military occupation of conquered territory, may constitute war crimes.

The U.S. administration’s behavior toward the ICC is not the action of someone seeking objective treatment and a fair day in court for any of its nationals who might find themselves there. It instead is the behavior of someone seeking the very kind of double standard mentioned in the African accusations against the ICC. It is a seeking not of accountability but of a whitewash of possible misconduct.

The administration’s posture leads to specific harm to the United States. It is one more act of self-isolation. Only the Netanyahu government in Israel has had anything favorable to say about the sanctioning of the ICC officials. All the other international reaction has been condemnatory.

The administration’s posture, coupled with its other actions such as the pardoning of Gallagher, promote resentment against the United States, which gets portrayed as a state that not only condones crimes of war but wallows in them. This provides propaganda fodder for U.S. foes. The Washington Post’s George notes that “civilian deaths at the hands of U.S. forces have been a powerful rallying cry for anti-American and anti-Afghan government sentiment.” Moreover, “weakened U.S. accountability mechanisms only gave that propaganda greater traction, undercutting the Afghan government ahead of formal talks with the militants.”

The more that the U.S. administration resists accountability, through either international or national mechanisms, for possible war crimes, the less surprised it should be when others commit such crimes against Americans or friends of the United States.

Not least important is the fundamental need to recognize right and wrong when innocent humans suffer, and to uphold the principles of morality that underlie the international law for which the current U.S. administration has shown so much disdain.