Don't Try to Imitate the Russians in Syria 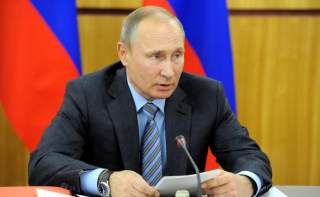 Among the latest in the Washington Post editorial page's unrelenting drumbeat of criticism on Syria—which often does not make clear exactly what the United States should be doing there, except that whatever it does should involve more military force than it is using now—is a signed column by deputy editorial page editor Jackson Diehl, who says President Obama ought to emulate Vladimir Putin. Diehl says that events in Syria since Russia directly intervened militarily have demonstrated that Mr. Obama was wrong in refraining from a comparable intervention. “Putin has proved,” writes Diehl,”that the concept Obama rejected—that a limited use of force could change the political outcome, without large costs—was right all along.”

Some of the biggest problems in Diehl's argument are ones that he and his colleagues have displayed all along in beating their drum. Among these is an incredibly rigid and oversimplified view of what is at stake in Syria. The apparent assumption is that the only thing that should matter to the United States is whether pro-regime or anti-regime players are forcefully gaining an advantage over the other. This complex and multidimensional civil war is treated as primitively as a schoolyard contest in toughness. “The United States is far stronger than Putin's Russia,” Diehl writes. “U.S. fecklessness is a choice.”

Diehl's assumption of a zero-sum game is as absolute as the most Manichean views of U.S.-Soviet competition ever were during the Cold War. Putin intervened in Syria, says Diehl, “and it has made Barack Obama the loser.” The result is “a victory for Russia, Iran and the Assad regime, at the expense of the United States and its Arab, Israeli and Turkish friends.” Such a statement masks not only the non-zero-sum nature of interests that cross the divide that Diehl postulates but also the significant differences in interests among the players on each side of that divide.

The incorrect zero-summing extends from the military to the diplomatic. Because the United States has not thrown its military weight around, argues Diehl, the recent cease-fire agreement “offered Putin everything he sought in Syria.” Diehl bemoans that we are “satisfying Putin's longstanding demand that the West join him in fighting 'terrorists' rather than Assad.” And so we should be against fighting terrorists, just because Putin is in favor of it? That seems to be the argument. Certainly serious questions should be raised about how effective U.S. military force can be against the Islamist extremist part of the Syrian situation (and some of the results of military operations the United States already is conducting against ISIS in Syria underscore those questions). But there really are terrorists in Syria, with or without the quotation marks, and a more plausible case can be made that they ought to be more of a concern for the United States than engaging in a shoving match with Putin that is an extension of Assad's fight against his domestic opponents.

Nothing in Diehl's column considers exactly where U.S. interests do and do not lie in Syria. They do not lie with any particular political coloration of a future regime in Damascus. They do not rest on overthrowing the Assads; somehow U.S. interests have survived even though the Assads, father and son, have been in power for 46 years. Violent extremism of the sort that also can appear in the West has more to do with U.S. interests, and on that subject there is more convergence with Russian interests in Syria than there is conflict with them.

As for Diehl's main argument that Russia has demonstrated a successful use of military force that the United States should have used but fecklessly did not, there are two fundamental problems with that argument. One is that it overlooks a large asymmetry between what Russia set out to do with its military intervention and what the United States would be doing if it tried to follow Diehl's advice. The Russian military's mission was to shore up a well-established incumbent regime—the one that's been in power for 46 years. If the United States were to try something similar on the other side, it would be “shoring up” (not really an applicable term) a fractionated, unproven, quarrelsome, extremist-infested hodge-podge of opposition groups.

Whenever the ineffectiveness of the Syrian opposition gets mentioned, pro-interventionists such as Diehl resort to the counterfactual assertion (with all of the logical flaws that such argumentation entails) that if only the Obama administration had acted more forcefully earlier, an effective and moderate Syrian opposition would have prevailed. But interventionists never can point to evidence in the political archeology indicating this would have been the case. The moderate, effective opposition fighter is the Syrian version of Piltdown Man, a presumed creature who never really existed, at least not in the numbers and with the organization that would have made a difference.

The other fundamental problem in the Putin-proved-what-could-be-done argument is that by defining the policy problem in terms of who gets to rule in Damascus and who wins a U.S.-Russian shoving match, this overlooks the more important variable of the scope and intensity of the war. Diehl does mention President Obama's observation that “U.S. intervention would only worsen the war, encourage extremism and exacerbate the humanitarian crisis,” but then Diehl blows off the observation by saying, “All those bad things happened in the absence of American action.” Such a dismissal seems to assume that bad things can't get even worse, and that a larger U.S. military intervention is more likely to make them better than worse. No evidence is offered to suggest that those assumptions are true; much recent history in the region suggests that they are false.

There is no discernible route to an alternative political outcome that would please most of the Syrian opposition (if the opposition could ever agree on such) and displease the Russians without going through much more war, more chaos, more extremism, and more suffering. This would be true whether or not Bashar al-Assad were to depart the scene tomorrow, and it would be true whether or not the United States weighed in heavily with military force.

The conspicuous and current examples of Iraq and Libya are not merely hang-ups of feckless U.S. leaders. They are glaring lessons in the implications of regime change that are highly applicable to Syria. In Libya little effort was made after helping to overthrow the previous leader, and the country has been a violent mess. In Iraq the United States made enormous effort, including the expenditure of thousands of American lives, and still left a mess, including a lack of political accommodation among contending Iraqi forces and the continuation of a civil war that was still going at a substantial clip when Barack Obama took office in 2009.