Durham Has Proven to Be the Big Hoax Himself 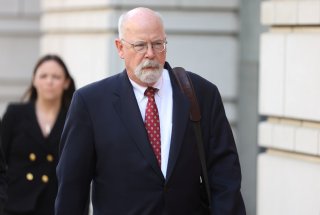 The real politically motivated investigation is Durham’s own. Then-Attorney General William Barr—back before he broke with Trump—assigned Durham this task not because of any improper motivations in the FBI but instead as part of the effort by Trump to discredit anyone or anything calling attention to the Russian election interference on his behalf. Promoting the notion that the FBI’s work on this subject was a “political witch hunt” was—and for Trump, still is—the chief rhetorical line used in the effort to discredit that work.

Despite the political motivation in setting up Durham’s investigation, Durham and his staff are professionals who cannot produce nonexistent evidence out of thin air. The sole bit of impropriety by any government official that they were able to come up with was the inconsequential addition by a former FBI lawyer of three (truthful) words to an email that was part of the supporting documentation for a surveillance application. Beyond that, Durham has been reduced to prosecuting not government officials but instead two individuals accused of lying to the FBI.

That these two indictments have nothing to do with any official malfeasance—and instead indicate that the law enforcement elements involved, including especially the FBI, were on the ball in detecting what may have been even minor discrepancies in what their interviewees told them—has not stopped pro-Trump spinmeisters from trying to wring something from thin air. Anything that involves accusations of lying and also involves the FBI’s investigation of the Russian interference can be made part of an intentionally confusing rhetorical soup that, however illogically, may help keep alive in some minds the “political witch hunt” notion.

The first of Durham’s two prosecutions of private individuals, of a Washington lawyer named Michael Sussmann, ended in May with Sussmann’s acquittal. This verdict was hardly surprising, given the thinness of the prosecution case—which in turn was almost certainly a reflection of the straining by Durham and his staff to come up with something prosecutable after failing to find any witch hunts.

The trial of the other person being prosecuted—a Russian U.S.-resident named Igor Danchenko—began last week and is expected to go to the jury this week. The prosecution case against Danchenko appears to be as thin as the one against Sussmann. It would be hard to understate the significance of what Danchenko is accused of. The charges hinge on such nuances as whether Danchenko lied to the bureau when he said he did not “talk” with someone with whom he communicated not orally but by email, or when he said he “believed” the person on the other end of a phone call to be someone it may not have turned out to be. Danchenko’s defense attorneys argue that he should not be punished for giving vague answers to vaguely worded questions.

In any event, none of this has anything to do with the reasons for the FBI’s investigations or the conduct of those investigations, much less the substance of the Russian election interference and the responses to it.

The Danchenko trial has not been going well for Durham. The judge, an appointee of George W. Bush, came close to dismissing the case at the outset, saying that it was “an extremely close call” whether Danchenko’s statements constituted prosecutable offenses. The judge disallowed Durham’s attempt to introduce material about the now-infamous “Steele dossier,” which would have provided fodder for the spinmeisters but was not germane to the questions in Danchenko’s trial. A court observer reported that Durham appeared “visibly frustrated” by testimony from an FBI counterintelligence officer about how Danchenko had been for years a valuable paid informant and how the disclosure of his identity from a document that the Trump Justice Department had provided to Senator Lindsey Graham (R-SC) was a blow to national security.

The verdict in Sussmann’s trial was meaningless regarding the supposed basis for Durham’s appointment and the reasons for the FBI investigating the election interference and matters related to it. The verdict in Danchenko’s trial, whichever way it goes, will be just as irrelevant.

A grand jury that Durham had been using has expired, and it is generally expected that the current trial will be the last appearance in court for this special counsel. The cost of his politically motivated appointment includes, at a minimum, a waste of government resources.

The cost also has included keeping alive—through the mere existence of the Durham investigation, regardless of its failure to find what it supposedly was looking for—the myth about a “political witch hunt.” This in turn detracts from the necessary attention to, and understanding of, Russia’s major effort to influence a U.S. election, as documented by the intelligence community, the Mueller report, and the Senate Select Committee on Intelligence.

All this is now a matter of public record. It does not take the results of an FBI investigation to know this. But knowing it certainly shows that the FBI investigation of this threat to American democracy was amply justified.