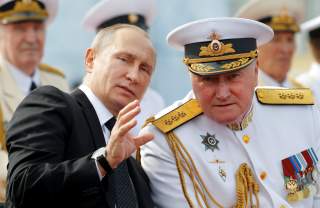 Donald Trump seems eager to learn at the knee of Vladimir Putin.  During his Asian trip, Trump expressed his willingness to believe Putin’s denials about Russian interference in last year’s U.S. election, rather than the judgment of U.S. security agencies that there was indeed such interference.  He later only grudgingly backtracked, with the backtracking accompanied by a fusillade of invective against former U.S. intelligence and security chiefs who had spoken out on the matter.  Underlying Trump’s attitude toward Putin is authoritarian envy, with Trump wishing he could dictate happenings in the U.S. political system as much as Putin does in the Russian one.

Meanwhile, many commentators, who include critics of Mr. Trump at least as much as his supporters, have lamented what they see as an expansion of Russian influence and a contraction of U.S. influence.  The principal focus of the criticism has been the Middle East.  Many of the critics had been just as critical of Barack Obama for not being as forceful and forward-leaning in the region as they would have liked.

Both Trump and many of the critics, despite their different perspectives about Russia, appear to share a belief that the key to expanding U.S. influence is to identify your friends, to stick with them through thick and thin, and to stick it to your adversaries.  An oft-made contrast has been between what critics describe as resolute Russian support for the Assad regime in Syria and what the critics regard as too-weak U.S. support for Syrian opposition groups or anyone else they consider to be deserving U.S. clients.  Certainly Trump has adhered to a rigid distinction between those countries defined as friends and those defined as enemies, as illustrated especially by his side-taking in the Persian Gulf.

But to match Russian influence—or indeed for any enhancement of U.S. influence, regardless of whether one is keeping score vis-à-vis Russia—one should learn from Russia’s diplomacy in a region such as the Middle East.  That diplomacy is not based primarily on taking sides.  Furnishing whatever support Assad wants is not the defining characteristic of Russia’s policy in the region.  Instead, Russian policy features a willingness to engage with every significant player, on each side of the region’s multiple conflicts.  Putin frequently pursues such engagement at the summit level in meetings not just with clients such as Syria but also with Israel, Turkey, Saudi Arabia, and Iran.

In doing so, Putin is practicing foreign policy realism, which has no place for self-constraining side-taking in which one engages only with those we like and not with those we dislike.  Realism does not divide the world into good and evil.  It instead perceives that there are both conflicts of interest and parallel interests with just about everyone.

By engaging with just about everyone, the realist maximizes the ability to pursue one’s own interests wherever and whenever there is an opportunity to do so, taking advantage of any parallelism, even a modest amount, with the interests of other countries.  Such engagement also maximizes opportunities for relations with one country to provide leverage over another country.  As Richard Nixon and Henry Kissinger demonstrated when practicing great power triangular diplomacy in the early 1970s, having better relations with each of two countries than the two have with each other means having the most influence of all three.  Rigid side-taking sacrifices all of these influence-expanding opportunities.

Putin’s dealings with Iran, where he was earlier this month (in a trilateral meeting that also included the president of Azerbaijan) illustrate his approach.  There are ample conflicts of interest between Russia and Iran, on top of historical animosity left over from repeated clashes between the Russian and Persian empires.  But there also are significant opportunities to work together on the basis of parallel interests.  The meeting featured the signing of deals on energy development, talks about Syria (where Russia and Iran have supported the same side in the civil war but also are in competition for post-war influence) and discussions of the future of the Iran nuclear agreement, with such discussions underscoring the self-isolation of the United States under the Trump administration.

Multilateral diplomacy is another variety of engagement with everyone rather than a dividing of the world into good guys and bad guys.  Russia—and China—have effectively exploited multilateral fora, while Trump has accelerated a decline of U.S. influence by disdaining anything multilateral.

The overall lesson for Donald Trump about foreign policy and diplomacy is: do as Vladimir Putin does, not as he says.