Entertaining Our Way into Falsehoods 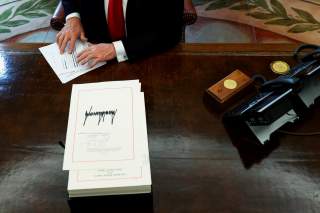 Long after Donald Trump leaves office, analysts will continue to discuss the roots of his presidency’s excesses and outrages.  They will offer explanations about larger phenomena in politics and society that go beyond Trump himself and that helped to make possible the damage he has inflicted on the republic.  Some of those explanations will focus on subsets of the population, such as his electoral base or the Republican Party.  Other explanations, just as appropriately, will point to still larger trends, attitudes, or developments that involve American society as a whole.

Such larger-scale explanations are applicable to one of the biggest of Trump’s excesses, which is his utter disdain for truth.  He constantly dispenses fiction as if it were fact.  There have been earlier indications that Trump is, in this respect, a culmination of a phenomenon that began before him.  There was, for example, the aide (generally thought to be Karl Rove) in President George W. Bush’s administration who brushed aside the “reality-based community” and said “we create our own reality”.  There also is the whole phenomenon of fake news (real fake news, that is, not valid reporting that Donald Trump happens to find inconvenient), which began before Trump entered the White House.

The dependence of fake news for its impact on rapid dissemination of falsehoods on the internet demonstrates how technological advances have much to do with the problem.  Robert Kaplan writes, “It is impossible to imagine Trump and his repeated big lies that go viral except in the digital-video age.”  The technological possibilities for such mischief continue to expand.  Kevin Roose reports in The New York Times on a program called FakeApp that generates phony but convincing videos, such as ones that graft the head of a political figure or other celebrity on the body of a pornographic performer.

Technology certainly has enlarged the toolbox for promoting falsehoods, but it is not essential.  All that is required for fostering mass misbelief is something that stimulates people’s imagination about what has gone on out of their sight behind closed doors.  One of the most pernicious art forms in this regard, even though it enjoys legitimacy and respect among critics and the public, is the motion picture or television drama that tells a fictionalized story involving real people, institutions, and events.  This art form is the ultimate blending of fact and fiction, in which scriptwriters can make the blending as seamless as the blending of pixels by a computer program such as FakeApp.  Thus the people—maybe even a majority of Americans—come to believe the fiction as if it were fact.  The fiction can have political or policy consequences.

In some respects this problem has been around as long as show business has written and staged historical dramas.  Some of my first exposure to events of the late Roman Republic was from reading William Shakespeare’s Julius Caesar in high school.  It was only later that I read real histories of the subject.  But modern film and television can provide a much more realistic-looking portrayal of historical events than could actors on the stage of the Globe Theater.  Some of the screens on which viewers watch the dramas are the same screens to which they turn for news and information and what they consider to be objective portrayals of reality.  People are less likely to spot a turn in a drama from fact to fiction than to spot the duplicity of a fake video that purports to show a well-known political figure performing an obscene act.  Modern film producers and cable channels have more ways to convey an impression of reality than did Shakespeare. But like him, their objective is to entertain audiences, not to inform them or to present to them an accurate portrayal of reality.

A recent example of this phenomenon is a critically praised Hulu television mini-series that bears the same title as, and is supposed to be based on, Lawrence Wright’s book The Looming Tower, which is about the run-up to the 9/11 terrorist attacks.  Wright’s book qualified as nonfiction, but the transfer to the screen involves not only the emphasis for dramatic effect of some aspects of the story over others but also a generous insertion of outright fiction.  Dialogue is devised that was never spoken, arguments are staged that were never argued, and scenes are constructed that never took place.

But heck, it’s a drama.  Washington Post television critic Hank Stuever observes that the show’s “disclaimer about fudging some facts to smooth the story out” makes it difficult for the viewer to determine what is factual and what is not.  The great majority of viewers no doubt will follow Stuever’s advice: “Maybe it’s more watchable if you let yourself get lost in it and pay closer attention to its themes rather than its footnotes.”  Most viewers will take the series as a whole to be factual, even if it isn't.

Compelling drama needs a satisfying and easy-to-understand theme, and the creators of this series settled on the theme of bureaucratic infighting between government agencies.  A sponsor’s promotional announcement for the series, repeatedly aired on National Public Radio, says that the series is about how conflict between the FBI and CIA “may have set a path for the 9/11 tragedy”.  So even NPR listeners (a demographic, by the way, in which Trump supporters do not tend to predominate) who never watch the series will have drummed into their ears the notion that what is most important about the lead-up to 9/11 is that squabbling between these two government agencies let the attack happen.

Differences and disconnects between federal agencies have long been a popular theme, including in a forum that sometimes functions as another form of entertainment: congressional hearings.  The 9/11 Commission, which played to the crowd in many respects, also seized on that theme, giving the country a cumbersome reorganization scheme that created even more bureaucratic dividing lines than before and left Americans no safer than before.  What makes the theme of bureaucratic divisions a popular response to such tragedies—that it posits a supposedly fixable problem that, once fixed, will prevent a recurrence of the tragedy—is related to why the same theme makes for commercially successful drama.  The producers of a drama, even when the main subject is a tragedy, want their audience to feel good after watching, partly by having the viewers easily understand what the problem supposedly was and by depicting a problem that is consistent with public preconceptions about what is wrong with the world.

The resulting damage to public understanding of real problems in the real world is substantial.  Spats between federal agencies did not give us 9/11.  Differences in viewpoints of the FBI and CIA there certainly have been—and still are, given the different missions of those agencies.  But top management in both organizations clearly recognized, years before 9/11, the importance to counterterrorism of those agencies working closely together and took significant measures, such as cross-assignments of personnel, in the interest of working closely together.

Besides the inaccurate picture a fictionalized drama offers on this one facet of counterterrorism, the dramatic emphasis on it obscures all the other facets that the public needs to understand.  These include the capabilities and limits of all the instruments of counterterrorism, including ones such as diplomacy and military force that are not primarily the responsibilities of either the FBI or CIA.  They include everything else that U.S. policy affects and that in turn affects the likelihood that disgruntled foreigners will attempt terrorist attacks against the United States.  Also obscured is the question of how much terrorism can be prevented at all.

Some obvious parallels arise between the misconceptions that a series such as this conveys and the ways in which Donald Trump exploits false and misleading themes.  There is the bashing of the FBI.  There is the notion of a deep state that supposedly is looking out mainly for its own narrow interests—a notion Trump supporters promote to try to discredit any investigative findings that will be embarrassing or politically damaging to the president.  And there is Trump’s general dissing or disregarding of the intelligence community.

A more fundamental parallel with Trump concerns how what entertains us determines which fictions displace fact in public perceptions.  Trump was a performer before he was a politician.  He was a television star in The Apprentice before he ran for office.  That show cultivated an image of Trump as a decisive manager, but the reality was that he didn't even make most of the decisions about who got fired.  He later would win votes from people who thought he had business skills that would translate into effective management of government.  But instead there is chaos in Trump’s own staff in the White House, and this time he does not have NBC to bail him out.

Trump still entertains us.  Say whatever else you want about the man, but he certainly knows how to hold our attention.  His entertainment value is one reason—in addition, of course, to his being the president of the United States—that we fail to follow the best advice for dealing with a bully, which is to ignore what he says.