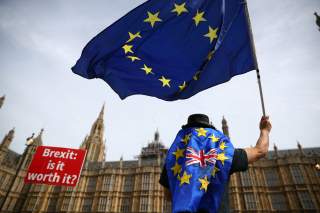 One of several specters hanging over this week’s G7 meeting is the prospect that in a little more than two months the United Kingdom will crash out of the European Union. Such a “no-deal Brexit” will help no one (other than perhaps leaders in Russia or China who welcome any division and weakness in the West) and hurt many, especially in Britain itself, where government experts recognize in private what a calamity such an exit would be for the British economy. British prime minister and lead Brexiteer Boris Johnson is facing two impossible tasks that are in large part of his own making. One is to persuade European leaders to renegotiate the deal they reached with Johnson’s predecessor—a renegotiation those leaders have little or no incentive to undertake. The other will be to make good on the Brexiteers’ promises about benefits to the British public, promises that were far-fetched even with a negotiated exit and will be all the more so under the no-deal scenario.

Johnson’s one prominent source of outside support is President Donald Trump, who has been cheering on Johnson all the way to the miserable dead end of Brexit.

For those most interested in U.S. foreign policy, now is a good time to recall what the whole project of European integration means for broader peace and prosperity—and for U.S. interests. As multiple U.S. administrations of both parties, before Trump, have repeatedly made clear, that project is very much in U.S. interests, as is Britain’s participation in it.

U.S. recognition of the value of the European integration project goes back to the project’s earliest days, when the question of British membership already was a key issue. In 1950, as negotiations to accomplish the first step in the project—creation of the European Coal and Steel Community—were about to begin, Britain’s Labour government stood aloof. President Harry Truman’s secretary of state, Dean Acheson, later wrote in his memoir that this “was not the last clear chance for Britain to enter Europe, but it was the first wrong choice—as wrong as General de Gaulle’s tragic rejection of the penitent in 1963.” (The latter part of Acheson’s comment referred to French president Charles de Gaulle’s vetoing of a later British application to join what was then the European Economic Community. After de Gaulle left office, Britain finally did join in 1972.)

When Dwight Eisenhower succeeded Truman in 1953, U.S. support for the European project remained strong. By late 1953 a focus of discussion was the European Defense Community (EDC), a proposed integrated military force that would be shelved the following year when a newly installed French government withdrew its support for the proposal—with the French decision heavily influenced by an earlier British decision not to participate. In December 1953, U.S. Secretary of State John Foster Dulles, to emphasize how much importance the United States placed on the proposed EDC, sternly warned the North Atlantic Council that if this part of the European project did not materialize, the United States would have to conduct an “agonizing reappraisal” of its security commitment to Western Europe.

The first and greatest objective of the integration project, as envisioned by its founding fathers such as the French statesmen Robert Schuman and Jean Monnet, was to banish to the past anything like the two world wars of the first half of the twentieth century. In this, the project has succeeded magnificently. War between the likes of France and Germany is now unthinkable, marking an amazing transformation from the carnage and hatred of the immediately preceding decades. The United States, which twice had to enter the carnage, as the New World coming to the rescue of the Old World, ought to be as appreciative of this achievement as anyone else.

The prevention of another European war is by no means the only achievement of the integration project that assists the United States. As a bastion of liberal democracy, a unified Europe is a more beneficial player on the larger world stage than members of a disunited Europe would be. And in a globalized world economy, the benefits of integration in Europe have spillover effects that benefit others, including in the United States.

British participation in the project has consistently been in U.S. interests. It is a force multiplier to, rather than a replacement for, a U.S.-UK special relationship. Britain is more useful and important to the United States when it has a foot on both sides of the Atlantic and is a major player in European affairs than if it is just a post-imperial island off the coast of Normandy.

Obviously Trump sees the relationship differently. Perhaps some thinking in the White House, and in the mind of John Bolton when he recently visited London, sees a weakened and isolated post-Brexit Britain, more dependent on U.S. goodwill as a result, as more easily bent to the Trump administration’s wishes on issues in the Middle East and elsewhere. But all of this is just a variant on the Trumpian notions that multilateral is always worse than bilateral, and that international relationships are mostly zero-sum with a winner and a loser. Experience already has shown how mistaken and ineffective those notions are when applied to, for example, trade and economic issues involving China.

To the extent Johnson becomes Trump’s poodle and is seen to have become that, he will be all the more ineffective in relieving what otherwise is division within the West or isolation of the United States for following policies that are controversial or simply bad. There already are some hints of this regarding maritime security in the Persian Gulf.

Trump’s posture toward Brexit is one more manifestation of his basing U.S. policy not on careful calculation of U.S. interests but instead on transnational identification with other leaders who share xenophobic and populist or faux-populist tendencies. His kinship with Johnson extends to these qualities as well as to demagogic success, disregard for truth, and strange hair. It is not just a campaign slogan for Labour Party Leader Jeremy Corbyn to describe Johnson as “Britain’s Trump”.

Americans and their government cannot and should not now try to interfere in the political and constitutional mess that the Brexit issue has become for Britain. They can only hope that the mess plays out in the weeks ahead in a way that irreparable breaks do not occur before better thinking prevails, perhaps in the form of a second referendum.