Exceptionalism and the Limited Scope of Indispensability 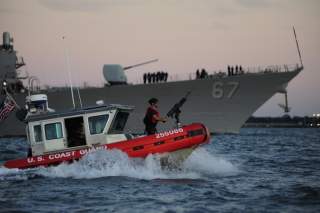 Hillary Clinton gave a speech this week in which American exceptionalism was a major theme. She obviously chose that theme partly because it would appeal to her specific audience (an American Legion convention) and partly because it would enable her to criticize Donald Trump, who has said he doesn't like the term “American exceptionalism” because people in other countries don't like to hear it and feel insulted by it. Trump is right about that, although in many other respects he shows he doesn't have qualms about insulting people in other countries, including the country he briefly visited on Wednesday and has described as a nation of rapists and drug dealers.

America is indeed exceptional in some obvious respects, and there is nothing wrong with Americans reminding themselves of that, as long as they do not stick the concept in the face of non-Americans. It is some of the corollaries that tend to flow in an unthinking fashion from the concept of American exceptionalism that have caused problems. Several such tendencies in American exceptionalist thinking have contributed to bad policy.

One particular common corollary of the notion of exceptionalism that Clinton emphasized in her speech was that of indispensability. “We are the indispensable nation,” she said. “So no matter how hard it gets, no matter how great the challenge, America must lead.” As with exceptionalism itself, it certainly is true that the United States is, or at least has been, indispensable in some respects. An example would be the role of the U.S. dollar as a reserve currency and of U.S. government debt as an instrument in international finance. The problems come from the tendency—which is implicit in much of the wording of Clinton's speech—to consider the United States and U.S. leadership as indispensable in addressing all significant problems abroad. But not all problems abroad are U.S. problems, not all such problems are solvable, what solutions there are do not all come from the United States, and in some problems U.S. involvement or leadership is instead counterproductive.

A related and common tendency is to invoke the physical metaphor of a vacuum. “When America fails to lead,” said Clinton, “we leave a vacuum that either causes chaos or other countries or networks rush in to fill the void.” The vacuum metaphor has several problems when applied to foreign policy. It understates or overlooks altogether whatever was present before any outsiders rushed in. It incorrectly assumes a zero-sum or mutual exclusion relationship between the supposedly indispensable superpower and any other players who may be involved.

Clinton talked about values and about how American exceptionalism includes the idea of “America’s unique and unparalleled ability to be a force for peace and progress, a champion for freedom and opportunity.” The overlooked question in this kind of rhetoric concerns the conditions in which other nations are, or are not, receptive to the freedom and opportunity being championed. Herewith is an inherent internal tension in American exceptionalist thinking. The more exceptional are the conditions in which American values arose, the less transferable are those values to others. And that is a problem with the corollaries about indispensability and American leadership in addressing problems hither and yon.

Clinton did invoke Lincoln's concept of the last best hope of Earth and Reagan's image of a shining city on a hill. The idea of making the American republic the best, and the best example, it can possibly be—so that even a Donald Trump can't wreck it—is a better way to implement ideas of exceptionalism than to act like an indispensable vacuum-filler.

: "ATLANTIC OCEAN--The Coast Guard Cutter Forward conducts a 76mm gun shoot, held to train crew members how to combat specific targets, while underway during an Africa Partnership Station (APS) mission May 31, 2011. The Forward is the primary operational platform for the APS initiative in 2011, and will be working with our African partner nations to strengthen global maritime partnerships through operations and other collaborative activities, including law enforcement, seamanship, search and rescue operations, environmental stewardship, maritime awareness, medical readiness, and navigation. U.S. Coast Guard photo by Fireman Mark Krebs."