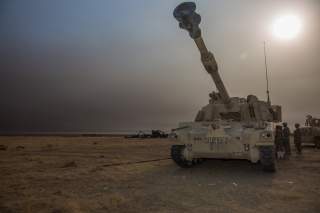 The so-called Islamic State or ISIS is on the decline, and its “caliphate” on the ground in Iraq and Syria is shrinking to extinction. In Syria, the group has lost about a quarter of the territory it used to control, including its access to the Turkish border, and recapture of its de facto capital in Raqqa is coming into sight. In Iraq, ISIS has lost half the territory it once had, and a coalition of forces is knocking on the door of the group’s biggest prize, the city of Mosul.

We should reflect on the arguments we were hearing not very long ago that more force than the Obama administration was using would be needed to defeat the ISIS menace. ISIS was the main focus of the “do more in Syria” cries before the cries shifted more to the Syrian regime and its warfighting methods. Typical was an op ed by James Jeffrey of the Washington Institute for Near East Policy, written not quite one year ago, that called for sending U.S. ground troops into the fight against ISIS and declared, “It’s obvious that defeat of the Islamic State is not going to happen absent a first-class, mobile ground force being launched to mate with overwhelming air power.” Well, ISIS is being defeated without such a U.S. ground force. In fact, the defeating is perhaps going too fast, in that the main question is not whether such defeat is happening but rather how unstable will be the situation left in the wake of an extinguished ISIS mini-state. The smash-and-run approach that was being advocated by many of those who argued that the Obama administration was not applying enough military force to the problem (Jeffrey advertised his proposal as a “short, crisp” operation that would not be anything like a prolonged counterinsurgency) would be even less likely to yield a favorable answer to that question.

This is one of those occasions in which it is easy to forget the errors of policy recommendations that were never adopted, because without being put into effect the errors in analysis fortunately never get reflected in actual costs and fiascos. But the analysis can be just as bad as with ill-founded policy recommendations that are put into effect. We ought to take note of that, and to apply the relevant lessons in evaluating similar policy debates now and in the future.

On one hand, U.S. military escalation already is proving to be unnecessary to squeeze the ISIS mini-state out of existence. But on the other hand, even an escalated U.S. military effort would be insufficient to make ISIS-fomented armed resistance in Syria and Iraq go away, mini-state or no mini-state. As Seth Jones explains in an analysis based on experience with prior resistance groups, an ISIS-led insurgency is likely to ensue. So much for short and crisp with any escalated U.S. military intervention. If “mission accomplished” is declared after Mosul and Raqqa fall, whoever is involved in the fight will be facing what U.S. troops faced earlier in Iraq after the fall of Saddam Hussein. Unlike what smash-and-run proponents might suggest, going after ISIS is not a game of capture-the-flag or checkmating a king.

Another reality that will be faced after the mini-state is extinguished concerns international terrorism. Anti-Western terrorism associated with ISIS was another of the alarm buttons, along with ISIS’s rapid territorial gains in 2014, that was connected to the cries to do more with military force and to do it fast. Jeffrey’s piece was again typical in beginning by stating that the “horrific Paris attacks” and the bombing of a Russian airliner over Egypt “demand an answer to this question: When will the United States realize that it urgently needs to use real military force to defeat the Islamic State threat?” We should note first that despite such supposed urgency, in the ensuing year the West has not been assaulted with any paralyzing wave of ISIS-fomented terrorism, even though ISIS and its caliphate have not yet been extinguished.

Even after the caliphate is extinguished, however, there still will be terrorism in the West conducted in the name of ISIS, even if not paralyzing. For ISIS to look more and more like a loser rather than a winner will make it less of a lodestar for radicals in the West, but the terrorism that any such radicals conduct has never depended on control of a piece of real estate in the Middle East. After Mosul and Raqqa have fallen and Western leaders can declare, with some good reason, that the ISIS caliphate is no more, some bombings and shooting sprees will still occur in the West and will be labeled, at least on the basis of a perpetrator’s claim, as “ISIS attacks.” How will Americans and American politicians react to that?

Based on experience, much of the reaction will consist of an urge to use military force, amid continuing insurgency in Iraq and Syria, to find and destroy a command center that is thought to organize and order such terrorism. But although some individual extremist leaders will be killed, no such center will be found. It will assume a place in U.S. military history comparable to the "Bamboo Pentagon" that was assumed to exist somewhere in Cambodia and to control all of the Communist insurgency in South Vietnam. Military operations aimed at the chimerical terrorist command center identified with ISIS will have the counterproductive effect of stimulating more of the very kind of anti-Western terrorism that the operations were intended to prevent.

If we are fortunate, maybe instead a more accurate lesson will be drawn from the disjunction between a destroyed ISIS caliphate and continued international terrorism in ISIS’s name. The lesson would be that groups such as ISIS are less prime movers of terrorism and more a name and a cause to which radicals attach themselves to believe that they are acting on behalf of something larger than themselves and their own demons and grievances. A corollary is that the likelihood of Americans becoming victims of this brand of terrorism has less to do with battle lines on a Middle Eastern map than with whether our own actions generate and sustain such grievances.