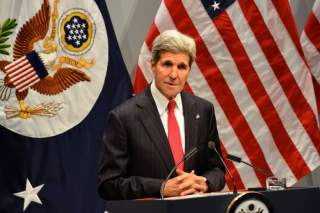 The recently extended nuclear negotiations with Iran have had to compete for front-page attention with acute crises elsewhere. The agreement to extend both the negotiations and the interim commitments associated with them for another four months has nonetheless provoked comments from the usual quarters, including those who have never wanted any agreement with Iran and continue to try to sabotage the negotiations. Here are some key facts to bear in mind about the extension itself:

The extension makes possible a continuation of major negotiating progress. The progress to date has been remarkable. Few would have predicted it even a year ago. As Secretary Kerry commented in a statement on Friday, it was less than a year ago that a U.S. secretary of state and an Iranian foreign minister met for the first time in more than three decades. The key events making this possible were the advent of a new Iranian president with a much different orientation from that of his predecessor, and the willingness of the United States and its negotiating partners to seize this opportunity. The negotiations have gone from a standing start with no communication to an important interim agreement and a common text for a final agreement, with some remaining bracketed language and gaps yet to be negotiated.

The need for an extension is not surprising. In fact, the interim agreement, known as the Joint Plan of Action, that was reached last November specifically provided for the possibility of an extension beyond the original target date. The matters being negotiated are complicated and highly technical, from the design of nuclear reactors to the details of international financial transactions.

Both sides are negotiating seriously. The Iranian side has demonstrated its seriousness through its compliance, as confirmed by the International Atomic Energy Agency, with all of its commitments under the Joint Plan of Action. It also has demonstrated its seriousness through its acceptance already of lopsided concessions while gaining little so far in return (see next key fact). Nothing in the history of these talks, or of the history of the Iranian nuclear issue before the talks began, suggests that Iran needs to be squeezed harder to get it to negotiate earnestly and flexibly.

Iran already has the biggest motivation to conclude the negotiations swiftly. The P5+1 (the United States and its negotiating partners) clearly got the better deal in the interim agreement. The Joint Plan of Action froze or rolled back the aspects of Iran's nuclear program with the most concern regarding possible weapons proliferation, as well as introducing international inspections more intrusive and frequent than what any other nation undergoes. In return Iran got only minor sanctions relief, involving peripheral matters such as airplane parts and access to a small fraction of its overseas financial assets to which it has been denied access. This pattern continues under the additional agreement struck as part of last week's extension of the talks. Iran has committed to hasten the conversion of its remaining supply of medium enriched uranium into reactor fuel plates, which would make it even more difficult to use the material in weapons. In return it gets access to only a small additional slice ($2.8 billion out of more than $100 billion) of its frozen overseas financial assets. The main, debilitating sanctions regarding oil and banking remain in place. Iranian President Hassan Rouhani directly, and Supreme Leader Ali Khamenei indirectly, have a big economic and political stake in reaching a final agreement promptly.

Diplomacy remains the surest way to preclude an Iranian nuclear weapon. The extension does not change this reality. With a negotiated agreement, Iran's nuclear activities would be subject to the most extensive international inspection and monitoring arrangements ever implemented, and Iran would have multiple major motivations not to let the agreement break down. Without an agreement, there would be far less comprehensive inspections, much less of an Iranian stake in keeping its program peaceful, and a political swing in Tehran away from those most determined to keep it peaceful.