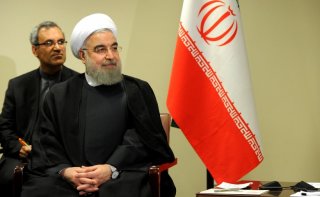 Similar phenomena have arisen with other countries besides Iran. Arthur Schlesinger, Jr. wrote about how “if you shape policy to what you regard as a predestined result, chances are that you will get the result you predestine.” Using a example from the 1980s, Schlesinger noted, “Having decided a priori that the Nicaraguan revolution was a Soviet-Cuban conspiracy, Washington gave the Sandinistas no alternative but the Cubans and Russians.”

None of this is to deny the genuinely bad traits and tendencies that are present in some of the entities involved, regardless of the policies of others toward those entities. There are some valid reasons to consider leaders of the Sandinistas as bad dudes, and there certainly have been bad dudes, and still are, with significant influence inside the Iranian regime. But good statesmanship involves not just taking broader badness as predestined, but instead using one's own policies to encourage what is desirable and to discourage what is undesirable in the policies of others.

It would be nice if the kind of uber-empathetic approach toward the Saudis that is embodied in Ross's assertion about Saudi policy toward Yemen would lead to applying even a fraction of such how-others-see-us awareness to how the Iranians see and respond to U.S. policies, rhetoric, and actions. But unfortunately much American debate about Iran reflects a determination based on other reasons to take sides and to keep Iran ostracized forever, no matter the logical inconsistencies.