Foreign Interference in U.S. Elections is Even Worse Than You Thought 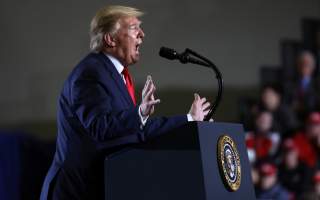 The misconduct for which Donald Trump has been impeached centers on an attempt to drag a foreign government into a U.S. election campaign. That caper has increased public attention to the problem of foreign interference in U.S. politics, but the problem is more extensive than discourse about the impeachment process would suggest.

Consider an indictment last month that got little attention (although a New York Times reporter did give it some coverage) that charged two Lebanese-American businessmen and their collaborators with illegally channeling more than $3.5 million from a foreign government into political campaigns in the United States. The beneficiaries were initially the campaign of Hillary Clinton and then, after he won the 2016 election, Donald Trump. The indictment does not name the foreign government, but it is clear from the context that it is the United Arab Emirates. One of the indicted men has served as an adviser and emissary for the de facto Emirati ruler, Crown Prince Mohammed bin Zayed Al Nahyan. Messages quoted in the indictment strongly imply that the crown prince was directly involved in the influence-buying scheme.

The foreign government that has long been most active in interfering in U.S. politics and U.S. elections is that of Israel. The only reason Israel’s most organized and influential advocates in the United States have not registered as foreign agents is that the influence thus bought has dissuaded U.S. politicians from pushing for such registration.

This week Trump is pushing to new extremes what has become a two-way interference in the politics of the United States and Israel, designed to benefit the empowered right-wing in each country. Trump had already moved far along this line, putting U.S. policy toward Israel and the disputes to which it is a party more closely in line with the preferences of the Likud-dominated Israeli government of Prime Minister Benjamin Netanyahu. The timing of some of Trump’s moves, such as the recognition of Israeli sovereignty over the Syrian Golan Heights and floating the idea of a U.S.-Israeli defense treaty, have seemed designed to help Netanyahu during the last two Israeli elections. As Steve Hendrix writes in the Washington Post, “The prime minister has largely based his reelection campaigns on his ability to push Trump ever closer toward the platform of Netanyahu’s Likud party, from moving the U.S. Embassy to Jerusalem to dropping the view that settlements inherently violate international law.”

With Netanyahu in Washington, Trump has now done more of the mutual political back-scratching between a president who is currently the defendant in an impeachment trial and a prime minister who is under indictment in his own country for corruption. Trump has unveiled his Middle East “peace plan,” which, based on what has been known for some time about the plan, is not at all about peace or reconciliation with the Palestinians but instead is more about blessing Israel’s cementing of its rule over the occupied territories. Trump scheduled the meeting about the plan for the same day that the Israeli Knesset was considering Netanyahu’s request for immunity from the corruption charges.

Partisanship in the United States has impeded in a couple of different ways a full and open discussion of the problem of foreign interference in domestic American politics. When both parties have been involved in this interference, neither wants to talk about it. Both parties were, for example, recipients of the UAE’s largesse. Both have been subjects in Israel’s influence game. That game has evolved in recent years as it has become more of an alliance between the now firmly entrenched right-wing in Israel and the Republican Party in the United States. But the evolution has not gone so far as to incline Democrats to make an issue of, for example, foreign agents who are not registered as such.

The Republican rallying around Trump has impeded discussion in another way, with one of the two major parties never fully and publicly accepting the reality of the Russian government’s interference in the 2016 presidential election, which contributed to Trump’s victory. That non-acceptance has been supplemented by some commentators on a different part of the political spectrum who are justifiably worried about anti-Trump sentiment encouraging elevated tension with Russia but who unjustifiably move from that worry to denial of the fact of Russian interference.

Elections and election campaigns are not the only vehicles for foreign governments to interfere in American politics and policy. Gulf Arab governments, for example, have attempted to buy influence on American policy debate and thus indirectly on American policy through financial support to some Washington think tanks. But elections ought to be of the highest concern to Americans because fundamental principles of representative democracy are involved. The results of U.S. elections are supposed to reflect the interests and preferences of the American electorate, not the interests and preferences of foreign regimes.

Foreign interference in those elections has other deleterious effects on U.S. interests. To the extent the Gulf Arabs have exerted influence, this has encouraged a rigid U.S. taking of sides in regional disputes where U.S. interests are not served by such side-taking. The same is true in even starker and more extreme form with Israel, where Trump’s cascade of political gifts to Netanyahu has yielded no discernible benefit to the United States and instead has only perpetuated a destabilizing regional conflict while identifying the United States with Israeli excesses and sullying any reputation the United States may have otherwise had as a fair-minded mediator.

When the interests of the foreign government diverge from those of the United States enough to favor the weakening of the United States, the harmful effects of interference multiply. This is the framework for understanding the Russian interference in the 2016 election. It remains unclear how much the original Russian motivation was to discredit American democracy and how much to help elect Trump. Both goals were probably involved, with the emphasis shifting the more Trump’s victory started to look feasible. But viewed from today’s perspective, the two objectives go hand-in-hand.

The incumbent U.S. president is today one of the biggest sources of discrediting American democracy, with his levying of charges of voter fraud even after winning an election. On foreign policy matters that would be of most interest to Russia, the Trump presidency has entailed huge disruption to U.S. alliances, to the point of the president becoming a laughing stock. The last three years have seen a precipitous decline in foreign populations’ trust in the United States. For these and other reasons, Vladimir Putin can conclude that the meddling in the 2016 election was a good investment that has paid him ample dividends.

Trump’s added twist to foreign interference—the twist that is the focus of the current impeachment trial—was to try to pressure a weak foreign government into interfering in the next U.S. election in a way that it would not have otherwise. But the larger problem of interference goes well beyond that one instance and beyond Trump. It deserves more attention than it has received.