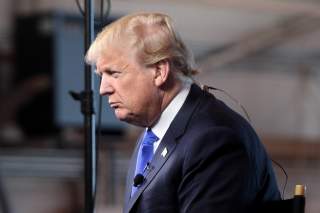 With the turmoil of the first month of Donald Trump’s presidency providing a cascade of headlines and things to be alarmed or outraged about, it is easy to lose sight of any one of those things.  It also is hard to sustain an appropriate level of outrage, amid ever more attention-grabbing headlines about the latest turns in the turmoil.  One of the things worthy of outrage is Trump’s flouting of ethical standards, with almost no effort made to separate his private financial and business interests from the public interest.  This is a major problem even just as far as Trump’s own holdings are concerned, without getting into how the example he sets is ushering into office some cabinet-level appointees, such as his secretary of education, with conspicuous conflicts of interest.  Trump’s going through the motions of having his adult sons manage his business does nothing, of course, to ameliorate the problem.  Even if one makes the unlikely assumption of no communication between father and sons, it is still Trump’s own wallet that fattens or slims according to how well the business does.

The specific problems that arise within the United States involve, for example, Trump’s club in Palm Beach, where the membership fee has doubled since Trump was elected and where the attraction of membership—and thus the fattening of Trump’s wallet—is likely to increase further if the members keep getting the thrill of seeing, as they are dining, responses to such things as North Korean missile tests being worked out before their eyes in the same dining room.

With foreign policy, the problems entail the holdings and financial relationships of the Trump business overseas.  One, but only one, of the places where the problems arise is Russia.  Trump has tried to deny that he has any business equities there.  He should not be believed, both because he habitually lies and because his own son has observed how in recent years “Russians make up a pretty disproportionate cross-section of a lot of our assets.”  What can be dug up about the Trump organization’s murky and complex business dealings with Russians gives no reason to suggest that the ties have ended.

Another way in which the problem can arise is for the U.S. official to be beholden to a foreign regime whose cooperation and support are necessary for the privately owned business to thrive.  The stake in the private business, in other words, gives leverage to a foreign regime over U.S. policy.  The leverage can be used in different ways.  Maybe it means an extra degree of deference to that regime that permeates everything the U.S. official, with his business interests in the back of his mind, does that is relevant to that country.  Or leverage can be used more directly by the foreign regime, implicitly or explicitly threatening to end permits, protection, infrastructure support, or other forms of cooperation that the business needs, unless the regime gets the sort of U.S. policy it wants.

Yet another form the problem can take is for the leverage to be exerted by private interests in the foreign country with which the American is doing business.  Maintaining good business-to-business relationships, in other words, is what trumps well-founded U.S. foreign policy.  Sometimes what the foreign business interests want gets directly into, for their own pecuniary reasons, matters of foreign policy.  We may be seeing this happen with some of Trump’s Russian business partners pushing on the U.S. Government a “peace plan” for Ukraine with a pro-Russian and anti-Ukrainian flavor.

In addition to these direct consequences of the sort of ethical breach that Trump exhibits, other indirect consequences may result.  One is doubt among foreign governments who—knowing the conflicts of interest present—wonder what really is motivating U.S. foreign policy.  There may be damage to U.S. credibility as the United States tries to enlist support from allies who ponder whether what they are being asked to support serves a common interest or serves Trump’s business interests.

Another possibility, given Trump’s record of lying, is blackmail by a foreign government that knows the truth about his business dealings in that government’s own country.  There don’t have to be any prostitutes involved—only the possibility of revealing foreign ties that compromise the integrity of U.S. foreign policy and that the U.S. president has denied.

It’s not just Russia.  Within the past few days the Trump sons participated in an opening ceremony for a new Trump golf club in Dubai.  The sons’ comments and the attendance at the event underscored how important the support of the Dubai government is to success of this enterprise.  In other words, the regime has leverage.  Dubai may commonly be labeled a friend of the United States, but Dubai’s interests are not the same as U.S. interests.  It is party to local conflicts, in a conflict-prone region, to which the United States does not have comparable reason to be a party.  To the extent that the preferences of Dubai’s rulers are deferred to in the interests of protecting a Trump business interest, U.S. foreign policy has been corrupted.

The very idea of any U.S. president putting his personal financial interests ahead of the U.S. national interest, to the extent of refusing to divest himself of overseas business interests, is sufficient reason the public ought to be outraged.  To the extent such a conflict of interest affects real U.S. foreign policy decisions, as it well may, this is all the more reason for outrage.