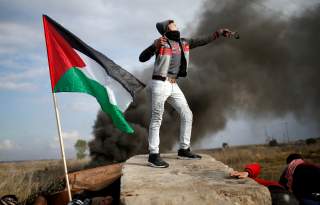 Two recent pieces of news highlight, one indirectly and the other directly, the plight of inhabitants of the miserable patch known as the Gaza Strip.  The indirect report involves demographic data, based on official Israeli numbers that surfaced in a parliamentary inquiry, showing that in all the land between the Mediterranean and the Jordan River, there are now about as many Arabs as Jews.  It has long been obvious that this point would be reached, given that the population of Palestinian Arabs has been growing faster than that of Israeli Jews (though not as fast as ultra-Orthodox Israeli Jews, who pose a separate set of questions for Israel regarding such issues as military service and payment of taxes).  The trend means that from this point forward, Arabs will constitute an ever-larger majority in the land that Israel controls.

This demographic fact underlies the oft-cited trilemma in which it is impossible for Israel to be Jewish, to be democratic, and to be in control of all the land from the Mediterranean to the Jordan.  Israel can be any two of those things, but it has to ditch one of the three.  The current right-wing Israeli government clearly has decided to ditch democracy, although the painful truth of the trilemma and of the implications of embracing apartheid rather than equal political rights for all weighs heavily on the thoughts of many other Israelis.

But if the 1.8 million inhabitants of the Gaza Strip can be separated from the equation, then the demography doesn’t seem so stark.  In the rest of the land Israel controls, Jews would still outnumber Arabs for some time.  Such equation-splitting is not painful to Israel.  Miserable and overcrowded as it is, no one other than the Palestinian Arabs themselves wants Gaza.  Most Israelis probably would be happy to see Egypt, which administered the Strip before the 1967 war, take it over, but Egypt doesn’t want it either.

By using its control of the land, sea, and airspace to isolate the Gaza Strip and to impose a suffocating blockade on it, the Israeli government has been pursuing multiple objectives.  It hopes, through collective punishment of the entire Gazan population, to reduce support for the Palestinian group Hamas.  And isolating Gaza from the rest of Palestine is a way to try to keep it cognitively and politically, as well as physically, out of that nagging demographic equation.

The other piece of news, which is directly about the Gaza Strip and its misery, is, of course, about the Palestinian demonstrations near the border fence that took a lethal turn when Israeli forces on the other side of the fence fired into the crowds of protestors, including with live ammunition.  Israeli officials have pointed to some armed Gazans who had managed to penetrate the fence on earlier occasions.  And late on Friday—the day of mass bloodshed—two Hamas gunmen tried to cross the border before Israelis killed them, but they evidently were separate from the crowds of protestors.  Some young men in the crowds slung rocks at the Israeli troops, and some burning tires were rolled toward the fence.  Otherwise, however, the tens of thousands of Palestinians who came to the border were engaging in an angry, but peaceful, protest.

On bloody Friday, no one managed to penetrate the border into Israel.  There were no reported Israeli casualties.  The casualties, from Israeli fire, among the Palestinian protestors were 17 killed and about 1400 wounded.  Anecdotal reporting included such episodes as a 19-year-old shot dead by Israeli forces while running away from the border fence, carrying a tire.

In other situations of protest against apartheid, this would be called a massacre.

To get an authoritative account of the events along the Gaza border, going beyond anecdotes and unfiltered by each side’s biases, a third-party inquiry would be useful.  If Israeli Prime Minister Benjamin Netanyahu really believed that the Israeli Defense Forces were "the most moral army in the world", then he would welcome such an inquiry.  But his government has instead refused to permit one.  If the Trump administration were interested in uncovering all the facts of this tragedy, then it would support a United Nations Security Council statement calling for an independent inquiry.  But instead it blocked the statement.

The events along the Gaza border underscore how, no matter how hard Israel may try to wall off the Gaza Strip not only from its own territory but from our consciousness and from the universe of live and festering political issues, it cannot succeed.  1.8 million desperate and miserable people cannot be walled out of existence.  The desperation came through in some of the anecdotal reporting, such as of other young men who said they would rather die while protesting than to continue living in hopelessness.  Some of them indeed voiced displeasure with Hamas, but the tens of thousands were aiming their protest at Israel, not Hamas.  Ultimately this is not a Hamas problem.  If Hamas were to vanish tomorrow then probably a more radical group would pick up the banner of resistance.

The 1.8 million are not just a term in an equation.  They are human beings who feel pain and have aspirations.  They cannot be wished away.

Image: A Palestinian demonstrator uses a slingshot to hurl stones towards Israeli troops during clashes at a protest against U.S. President Donald Trump's decision to recognize Jerusalem as the capital of Israel, near the border with Israel in the east of Gaza City December 15, 2017. REUTERS/Mohammed Salem