Getting to Yes With North Korea 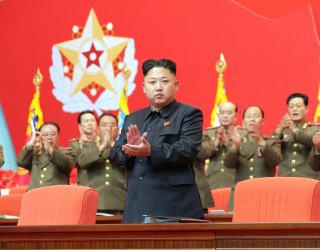 The new United Nations Security Council resolution on North Korea was mainly a U.S.-promoted show, even though it passed unanimously.  The principal story of the resolution concerned how severe a set of sanctions the United States could get enacted, and how much it needed to water down the resolution to get support from other members of the council and especially to avoid vetoes from China and Russia.  Press coverage of the council’s action and the diplomacy surrounding it was all about the extent of the sanctions, what they did and did not cover, and how they went beyond previously enacted sanctions.  There was almost no mention in the coverage of what the sanctions were intended to accomplish.

This imbalance of attention mirrors the habitual American approach to sanctions, in which almost all discussion and debate is focused on finding new ways to inflict punishment on whatever country is the target of the sanctions, with far less attention to exactly what the government of that country would have to do to avoid or remove the sanctions, and even less attention to whether it is realistic to expect such a change in the targeted country’s policies.  Too often the subject is treated as if the purpose of sanctions is to express our displeasure with a foreign regime—which, in terms of domestic politics, often really is the purpose.

The Trump administration’s policy on North Korea has so far been firmly in this unfortunate tradition of giving much attention to threats and punishment but far less to defining carefully exactly what we expect from the North Koreans.  Trump’s much-noticed threat to inflict “fire and fury like the world has never seen” was what he said would be the response if Pyongyang did not heed his warning that it “best not make any more threats to the United States”.  What exactly is the line being drawn here, which North Korea is not supposed to cross lest it receive the fire and fury?  North Korea makes threats against the United States all the time.  Is it supposed to cut out the inflammatory rhetoric?  If it is actions and not just rhetoric that are deemed to constitute threats, exactly which actions?  North Korea does plenty of objectionable things, many of which could be considered threatening, but are they all worthy grounds for employing the fire and fury?  We are left to wonder, and so are the North Koreans.

The imposition of sanctions, as with other formation of foreign policy, needs to begin with a clear conception of what we want from the other state.  There must be prioritization to separate what would be nice to get from what is vital to get and for which the most potent foreign policy instruments should be employed.  There needs to be careful analysis of what is feasible in terms of what policy changes by the targeted regime would be realistic to expect.  That in turn requires analysis of why that regime is doing what it is doing, and what incentives, positive as well as negative, could be expected to get it to change course.  What sanctions or other measures are sustainable in terms of support from other countries is yet another important consideration.

Perhaps such policy analysis has already been thoroughly performed inside the administration, although there are few public indications that it has.  What certainly is missing is a specific, feasible proposition to which North Korea could say “yes” to get out, even partially, from under the sanctions gun.

The new Security Council resolution does include a bill of particulars about objectionable North Korean behavior, but the list is so sweeping and peremptory that it is unrealistic to expect even a heavily punished Pyongyang to change course in deference to all the demands.  The resolution uses language such as “immediately abandon all nuclear weapons and existing nuclear programs” and “immediately suspend all activities related to its ballistic missile program,” and even gets into things such as “the necessity of the DPRK respecting and ensuring the welfare and inherent dignity of people in the DPRK”.

Getting rid of all the nuclear weapons would surely head any list of important and desirable changes in what North Korea does today.  But if there were even a faint hope of that happening, substantial positive incentives and not just threats and sanctions would be required.  There are ideas available along that line, but there is no indication the administration has communicated such incentives to North Korea.  Probably some combination of security guarantees, recognition of the North Korean regime, and formal conclusion of the Korean War would be needed to keep even a faint hope alive.  Threats of the fire and fury variety are more likely to be disincentives to Pyongyang giving up a nuclear force that is intended at least in part to be a deterrent, as North Korea’s nukes surely are.

The historical record is not encouraging regarding any possibility of states that already have their own nuclear weapons ever giving them up.  A possible precedent involved the non-Russian republics of the Soviet Union that had nuclear weapons on their territory at the time of the union’s dissolution (Belarus, Kazakhstan, and Ukraine).  But that was a special case involving the break-up of the USSR, and the three republics in question did not have operational control of the weapons.  Moreover, the experience of Ukraine, where Russia does not appear to have complied with the security guarantees that were part of the agreement under which Ukraine surrendered the weapons, is hardly an encouraging precedent for other nuclear weapon-possessing states, including North Korea.  Another possible precedent was South Africa’s dismantling of a small inventory of nuclear devices in 1989, but that was in anticipation of a peaceful change of regime of a sort that the Kim regime in North Korea would never countenance or contemplate.

Many observers have concluded, with good reason, that North Korean nuclear weapons are a fait accompli and that U.S. policy must be based on deterring their use rather than seeking in vain their complete elimination.  That leaves open the question of what all those sanctions should be used to try to achieve.  There are several conceivable answers to that question, involving such things as limits on testing or the range of delivery vehicles.

But the final answer to that question is uncertain, and the Trump administration has done little or nothing to bring us closer to such an answer.  What is certain is that any worthy policy or strategy needs to begin with a clear concept of what we are trying to achieve, with adequate attention given to what is realistic in terms of North Korean motivations and the cooperation of other states.

Also certain is that no matter how much pressure is applied, the pressure will accomplish nothing if neither we nor the North Koreans know what it is supposed to accomplish.  Or as Yogi Berra said, “If you don’t know where you’re going, you’ll end up someplace else.”