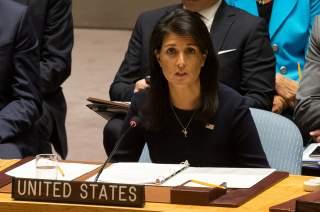 The Joint Comprehensive Plan of Action (JCPOA), the agreement that limits Iran’s nuclear program, is for Donald Trump one more of the Obama administration’s achievements to be trashed.  It goes alongside the Affordable Care Act, the Paris climate change agreement, and other measures (most recently the “dreamers” program involving children of illegal immigrants) as targets for trashing because fulfilling campaign rhetoric is given higher priority in the current administration than whether a program is achieving its purpose, whether there are any realistic alternatives available, or what the effects of the trashing will be on the well-being of Americans and the interests and credibility of the United States.

Nikki Haley, whose foreign policy experience has consisted of these past few months as the U.S. permanent representative to the United Nations, has assumed the role of chief public trasher of the JCPOA for the administration.  Evidently no demands on the time of the U.S. ambassador in New York, from the issue of North Korea (which has real, not imagined, nuclear weapons) to the war in Syria were too important to keep her from giving a speech at the American Enterprise Institute that represented the administration’s most concerted and contrived public effort so far to lay groundwork for withdrawing from the JCPOA.  Haley has warmed to this cause both because of her own previous parochial interests, including those associated with financial contributions she has received, and because it is a convenient vehicle for playing to Trump’s urges.  Haley evidently feels no obligation to perform as one of the “adults” in the administration to whom the country looks to contain those urges.

The speech at AEI was Trumpian in some of the tactics it employed.  The performance should cement the ambitious Haley’s place on Trump’s short list of candidates to become secretary of state once Rex Tillerson’s unhappy and probably short tenure in the job ends.  The speech also used more twisted versions of familiar rhetorical twists that have been heard before from diehard opponents of the JCPOA.

Once familiar Trumpian tactic is blatant lying.  Haley lied when she said that the JCPOA “gave Iran what it wanted up-front, in exchange for temporary promises to deliver what we want.”  The truth is that Iran had to fulfill most of its obligations first—including disposing of excess enriched uranium, disassembling enrichment cascades, gutting its heavy water reactor, and much else—before the agreement was fully implemented and Iran got even a whiff of additional sanctions relief.  There is no correspondence between reality and Haley’s assertion that the agreement was a great deal for Iran but “what we get from the deal is much less clear.”  What we get is a cementing closed (even literally, in the case of the disabling of a reactor that otherwise could have produced plutonium) of all possible pathways to an Iranian nuclear weapon.  This isn’t just a promise; this is major, material, already implemented change.

A rhetorical challenge that Trump, Haley, and the drafters of her speech have faced is how to justify reneging on an agreement that, as the inspectors of the International Atomic Energy Agency have confirmed, Iran is observing.  One of the techniques used in the speech was to sow confusion about exactly what Iranian compliance entails.  Haley tried to make the subject sound like it is more complicated than looking at the terms of the detailed and laboriously drafted JCPOA and having IAEA inspectors, through continuous and highly intrusive monitoring, determine whether Iran is complying with the terms.  This subject is more of a “jigsaw puzzle,” said Haley.  “Iranian compliance involves three different pillars,” which are the JCPOA, United Nations Security Council Resolution 2231 (which was the international community’s formal endorsement of the JCPOA) and the Corker-Cardin legislation that governs the relationship of Congress to the president on Iran policy.

The big problem with Haley’s formulation is that Iran is a party to only one of those three “pillars,” the JCPOA.  The requirements for Iranian compliance are found entirely within the JCPOA.  Certainly Iran cannot be held responsible for whatever happens to go into U.S. legislation enacted by the U.S. Congress.  Some of the clauses in Resolution 2231 do reflect understandings reached during negotiation of the JCPOA, but the resolution does not incorporate additional obligations that Iran negotiated and undertook.  The much-commented upon clause regarding ballistic missile activity was carefully and intentionally drafted so as not to constitute a legal obligation.

Haley tried to blur together the subject of missiles with nuclear activities by saying that “missile technology cannot be separated from pursuit of a nuclear weapon.”  Yes it can, and it has, not just by Iran but by other nations.  Haley’s assertion disregards how, given Iran’s experience in the war launched against it by Iraq, and its situation in facing neighbors today with superior air forces, it is unrealistic that Iran ever would accept curbs on its development and possession of missiles without similar restrictions on others in the region.

Most importantly, Haley’s assertion disregards how, in the absence of nuclear weapons, Iran’s missile activity would barely merit an asterisk on any list of U.S. national security concerns.  She apparently missed the irony, or the actual lesson that should be drawn, when she followed her comment about missiles and nuclear matters by saying, “North Korea is showing the world that right now.”  If a JCPOA-type agreement for North Korea were in force right now, precluding the development or possession of any North Korean nuclear weapon, Pyongyang’s missile tests would receive a small fraction of the market-shaking attention they receive.

Another technique in the speech was innuendo, in generating suspicion that there are Iranian violations that somehow, despite the intrusive inspections, we don’t know about.  One version of the innuendo was the notion that supporters of the JCPOA are so anxious to preserve the agreement that “the international community has powerful incentives to go out of its way to assert that the Iranian regime is in ‘compliance’ on the nuclear side.”  But Haley—who presumably has access to all the classified information on the subject—gave no evidence of any violations, or even any hint of what such an Iranian violation would look like.

Further innuendo about unseen violations involved a topic Haley has talked up on earlier occasions, which is inspection of sites not declared as nuclear sites.  She quoted an ill-considered Iranian remark about not giving foreigners the run of Iranian military installations, and strove to create the impression that Iran is denying access to suspect facilities.  It is not.  She said nothing about the carefully-defined procedure that the JCPOA lays out for inspection of non-declared sites.  If the IAEA is given reason to suspect prohibited activity at any such site, it can request a visit.  If the IAEA and Iran cannot agree on such a visit, the matter is ultimately decided in the Joint Commission—where Iran can be outvoted, and the inspection authorized.  There has been no Iranian denial of access, and again Haley provided no reason for suspecting any violations.

The speech offered the usual litany of bad things Iran has done through the years, as part of the usual effort by opponents of the agreement to make people feel as hostile to Iran as possible.  Never mind that, also as usual, Haley provided no context for any of this bill of particulars or any of the reasons Iran has done what it has done. The most pertinent lesson that should be drawn from this, and that Haley failed to draw, is that the more concern one has about Iranian activity in the Middle East, the more important it is to keep closed all of its possible avenues to an Iranian nuclear weapon.  That’s exactly what the JCPOA does.

Haley talked about past Iranian deception and concealment on nuclear matters.  Again, she failed to draw the obvious and important conclusion: that this is all the more reason to have the unprecedently intrusive inspection arrangement that the JCPOA created.  In fact, it is the inspection arrangement, and the assurance it provides, that is probably the most important feature of the agreement, more so even than the specific limits placed on elements of the Iranian program.

The speech used other hoary techniques to confuse and deceive—the use of straw men, for example, to make it seem that supporters of the agreement had misled people.  “We were promised an ‘end’ to the Iranian nuclear program,” Haley said, but all we got was “a pause.”  She never identified who supposedly made such “promises,” and never provided any evidence of them having been made.  It always was quite clear from the beginning of the negotiations that produced the JCPOA that zero enrichment of uranium was not a feasible goal and that the agreement would be a limitation on a peaceful nuclear program and not the elimination of it.

Haley’s speech strongly suggests that at the next due date for certification in October, the administration will, even if it still has no evidence of Iranian violations, withhold certification by taking advantage of a vague clause in the Corker-Cardin legislation that refers to whether continued sanctions relief is appropriate, proportionate, and in U.S. national security interests.  The administration will assert, as Haley did in the speech, that this will “not mean the United States is withdrawing from the JCPOA.”  The speech also had a bizarre passage that tries to blame the terms of the agreement itself for death of the agreement, the idea being that re-imposition of sanctions is the only way of penalizing Iranian non-compliance. But if the Republican-controlled Congress re-imposes nuclear-related sanctions, which noncertification would be an invitation for Congress to do, make no mistake: it would be the United States that will have reneged on its commitments and violated the agreement.  If the JCPOA dies, it will be the Trump administration that killed it.