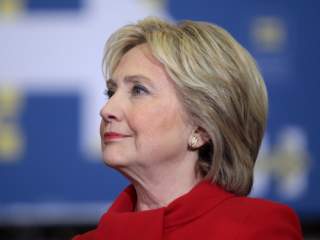 Mark Landler has an interesting extended article in the New York Times about how Hillary Clinton came to views about the use of military force that have made her, in Landler's words, “the last true hawk left” in this year's presidential race. Landler poses the question of Clinton's motivations as a traditional dichotomy between “calculated political maneuver” and “deeply felt core principle,” and suggests that in the case of Clinton's hawkishness it is more the latter than the former. But much of what the article describes is less a matter of principle than of sociology.

Maybe what we are witnessing is to some extent long-term compensation for what otherwise might have been seen as a weak spot for Clinton. Landler relates a story that Clinton herself has told, about being rebuffed when she went to a Marine recruiting office in the mid-1970s and expressed interest in joining the Corps, at least in a reserve capacity, as an attorney. Reporters have cast doubt on the story, but it would not be surprising for a woman, a Democrat, and the wife of a clever draft-evader to see advantage in establishing a connection with the military and establishing herself as a military wonk.

That much may indeed be a calculated political maneuver, but once the maneuvering began, much of the further development of the fledgling into a full-fledged hawk was through a sort of osmosis from the outlook of some of those around her. Her experience as first lady living in the White House, which as Landler notes is “in many ways, like living in a military compound,” deepened her positive feelings toward the military. Then when she really began schmoozing with generals, it was as one of the boys. The former commander of the 10th Mountain Division at Fort Drum, New York relates how when then-Senator Clinton first visited the post, “She sat down, took her shoes off, put her feet up on the coffee table and said, ‘General, do you know where a gal can get a cold beer around here?’ ” She later developed a close relationship with retired Army general and resident Fox News hawk Jack Keane, to whom Clinton quickly took a liking because, according to one former associate, “She loves that Irish gruff thing.” By contrast, she had chilly relationships, and differences over Afghanistan, with some cerebral officers who had risen high in the Army: Karl Eikenberry, the former U.S. military commander and then ambassador there, and Douglas Lute, a White House coordinator on Afghanistan. One of her former aides explained, “She likes the nail-eaters”—people like Keane, Stanley McChrystal, and David Petraeus—“Real military guys, not these retired three-stars who go into civilian jobs.”

The relationship with Keane was an entree into relationships with other active and retired senior officers such as Petraeus, and the advantages accrued to both sides of the relationship. “It worked to their mutual benefit,” Landler writes. “Petraeus was building ties to a prominent Democratic voice in the Senate; Clinton was burnishing her image as a friend of the troops.” There was more mutual benefit in the debates within the Obama administration over policy on Afghanistan. Tom Nides, a former senior official in Clinton's State Department, says that Pentagon leaders looking for a bigger surge of troops in Afghanistan “knew that if they walked into the Situation Room and they had her, it made a huge difference in the dynamics.” In the course of providing that sort of political cover and playing the role of uber-hawk on Afghanistan, Clinton—as later observed by Afghanistan hand Sarah Chayes—“contributed to the overmilitarizing of the analysis of the problem” while never following through on a talked-about civilian surge.

What is disturbing about this whole portrait is how much positions apparently are being determined, if not by narrow political calculations, by dynamics and relationships that really are more the province of sociology than of national security policy analysis. It is disturbing not just as a statement about Hillary Clinton—who, like Barack Obama, is smart enough to be able to do careful policy analysis on national security matters—but as a broader statement of how much of that manner of arriving at positions on the use of military force infuses overall debate on foreign policy. Hillary Clinton is a mainstream candidate who mostly plays according to what Mr. Obama would call the Washington playbook. A pattern such as overmilitarization of analysis of a subject such as Afghanistan is a recurrent problem and not unique to any one figure such as Clinton.

If Hillary Clinton is elected president—a probable outcome—an important question is whether once in office, given the changes in relationships and thus in the sociology, not to mention her sitting at the desk where the buck stops, her postures on use of military force also will change. Will those postures be an output of feet-on-the-coffee-table affinity with favored military officers, or more the product of detached and careful analysis as exhibited by her predecessor?