The History of American Nationalism 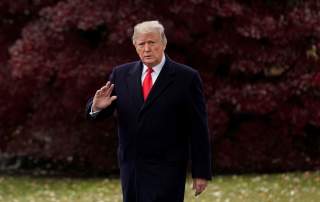 At a recent campaign rally in Houston, Donald Trump broke a linguistic taboo by calling himself, loudly and proudly, a “nationalist.” Leaders of major American political parties generally have avoided applying that term to themselves, no matter how much they figuratively wrap themselves in the national flag and voice patriotic themes. Critical commentary about Trump’s choice of words has focused on the idea that “nationalist” in this context is bowdlerized shorthand for “white nationalist.” Trump’s rhetoric is worthy of condemnation. But to dismiss the terminology is to miss some other important issues about American nationalism.

Americans, since long before Trump, have been a highly nationalist people, notwithstanding their reluctance to apply the label nationalist to themselves. Most often the substitute term, willingly self-applied across most of the U.S. political spectrum, is “American exceptionalism.” The satisfying implication of this term is that nationalism is something in which narrow-minded foreigners wallow and which they apply for narrow-minded purposes, whereas the United States is not just different but better than everyone else and stands for noble and broadly applicable principles. Of course, veneration of one’s own nation as not only different but supposedly better than anyone else is what nationalism is all about, regardless of whether it is called exceptionalism or something else.

There is a genuinely exceptional aspect of American nationalism, however, that dates to colonial times. John Hector St. John de Crèvecoeur, a French nobleman who fought in the French and Indian War before settling as a farmer in New York, published near the end of the Revolutionary War a treatise in which he posed the question “What is an American?” He answered it by saying that Americans “are a mixture of English, Scotch, Irish, French, Dutch, Germans, and Swedes. From this promiscuous breed, that race now called Americans has arisen.” As other races and ethnicities fully entered the picture, the American melting pot has not always smoothly produced a well-blended stew, but the concept that Americans are not defined by blood or ethnicity has endured. Sometimes it has taken a fix such as the 14th Amendment, which recognized as citizens all persons born in the country, even if they once were slaves or something else.

This type of nationalism—based on territory and political principles and not on blood— is exceedingly rare. The multiethnic empires of old represented not melting pots but instead the subjugation of subordinate nationalities to a dominant one. The Soviet Union claimed to be a multi-ethnic state based on political principles of its founding fathers, but besides being ephemeral it was as much a story of Russian nationalism. India has claimed to be the multi-ethnic and multi-confessional home for all South Asians, but it is politically dominated by “Hindu nationalism,” which is a South Asian counterpart of white nationalism.

The more that an American leader’s explicitly avowed “nationalism” implies any kind of exclusion or ethnic preference, the more it is a repudiation of American exceptionalism. Rather than being exceptional, the view being expressed is just one more instance of narrow-minded nationalism, being applied for narrow-minded purposes.

Now that Trump has taken nationalism out of the linguistic closet, Americans should use this opportunity to face more squarely some foreign policy implications of their own nationalism and their reluctance to recognize it as such. Five years ago I wrote an article in The National Interest that characterized the global political era in which the world had entered as the “age of nationalism.”

As for the American nationalism that Americans did not want to call nationalism, I offered this advice: “Americans should understand how much their own first inclinations for interacting with the rest of the world stem from the same kind of nationalist urges that underlie inclinations in other countries, however much the American version is portrayed differently by affixing the label of exceptionalism. They should bear in mind that first inclinations and urges are not always in the best interest of the nation that is the object of their affection and attachment. U.S. policy makers should be continually conscious of how U.S. actions may step on someone else’s nationalist sentiments, eliciting the sort of counteractions that almost always are elicited when competing nationalist perspectives confront each other.”